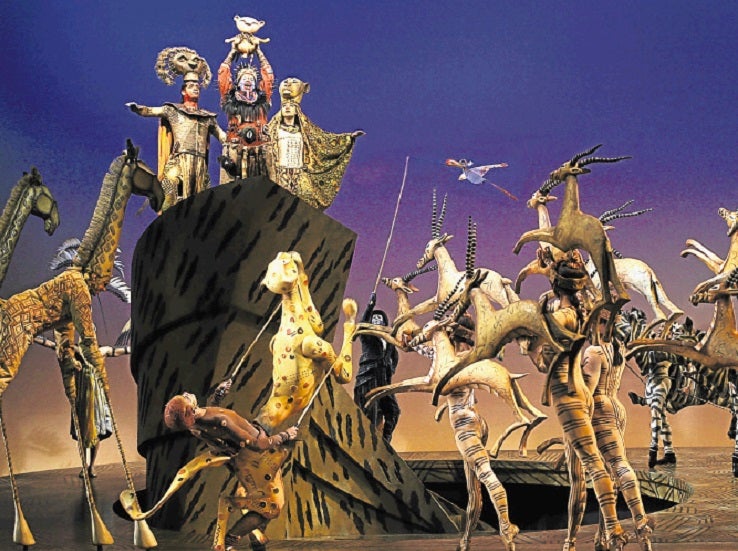 Disney’s “The Lion King” runs at The Theatre at Solaire until May 20. —PHOTO FROM THE MICHAEL CASSEL GROUP

In ‘The Lion King,’ adult shadows in a kiddie pride land

Grand vistas, an endless array of wonderful talking creatures, and heart-stopping action laced with poignant drama: these are the requirements any fantasy blockbuster musical must be able to summon and make believable to the audience if it is to succeed. The stakes are raised higher if the musical in question is based on Disney’s timeless and beloved “The Lion King.”

Will the production live up to the film that one adored watching as a child? At the same time, there’s also the challenge to make the material more relevant to a now grown-up audience (and not only their kids) who just might have become quite jaded over the years.

While director Julie Taymor generally stayed faithful to the material of “The Lion King,” she also opened it up in remarkable other ways. The touring production brought to Manila by Michael Cassel Group in Australia and Concertus Manila, now playing at The Theatre at Solaire, lives up to the hype of recreating the wondrous magical world of Simba, the cub who would be king.

Arid plains turn into grasslands, a cowering cave reveals a bleak elephant graveyard, and lights-and-sound sleights of hand, along with ingenious costuming, multiply a handful of actors into an army of hyenas or a herd rushing in a crushing stampede.

The costume design deserves particular kudos because it allows the actors to breathe. The costumes merge the actor and the animal character into one, while simultaneously distinguishing them from each other. One becomes a mirror extension of the other, allowing the audience to identify with the characters they’ve loved, while also experiencing the emotion and pathos the actors are exuding.

While the first act is faithful to the film’s plot, Taymor fashions a creative space for certain elements of darkness to come in during the second act. This musical does not pull its emotional punches when it comes to certain death scenes, even if it means showcasing the same slow-motion effect done in the movie, to accentuate the trauma of the characters involved.

Doubt, fear and seething anger rumble under the cutesy proceedings, which makes Calvyn Grandling’s adult Simba a tortured youth with a secret past that not all the “Hakuna Matata” sing-alongs can eliminate. Grandling can be emotionally austere, but that grimness is fortunately lightened by the smart antics of André Jewson’s Zazu, Jamie McGregor’s Timon and Pierre van Heerden’s Pumbaa.

Taymor also adds a bit of back story to some of the characters to flesh them out. Antony Lawrence’s ignored Scar navigates himself neatly between cunning conniver and foppish pretender. His menace, once unleashed, is very palpable. The suggestion of a forced marriage between himself and the now-grown Nala also adds more motivation to the latter’s quest for help.

Noxolo Dlamini as Simba’s childhood-friend-turned-love interest exudes regal grace and feline power in the few scenes she is in, even occasionally overshadowing Grandling’s dour disposition.

Mthokozisi Emkay Khanyile’s Mufasa is appropriately the Rock of Gibraltar on whom the whole lion tribe relies. Here, Taymor’s recreation of his stellar resurrection outshines that of the movie’s. The leonine visage that solidifies on stage, taking up its length and breadth, is a monument that wakes up Simba not just to what he has to do, but to what he truly is.

It is the one takeaway that both adults and children can feel and realize more in this theatrical experience than in the original film.

At times, Taymor’s apparent desire to balance the material’s childhood fun with its more adult undertones can feel unsettling. But, overall, in keeping with the foundational “Circle of Life” motif, that complex equilibrium is maintained, elevating “The Lion King” from the mere nostalgic extravaganza it could have been into something grander, more darkly adult.—CONTRIBUTED

“The Lion King” runs at The Theatre at Solaire until May 20. Visit ticketworld.com.ph.