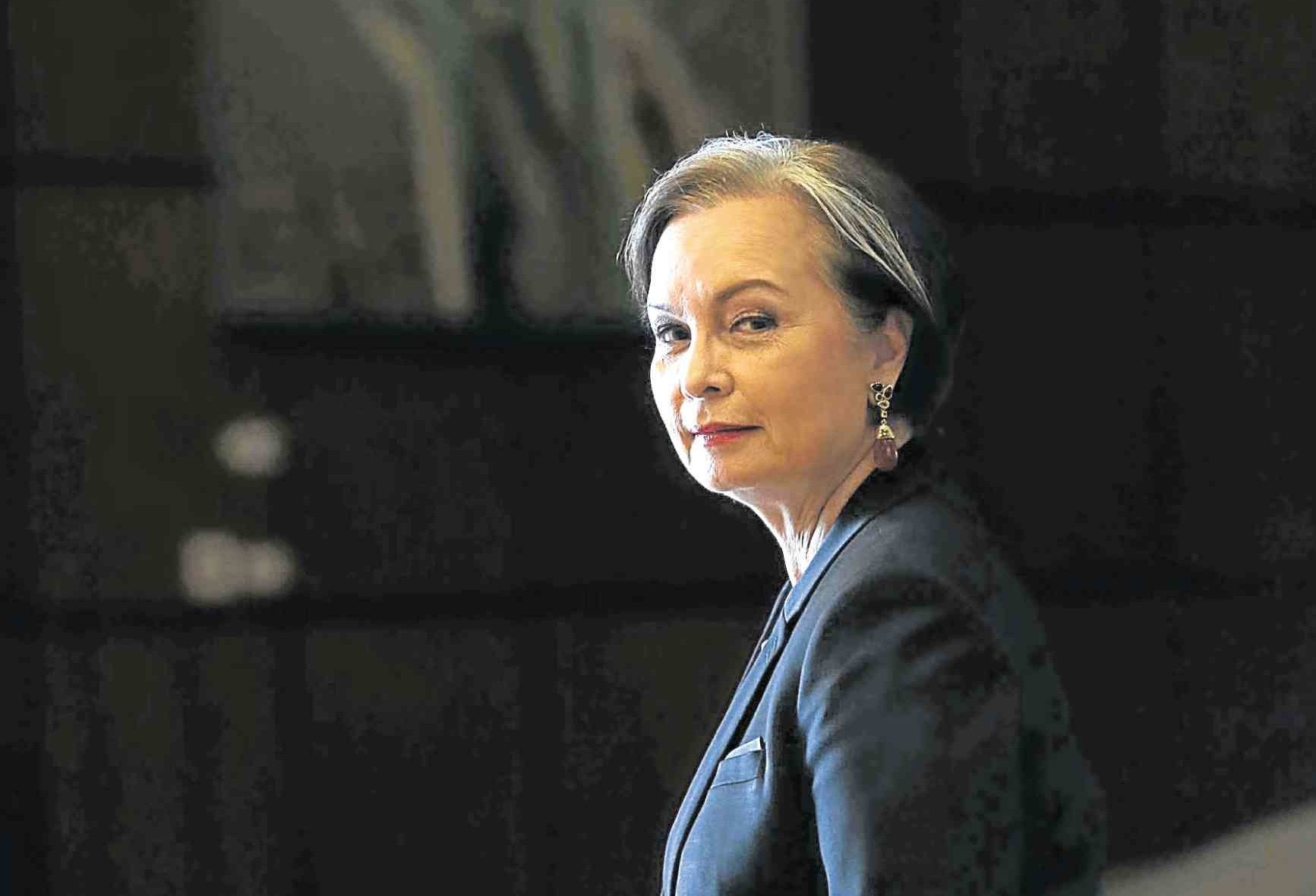 “You need a cultured mind to think out of the box,” says CCP’s Margie Moran Floirendo. —PHOTOS BY LYN RILLON

New CCP chair Margie Moran Floirendo: The truth is in the arts

It’s easy to get lost inside the Cultural Center of the Philippines (CCP), if you don’t know your way around.

The giant, concrete slab designed by Leandro Locsin looks simple from the outside, but inside it’s a maze of corridors, walkways, tunnels, mezzanines, basements and sub-basements, backstage areas and rehearsal studios.

Margarita “Margie” Moran Floirendo navigates this terrain like a native, which she can now claim to be, after 10 years as president of Ballet Philippines, the CCP’s resident dance company.

The former Miss Universe will need all of her surefootedness and poise, now that she’s been appointed chairperson of CCP, taking over from advertising veteran Emily Abrera.

It’s an opportune time to take the helm.

Bidding has started for the first cluster of new buildings under the CCP Complex Redevelopment Plan, a long-term, multibillion-peso infrastructure project that promises to transform the sprawling, 62-hectare CCP complex on Roxas Boulevard into a modern, world-class center for Philippine art and culture.

The government hopes to finish the first two structures, an Artist’s Center and a Performing Arts Theater, in time for the CCP’s 50th anniversary next year, a milestone which will be marked with a yearlong celebration.

Floirendo will then have to oversee the renovation of the CCP’s main building itself, which is beginning to show its age. The once-gilded ceiling panels are filmed over with patina, and the theater’s blood-red carpeting has faded to old rose and is threadbare in patches. The galleries and offices are, to be frank, substandard after decades of haphazard modifications.

Her greater challenge, however, will be making the CCP relevant to a new generation of young Filipinos.

When then President Ferdinand Marcos inaugurated the CCP in 1969, Sen. Benigno Aquino Jr. criticized it as an institution for the elite and not for the ordinary Filipino.

Fifty years later, the CCP still has to prove Aquino wrong each time it releases its calendar of events.

PDI Lifestyle: People want to hear a vision statement on what the CCP’s role will be in the new era.

Margie Moran Floirendo (MMF): It’s not really going to change its mission, which is arts for everyone. But our vision is to expand the infrastructure and really promote this area to be the center for all the arts: cinema, visual arts, performing arts.

It also needs to become a pillar of education and tourism, because when you go to a country, after seeing the sights, you look for the soul of the place. If you go to Europe or America, you look for ballets to watch, or Broadway shows, because you really feel the place when you experience the art scene and culture in each city.

That’s what we should have in Manila. We are rich in talent, but we lack organization, we lack infrastructure, we lack publicity. This is the only national theater in the entire country.

I think people, and even the government, have to look at culture as an industry. There is an economic component. The National Economic and Development Authority has made a study that found that the culture industry contributes up to 5 percent of Gross Domestic Product. There’s a huge number of people who are involved in the arts—artists, producers, directors, stage hands. If they look at it that way, as a pillar of the economy, the support will be more profound.

Do you think the way people think of culture has changed? It used to be seen as for the elite.

MMF: At that time, this was the only beautiful structure, and it was detached from much of the population. Eventually, during the time of Lucrecia “King” Kasilag and Bing Roxas, it became more popular, and the CCP really became the institution of the arts for the people. When people come here, specially those from lower-income groups, they really dress their best. Government employees get a discount when they come to watch the shows, as do senior citizens. We also get sponsors for public school students and people from the barangays to watch shows. So it has become more masa-oriented and not just for the elite. But we still need the money of the elite to subsidize the cost of tickets for the lower-income groups who also appreciate the arts.

MMF: I had to find the missing link. I needed audiences to come. I got sponsors for students first, so they could come and watch the shows. When you are able to fill the theaters, it’s easy to get sponsors. I also worked it out so we are accredited as a donee institution by the Bureau of Internal Revenue. That means we are able to give tax exemption certificates to companies who donate. And it’s tough to get that. We are only one of two arts companies that are accredited, Ballet Philippines and the Philippine Educational Theater Association.

You get your income from ticket sales. People look for quality shows. It’s also about social media, because people find out about the quality of the shows on social media. When you’re able to do that, people feel it’s a good investment of their money when they buy a ticket. When you’re able to capture that market, you become solvent. You sell tickets, and when you have an audience, then sponsors come in as well. It’s like the chicken and the egg—you have to be successful so people will come to watch your shows, because sponsors don’t like to see empty seats.

The CCP depends on the success of each resident company to bring in the audience, and there are incentives for that. If we bring in the audience, we get grants from different government agencies—the Department of Tourism, the Department of Foreign Affairs, the National Council for Culture and the Arts. When your audience count is high—we average 70 to 80 percent—you get more incentives.

In other words, you have to work for it. It doesn’t come easy. And CCP looks at the resident companies that are successful in bringing in the audience because that’s the mandate—to bring in people to appreciate the arts.

It’s a marketing push. Until you reach that point where you are able to support yourself and earn a profit. Ballet Philippines is profitable, Tanghalang Pilipino is the same, and the Philippine Philharmonic Orchestra is doing much better now than it used to.

There is still this idea that art and culture is a luxury and not a basic need like health or education.

And in an age when there’s a glut in communication, and false communication at that, the truth is in the arts because it appeals to your emotions and your intellect.

So it’s very important to support the arts and to appreciate it. It’s part of education, and with all the problems and issues in the country, you need a cultured mind to think out of the box and to solve problems. You need a different mind-set to solve problems. People may think [art and culture] is a luxury, but it’s really a need in everyday life.