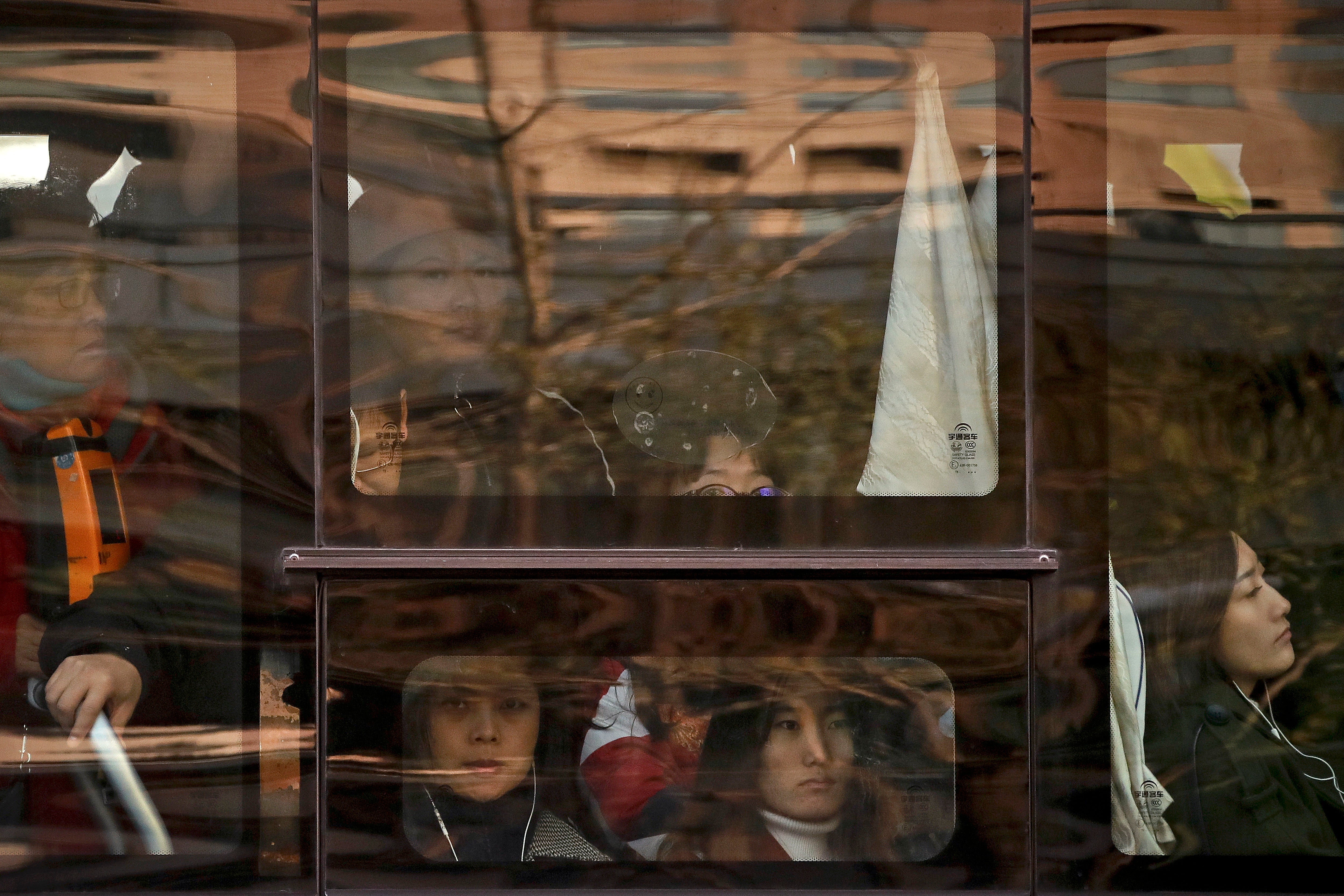 In this Nov. 28, 2017, photo, Chinese women look out of a window of a crowded bus traveling from the outskirts of the capital city during the morning rush hour, in Beijing. Human Rights Watch released the report on Monday, April 23, 2018, gender discrimination is widespread in the Chinese work force, with many hiring advertisements openly calling only for male applicants and using the attractiveness of female co-workers as a draw. Image: AP/Andy Wong

BEIJING (AP) — One job ad for Chinese high-speed train conductors called for candidates who were “fashionable and beautiful.” Another ad targeting men for a job in a Chinese internet company included photos of a female employee pole-dancing.

Gender discrimination is widespread in the Chinese workforce, a human rights group said Monday, with many hiring advertisements openly calling only for male applicants and using the attractiveness of female co-workers as a draw.

Human Rights Watch released its report after looking at more than 36,000 job advertisements posted between 2013 and 2018 from recruiters, companies, and the government.

China bans discrimination in both hiring and job advertising, but enforcement is weak. Government departments are among the offenders, according to the report, with 55 percent of jobs advertised by the Ministry of Public Security last year specifying “men only.” The ministry did not immediately respond to requests for comment.

Sexist hiring practices further widen gaps in both female work participation and pay levels, according to official data, with urban female workers making just 67 percent of what men made in 2010, down from 78 percent in 1990 — a time when the government was loosening control over the economy.

“Sexist job ads pander to the antiquated stereotypes that persist within Chinese companies,” Sophie Richardson, Human Rights Watch’s China director, said in an accompanying news release. “These companies pride themselves on being forces of modernity and progress, yet they fall back on such (old-fashioned) recruitment strategies.”

It’s also a reflection of “deeply discriminatory views about women,” the report said, including that they are less capable than men, or that they are not fully committed to their jobs because some will eventually leave their positions to have a family.

In examining the tech sector, the report pointed to numerous cases where the attractiveness and availability of female workers is used as an inducement for men to apply for jobs.

In one case, online shopping giant Alibaba ran an ad on its official microblog in 2013 enumerating the attributes of its female workers, accompanied by photos of female employees “in sexualized poses, including one engaged in pole dancing,” the report said.

Alibaba did not immediately respond to requests for comment.

An October 2016 article on the official microblog recruitment account of tech company Tencent was even blunter, quoting a male employee as saying, “The reason I joined Tencent originated from a primal impulse. It was mainly because the ladies at human resources and that interviewed me were very pretty.”

Tencent apologized, saying the company values diverse backgrounds and recruits staff based on talent and ability. “These incidents clearly do not reflect our values,” the tech giant said in an email. “We have investigated these incidents and are making immediate changes. We are sorry they occurred and we will take swift action to ensure they do not happen again.”

Despite laws against it, demands are frequently made for physical attributes that have nothing to do with the requirements of the job, another form of sexual objectification. Those can include minimums and maximums for height and weight, “normal facial features” and particular sounding voices.

One notable ad in northern China even called for “fashionable and beautiful high-speed train conductors,” the report said.

The report also cited a 2014 study by the official All-China Women’s Federation in which 87 percent of female college graduates said they had faced at least one form of gender discrimination when applying for jobs.

In some instances, preference is shown for men in the civil service and among kindergarten and elementary school teachers to offset the large percentage of women in those fields, the report said.

It quoted one unidentified kindergarten principal as saying, “The lack of males makes children prone to look at and solve problems according to the way women think and behave.”

Beyond overcoming such attitudes, change is impeded by a lack of determination and enforcement mechanisms, along with obstacles linked to China’s authoritarian politics, the report said.

And unlike in countries where nongovernment organizations often spearhead social change, China is generally hostile to such activity, fearful of challenges to the ruling Communist Party.

“Instead of harassing and jailing women’s rights activists, the Chinese government should engage them as allies in combating gender discrimination in the job market — and beyond,” Richardson said. CC