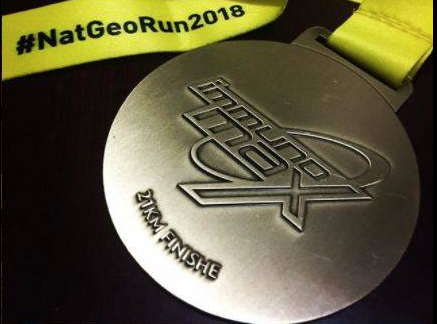 Thousands gather year after year for the NatGeo Earth Day Run, one of the biggest runs to ever be held in the country.

Last Sunday, April 22, runners came together to rise up to the challenge and take part in the Earth Day Run, now on its ninth year, as a powerful show of stance in the environmental causes they hold dear.

The run kicked off at the SM Mall Of Asia Grounds, with just enough categories — 3K, 5K, 10K and 21K —  to suit the pace of runners of all kinds.

It is a widely celebrated event that attracts many, an event that with nine years under its belt, can only be expected to have things down pat. But nobody has a monopoly over inerrancy, and even the people behind the NatGeo Earth Day Run are guilty of their own blunders. At the very least, they tried to show that they know how to admit their mistakes and laugh at themselves, though not everyone is exactly laughing with them.

It seems some finishers of the run, specifically those in the 21K category, were confounded as to why their finisher medals had a typo. The embossing on the back of the medal read “21KM FINISHE” missing the crucial R at the end of the “finisher” word.

The people behind the NatGeoRun2018, however, were quick to address the runners’ concerns, taking to their Facebook page last Sunday to explain: “PUBLIC ANNOUNCEMENT: Wondering why there’s no R on your #NatGeonRun2018 ‘finish’ medal? That R is with YOU and represents Recycling, Reducing, and Reusing for a zero waste future.”

“Ok, we messed up, but we hope you’ll continue your journey to save the planet nevertheless!” added the page.

Netizens were quick to pick on the matter, with many commenting their own takes on the typo blunder. “Dahil ang tunay na R ay wala sa medal kundi nasa puso ng bawat isa. Naks. Padeep (Because the real R is not on the medal but in the heart of everyone. Wow. Deep),” commented netizen Jann Leyba.

“Excusitis. Bakit sa 10k kumpleto may sobra haha pede naman aminin typo ehh (Excuses. Why does the 10K finisher medal have a complete spelling? It even has excess letters. They could just admit there’s a typo),” wrote one Chie Sa-onoy, sharing a picture of his 10K finisher medal. His medal also had a typo, but this time with the letter R tripling.

Another runner, Jen (full name withheld upon request), told INQUIRER.net, “I was so happy approaching the finish line because I trained so hard for this. I was even impressed that NatGeo had staff members waiting for us runners at the finish line to award us with our medals, because other major running events, like the Condura Skyway Marathon, made runners line up to get their medals, despite limping and all from the race. So when I beheld my medal and looked at it, after the staff put it around my neck, I was so disappointed: it read ‘finishe.’ Unbelievable.”

“It may be a small thing for some, but it’s a bit of a shame for the local organizers, since NatGeo is a respected global brand,” she added. “The medal is the only token of appreciation they can give the runners, and we technically paid for it from the registration. We deserve well-crafted medals.”

“Tell me if it’s over reduce recycle etc. I would rather appreciate admitting rather than making an excuse haha but I love Natgeo. Lesson learned, proofread before releasing the item or check molding sa production. When we serve we give our excellence. Are you afraid to tell the truth?” commenter Sa-onoy pointed out.

Meanwhile, other runners didn’t mind the typo, saying running for the cause was the goal. “We ran for the cause, primarily.. Medal was just secondary. Thanks NatGeo!” wrote a certain Evan Lendle Ramos.

“It’s ALL RIGHT!!! Thanks Nat Geo. Let’s all be happy na lang that we finish (sic) the race and be able to participate in this kind of cause. Learn to appreciate things. Isipin nyo na lang French word yan (Just think of it as a French word) hahahaha,” joked one Les Larga.

Another netizen Joy Surmion, however, commented a day ago that she didn’t have a medal to begin with. “Baka malagyan yung medal ko? Kase pag dating ko sa finish line para kunin ang medal, sabi sakin ng girl ‘to follow’ ang saklap ng 10K ko.” (Maybe my medal would be correct. When I reached the finish line to get mine, a girl told me it’s “to follow.” My 10K was heartbreaking.)

It seems that apart from the medal typos, the NatGeo organizers also ran out of 10K finisher medals to give out.

“Kelan ko kaya makukuha ang medal, pag nakuha ko kaya yung medal, pwede pa kaya bumalik sa venue para makapagselfie?” Surmion wondered out loud. (I wonder when I’ll get my medal. When I get it, may I still come back to the venue to take a selfie?)

Indeed, it’s a valid question that has yet to be answered. JB