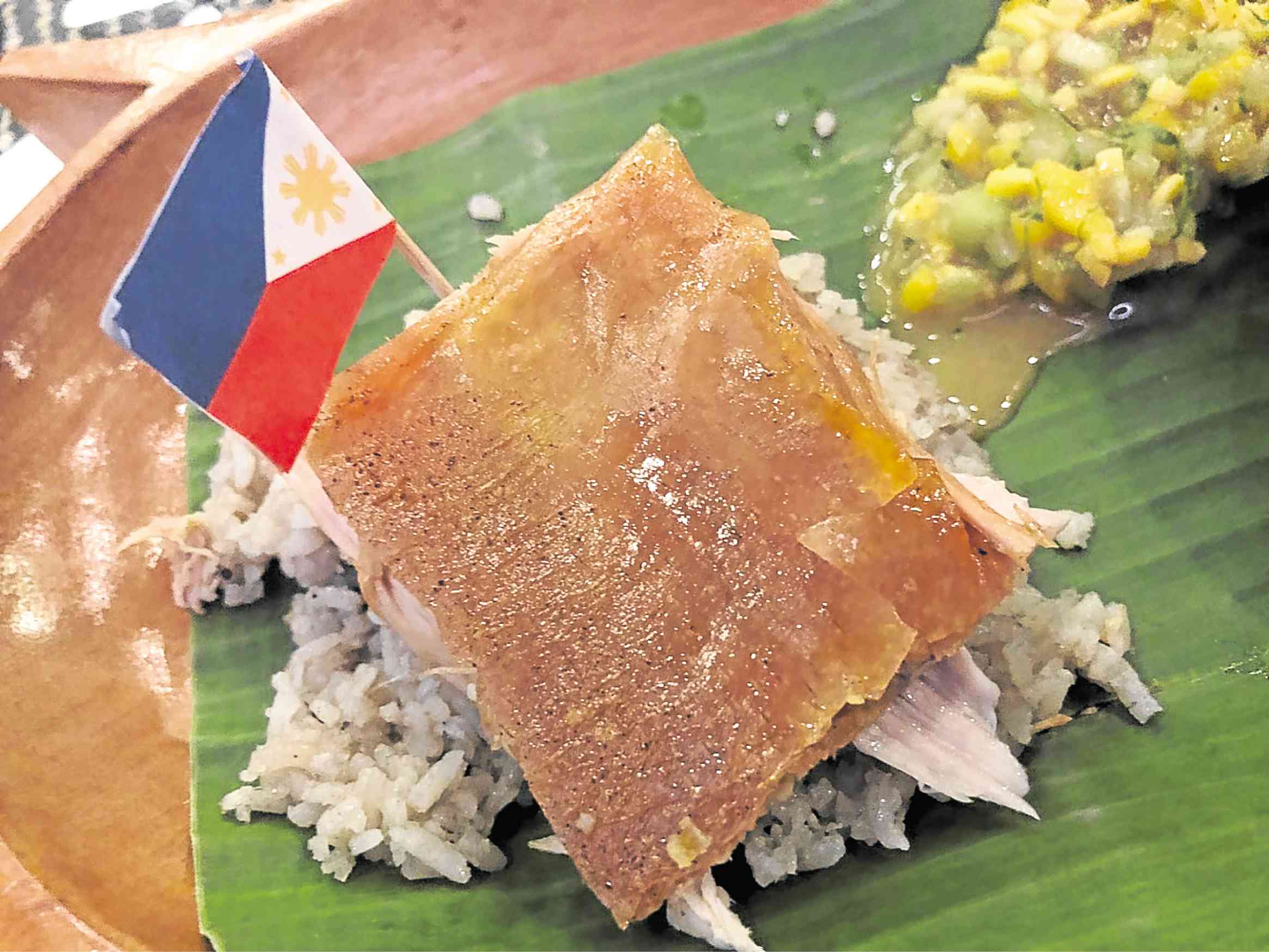 One question that has to be asked on the subject of “elevated” street food is whether it should be elevated in the first place, or if it has any place other than the street.

Is this a problem? Apparently it is, since the whole specter of cultural appropriation looms over everything these days, and street food making its way to fine-dining tables is an elitist appropriation of the food that belongs to the vernacular.

This predicament should, ideally, have been the province only of Food Studies majors in search of a dissertation topic, but unfortunately it has made its way onto the mainstream food stage.

The complicated machinations that have resulted in “Buhay Carinderia,” a government program to “uplift” the humble carinderia—and the program possibly taking the place of Madrid Fusion—has managed to frame the political battle between the two events as elitist versus proletarian, rather than two complementary events that could well run simultaneously.

In the meantime, in the wake of Toyo Eatery winning the Asia’s 50 Best Restaurants’ “The One to Watch” award this year, Jordy Navarra’s signature dish of Three-Cut Barbecue has elicited some controversy as a dish that should cost only P30 at a roadside stand but which is sold 10 times that price in an upscale restaurant.

One problem here is a simple matter of nomenclature: If you say that something is Filipino-style barbecue, it doesn’t matter how much work went into getting the cuts of meat just so, and reducing the broth to form a glaze. It looks like barbecue, it’s called that, and so it should compare on the same footing with Manang’s. These are the same people who tear down an iPhone and say that the total cost of these materials is only about a hundred dollars, so it should sell for that much.

Another issue is expectation. A restaurant is a complete experience, and not just a signature dish. A notable exception, probably, is Dinner in the Sky, whose food is worth probably less than P1,000 while the rest of the P9,900 goes to the fairground novelty of being dangled by a crane to dine 150 feet off the ground.

I’m personally of the opinion that the whole cultural appropriation problem in food is concocted by lunatics with too much time on their hands. It would mean that Western chefs would not be able to make use of the Asian and Middle Eastern influences that are finally making themselves known in the Western kitchen. It would mean that Filipinos like Margarita Fores cannot cook Italian food, or that Nicco Santos is not allowed to use Southeast Asian cooking techniques. Or that Dedet de la Fuente would be off-limits from playing with and riffing on Filipino vernacular cooking, as she and Santos did during their collaboration at Hey Handsome the other day.

De la Fuente is also known as the “lechon diva,” or more prosaically, as the woman behind Pepita’s Kitchen. Her fans—and they are many—can’t get enough of the nontraditional lechon de leche that she serves either at her private dining or catering functions, and, more recently, at events in Hong Kong and Singapore organized by Cheryl Tiu’s Cross-Cultures. She’s even done a pop-up dinner in New York.

Oddly enough, she’s never done a collaboration dinner in Manila, nor has she done something that’s not one of her lechon degustations in a restaurant (though her lechon has appeared as part of buffets at the New World Hotel and Manila Hotel).

Her lechon falls outside of the scope of traditional lechon such as Elar’s or Ulcing’s and Mang Tomas. These are baby pigs, stuffed with absolutely delicious combinations of rice and aromatics (truffles are a firm favorite of everyone’s), and her signature display is of the pig’s belly sliced open like a cargo aircraft’s doors, with a bit of the rice being pulled out, steaming, from within.

Both Santos and De la Fuente wanted to move outside of their comfort zone that night at Hey Handsome for collaboration dinners. As media members, we were the first to try the new menu, but it also meant that the chefs were ironing out the kinks. (As someone in theater told me, preview night is tech rehearsal, opening night is dress rehearsal.)

The night that we went, the menu ran to 18 courses, with long pauses in between—the kitchen was deep in the weeds, and the chefs knew it, and admitted as much. When it is opened to the public, I believe the menu will be pared down and the production de-synchronized, so it is expected to run much more smoothly.

There are several ways of “elevating” the vernacular cuisine. The most common involves fusion: either doing a Filipino dish using imported ingredients (e.g., lamb adobo); or the other way around, doing a foreign dish using Filipino ingredients (mac and cheese using Malagos cheese and with chicharon bulaklak instead of bacon).

What I liked about Santos and De la Fuente’s decision was that they were attempting to refine and enhance local specialities within its own genre, each in their own way. De la Fuente added whimsy: the “abracadabra” dessert emerged from a bowl of grain swirled upon the table, propelled by centrifugal force; pan de sal came as “baon” in little brown paper bags, noodles in a thick, rich coconut cream.

Her dishes alternated with Santos’ minimalism: dinuguan came as a trapezoidal cut of puto with the merest smear of reduced dinuguan. Snails were sharpened with santol. An amber disk topped with spice was a burst of flavors and textures.

Apart from the technical errors, most of the dishes worked. One of the problems with our culture is that we like to put people in boxes. The lechon diva should do only lechon; Hey Handsome should serve only contemporary Southeast Asian food.

Chefs, like other artists working in any other medium, have to evolve. They want to cook up something new. They want to collaborate. And they want to tackle the continuously evolving and controversy-stirring question: What can we do with Filipino food to make it new and progressive and exciting?

This is not “elevating” street food—it’s blurring the distinction between high and low, between the rarified and the everyday, divorced from snobbery, elitism and, crucially, reverse elitism.

Erratum
Last week, I mistakenly identified the ceviche tostadas as ceviche tacos. I apologize for the error. –CONTRIBUTED