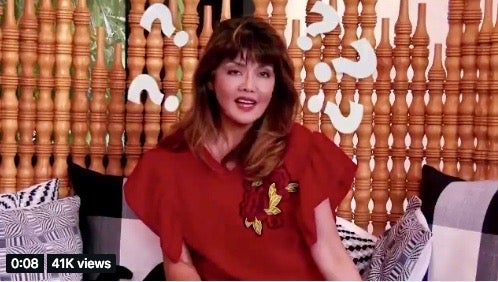 Ilocos Governor Imee Marcos’ attempt at waxing comical came to fruition in the form of a video tutorial which was uploaded on her Facebook page last April 17. The video was about words commonly mispronounced in Ilocano-French, as the governor explained. While the video has since been deleted from Marcos’ Facebook page, netizens were quick to save and share the tutorial on their own social media accounts, with each re-sharing of the video continuing to be viral.

Reactions range from celebrities and netizens finding the video either hilarious or absurd. As of this writing, Gov. Marcos’ Facebook page has yet to release an official statement about the tutorial video and the reactions it elicited.

In the video, Marcos was shown pronouncing Ilocano words and adding her own French accentuation to each. The language lesson included terms like “poque poque” (a vegetable dish), “kabatiti” (patola), “nakiki” (tickled), “pokpoklo” (seaweed), “utong” (sitaw) and “nabayag” (slow), among others.

While the words themselves were innocent in their Ilocano denotation, netizens’ and celebrities’ comments over the video were divided. Radio host Mo Twister shared Marcos’ video on his Instagram account last Tuesday, April 24, and wrote, “The current way to campaign in the PH. #ImeeMarcosforSenate #WhatTheFekFek #WhoIsTheMarcosSocialMediaStrategist?!”

Actress Iya Villania herself commented on Twister’s post and asked, “What is thiiiiiiis?!?”

“@iyavillania you know, 2019 elections right around the corner [smiley] this is the current PH political landscape,” replied Twister.

Another netizen Sandro Marudo also shared the video on his Twitter last April 19, writing, “Funny (or maybe not). Imee Marcos trying hard to be a Kris Aquino.”

Funny (or maybe not). Imee Marcos trying hard to be a Kris Aquino pic.twitter.com/vvklKnVUTT

(Why didn’t she just use Tagalog or English, so she would not be misinterpreted? It’s not only the Ilocanos who will vote for her if she’ll run for the Senate.)

But while Marcos’ video did not sit well with some netizens, others commented on Twister’s post in defense of the video. A certain Gaza (@teung.gaza) wrote, “Uh it’s like when Bisaya uses the word ‘libog’, it means something else in Tagalog but in Bisaya it means ‘confused’…”

“[T]hat’s our dialect, it’s called Ilokano,” defended a certain Agustin (@agustinsherylrose). “Pokpok-lo means it’s one of our seaweeds in the Philippines.” JB