A Syrian dancer's journey from hell to the Paris stage | Lifestyle.INQ ❮ ❯ 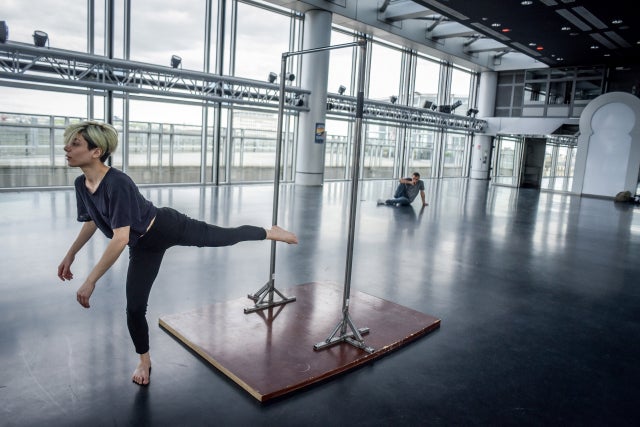 A Syrian dancer’s journey from hell to the Paris stage

Yara al-Hasbani was putting the finishing touches to her make-up for a performance of “Romeo and Juliet” in Damascus when she found out her father had been tortured to death.

It was the moment the dancer’s world turned upside down.

“The little girl in me died at that moment,” says the 24-year-old, who had protested alongside her family against Syria’s regime in 2011 at the start of the brutal civil war.

Six years on, Hasbani may be living a new life in Paris, but her feelings on the war at home spill onto the stage through her poignant contemporary choreography.

Her first Parisian performances, in the public squares at Republique and Trocadero, right by the Eiffel Tower, were tributes to the hundreds of Syrian children killed in a chemical weapons attack in 2013.

“I took inspiration from the photos,” Hasbani says. “I imitated the positions of the children’s curled-up bodies.”

She is just kicking off performances of “Unstoppable”, a 12-minute solo retracing her journey to exile, at a dance festival organised by the Arab World Institute in Paris, running until June 23.

Leaps into a new life

Hasbani, who sports a bleach-blonde pixie haircut and a nose piercing, has slowly rebuilt her life through dance after it fell apart with her father’s death.

His body was returned to the family 23 days after he was arrested by Syrian authorities. They claimed he had died of a heart attack.

When she began receiving threats herself, she knew she couldn’t stay in Damascus.

“Don’t you know who’s talking to you? Watch yourself,” said a voice over the phone.

Hasbani, her mother and two siblings came to France three years ago after they were granted refugee visas in Europe.

In Rochefort, a scenic port town in the southwest, she finally started classes again after breaking off the professional dance training she had begun in Damascus.

She was happy to use anywhere as a stage.

“In Rochefort I’d dance in the parks,” she smiles.

In 2016 she moved to Paris, a city where she found it difficult to settle at first.

But her first visit to the famous Palais Garnier theater opened the emotional floodgates.

“When the curtain went up, I started sobbing,” she remembers.

These days she is busy preparing for her audition to study choreography at France’s National Center for Contemporary Dance in the western city of Angers.

She’s dreaming of one day working with her idol, the Swedish choreographer Alexander Ekman.

But she’d also like to travel to the massive Zaatari refugee camp in Jordan, home to tens of thousands of Syrians, to spread a little joy with dance classes and costumes for the children.

And she has no plans to stop drawing inspiration from the horrific events at home for her choreography.

Her dance may be silent, she says, but she’ll carry on “raising her voice so people don’t forget.” CC

Damascus clubbers dance on in bid to forget war outside