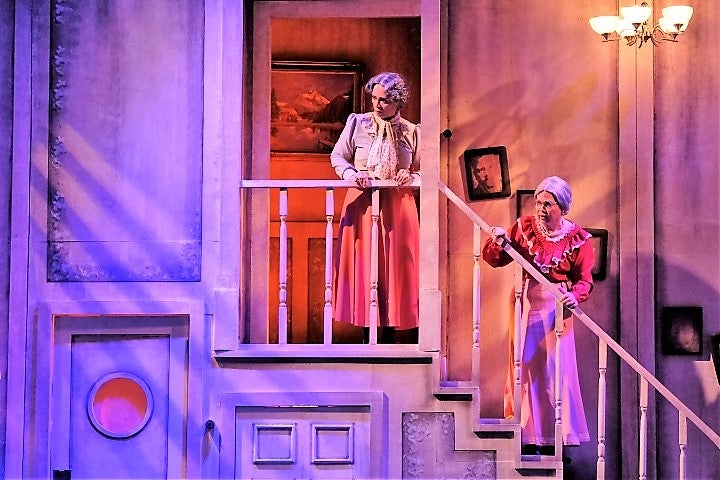 Chaos and entertainment in Rep’s ‘Arsenic and Old Lace’

It’s the third time Repertory Philippines has staged the classic dark comedy, “Arsenic and Old Lace.” But it appears that even such a familiar production is not without fresh shortcomings.

The show, penned by American playwright Joseph Kesselring and later adapted into a film starring Cary Grant, centers on the spinster duo of Abby (Joy Virata) and Martha (Jay Glorioso) Brewster. The sisters have turned their stately Brooklyn home into a welcoming refuge for lonely old men, offering the gents a special blend of elderberry wine as a surefire solution for melancholic maladies.

The ladies are unwittingly aided in their “altruistic” acts by their mentally challenged nephew, Teddy (Jeremy Domingo), who fancies himself as his more prominent namesake, Theodore Roosevelt. But when the Brewsters’ much-lucid other nephew Mortimer (Nelsito Gomez) discovers their peculiar brand of hospitality, chaos and entertainment erupt across the stage.

Virata and Gomez topbill the show as its twin stars. Virata adds to her eminent thespic career another first-rate performance, and it is easy for the unsuspecting audience to gravitate toward her seemingly innocuous, grandmotherly charms. Glorioso likewise injects her role with much bravura, but in a few parts, her acting falls short of Virata’s panache.

Gomez, on the other hand, shines with his depiction of the goody-two-shoes drama critic, Mortimer. He smoothly swings from a lovesick puppy besotted with fiancée Elaine (Barbara Jance) to a stalwartly loyal, albeit neurotic, family man, pulling out all the stops to keep his aunts’ skeletons literally hidden in the closet, nay, cellar.

The madness escalates with the arrival of yet another nephew, Jonathan (Apollo Abraham), a heinous criminal perpetually on the run with his heavily accented accomplice Dr. Einstein (Robbie Guevara). Abraham is sufficiently menacing as the felon boasting 12 bodies to his name, while Guevara—in a fine return to the Rep stage—similarly gives justice to Einstein. One wishes, however, that his role could have been stretched a little bit further.

There are instances where “Arsenic” feels unevenly paced and awkwardly executed, most especially in the scenes involving physical altercations. Denis Lagdameo’s set is adequate and functional, but borders on banality in its generic interpretation of the typical Western household.

Needing much improvement, too, is the show’s sound design. In particular, the voices of the two police officers (Dingdong Rosales and Luis Marcelo) in the second act are barely audible.

One redeeming factor is Bonsai Cielo’s magnificent costume design, which reflects the rolling years of the 1940s and sets the tone for much of the play. The harmless pink-red-and-white dresses of the Brewster women create an initial inviting atmosphere for their gullible guests, while their ebony-black frocks serve to showcase the mock nocturnal funerals they hold for their hapless victims.

And yet, with all its grisly themes and macabre humor, “Arsenic” is first and foremost a play about family: In the first act, Gomez willingly gives up a date night at the theater in order to protect his aunts’ secrets from the prying noses of the police. And toward the end, the Brewster sisters commit on a shared decision to follow Teddy to the sanitarium where they can live happily together. Sweet. —CONTRIBUTED