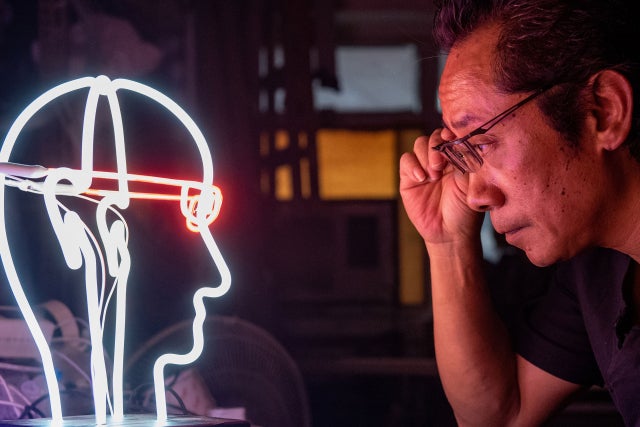 Neon sign maker Wu Chi-kai looks at one of his works during an interview with AFP in Hong Kong. Image: AFP/Philip Fong

Neon nostalgia in Hong Kong as lights go out

Neon sign maker Wu Chi-kai is one of the last remaining craftsmen of his kind in Hong Kong, a city where darkness never really falls thanks to the 24-hour glow of myriads of lights.

During his 30 years in the business, neon came to define the urban landscape, huge flashing signs protruding horizontally from the sides of buildings, advertising everything from restaurants to mahjong parlors.

But with the growing popularity of brighter LED lights, seen as easier to maintain and more environmentally friendly, and government orders to remove some vintage signs deemed dangerous, the demand for specialists like Wu has dimmed.

Despite a waning client-base, 50-year-old Wu continues in the trade, working with glass tubes dusted inside with fluorescent powder and containing various gases including neon or argon, as well as mercury, to create different colors.

He bends them into shape over a powerful gas burner at a scorching 1,000 degrees Celsius (1,800 degrees Fahrenheit).

“Being able to twist straight glass materials into the shape I want, and later to make it glow — it’s quite fun,” he told AFP, though it is not without risks.

Wu works without a safety visor and has been scalded and cut by glass that sometimes cracks and explodes.

“The painful experiences are the memorable ones,” he adds philosophically.

Believing the installation work too dangerous for his son, he instead encouraged Wu to learn to make the signs as a teenager. Wu became one of only around 30 masters of the craft in Hong Kong, even in neon’s heyday.

Although demand is now significantly lower than at neon’s peak in the 1980s, Wu says there has been revived interest and nostalgia for its gentler glow, immortalized in the atmospheric movies of award-winning Hong Kong director Wong Kar-wai.

Some of Wu’s clients are now requesting pieces for indoor decoration.

“I’ve been working with neon lights all my life. I can’t think of anything else I’d be better suited for,” he says. CC