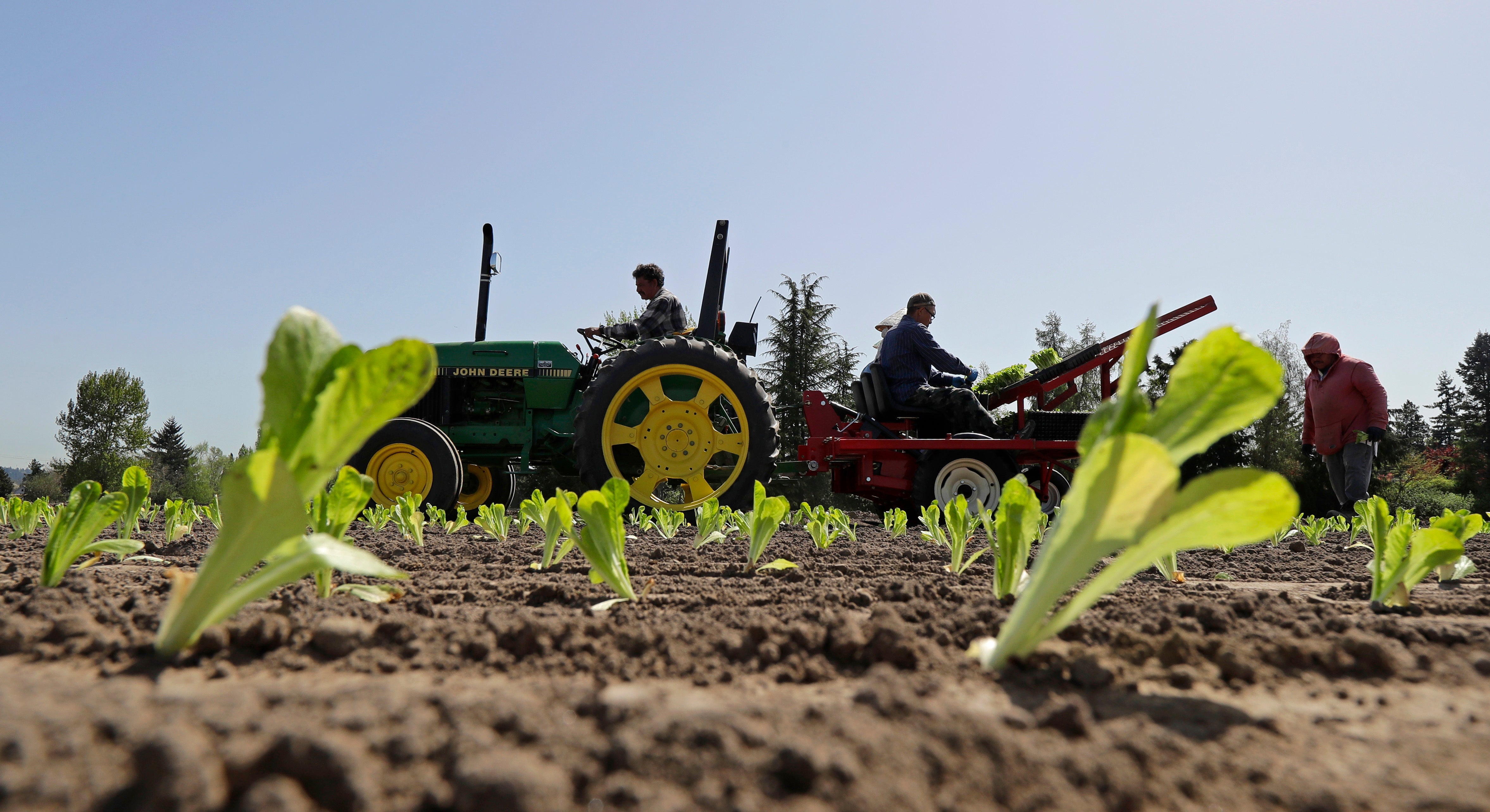 Workers plant romaine lettuce, Thursday, April 26, 2018, at the EG Richter Family Farm in Puyallup, Wash. The farm sells most of it's lettuce to large local grocery store chains, and owner Tim Richter says that so far his farm hasn't been affected by warnings that romaine lettuce from Yuma, Ariz., apparently has been contaminated with the E. coli bacteria. Richter says he urges consumers to stay away from bagged lettuce and to always cut and wash their own produce. Image: AP/Ted S. Warren

The government is still investigating how romaine lettuce from Yuma, Arizona, apparently became contaminated with E. coli bacteria. As of Friday, at least 98 people in 22 states have gotten sick, according to the U.S. Centers for Disease Control and Prevention.

Growers in Yuma typically plant romaine lettuce between September and January. During the peak of the harvest season, which runs from mid-November until the beginning of April, the Yuma region supplies most of the romaine sold in the U.S. The outbreak came as the harvest of romaine was already near its end.

At many restaurants around the country, romaine is still on the menu. Both family-run operations and big chains say they’ve checked with suppliers and are confident their romaine comes from places that aren’t affected by E. coli. If they’re not sure, they’re replacing romaine with iceberg and other lettuce varieties.

“We’ve got a lot of people asking where we get our lettuce from,” said Armando Ayala, the manager of Cavatore, an Italian restaurant in Houston. Cavatore offers three dinner salads — including a Caesar made tableside — with lettuce from California and local farms in Texas.

As it turns out, a lot of romaine comes from California, which grows 74 percent of the nation’s lettuce, according to the U.S. Department of Agriculture. Even Salad and Go, a chain with 12 restaurants in Arizona, gets its lettuce from California.

Just Salad, which has 28 locations in New York, New Jersey, Philadelphia and Chicago, says it saw a spike in business this week after a social media blitz to assure customers that its romaine comes from Salinas, California. Supply chain manager Janani Lee said Just Salad already carried five other types of lettuce, but it recently added iceberg for people who were still concerned.

Katie Calabrese and her friend, Amanda Larsen, both threw out romaine at home, but it didn’t stop their salad cravings. On Thursday, they were waiting in a long line at a Sweetgreen restaurant in Philadelphia.

The CDC first announced a multistate outbreak of E. coli on April 10. By the end of last week, it was advising customers, grocers and restaurants not to eat whole heads of romaine or salad mixes that might contain romaine unless they knew they weren’t grown in Yuma.

The government is still investigating this outbreak. But generally, E. coli is spread through human or animal feces, contaminated water or improper handling.

Salads UP, which has two restaurants in Ann Arbor, Michigan, and Madison, Wisconsin, says it didn’t have to get rid of much romaine, since it gets deliveries almost daily. For now, it has replaced romaine with iceberg, says Salads UP co-founder Robert Mayer.

“Customers don’t mind the temporary solution, and in general they appreciate that we are taking precautionary steps,” he said.

Burrito chain Chipotle also temporarily stopped serving romaine last weekend, but its California-sourced romaine was back on the menu by Monday.

McDonald’s, Wendy’s and Chick-fil-A say none of the romaine in their U.S. stores comes from Yuma. But Chick-fil-A says it’s making some salads with other lettuces or not offering them at all because of a shortage of romaine.

Frog Holler, a produce wholesaler that distributes to restaurants in Michigan, says all of its romaine comes from California. But many customers weren’t ordering it because of the scare. Iceberg orders increased slightly. Others would only take romaine with an official statement that it was safe, said Brittany Savela, an office assistant.

Then, for about a week, Frog Holler had to scramble when its own suppliers stopped shipping romaine.

“We just couldn’t get our hands on it anymore,” she said. But things are now returning to normal.

It could be difficult for farmers to make up for any shortfalls in romaine at this point in the season, since planting schedules have already been set.

On Thursday at the fifth-generation EG Richter Family Farm in Puyallup, Washington, workers were planting the first romaine crop of the season, which will be harvested around June 1. Tim Richter and his son Timothy grow romaine, red leaf, and green leaf lettuce along with other crops. They sell most of their lettuce to big grocery chains.

They hope the E. coli issue is cleared up soon and that people recognize the problem doesn’t affect all romaine lettuce. The Richters say they use conventional fertilizers — not manure — and irrigate with well water to help keep their crops safe.

“The biggest testament is that we eat it,” Timothy Richter said. CC