Back to Batanes—where there’s still no garbage on the roads | Lifestyle.INQ ❮ ❯ 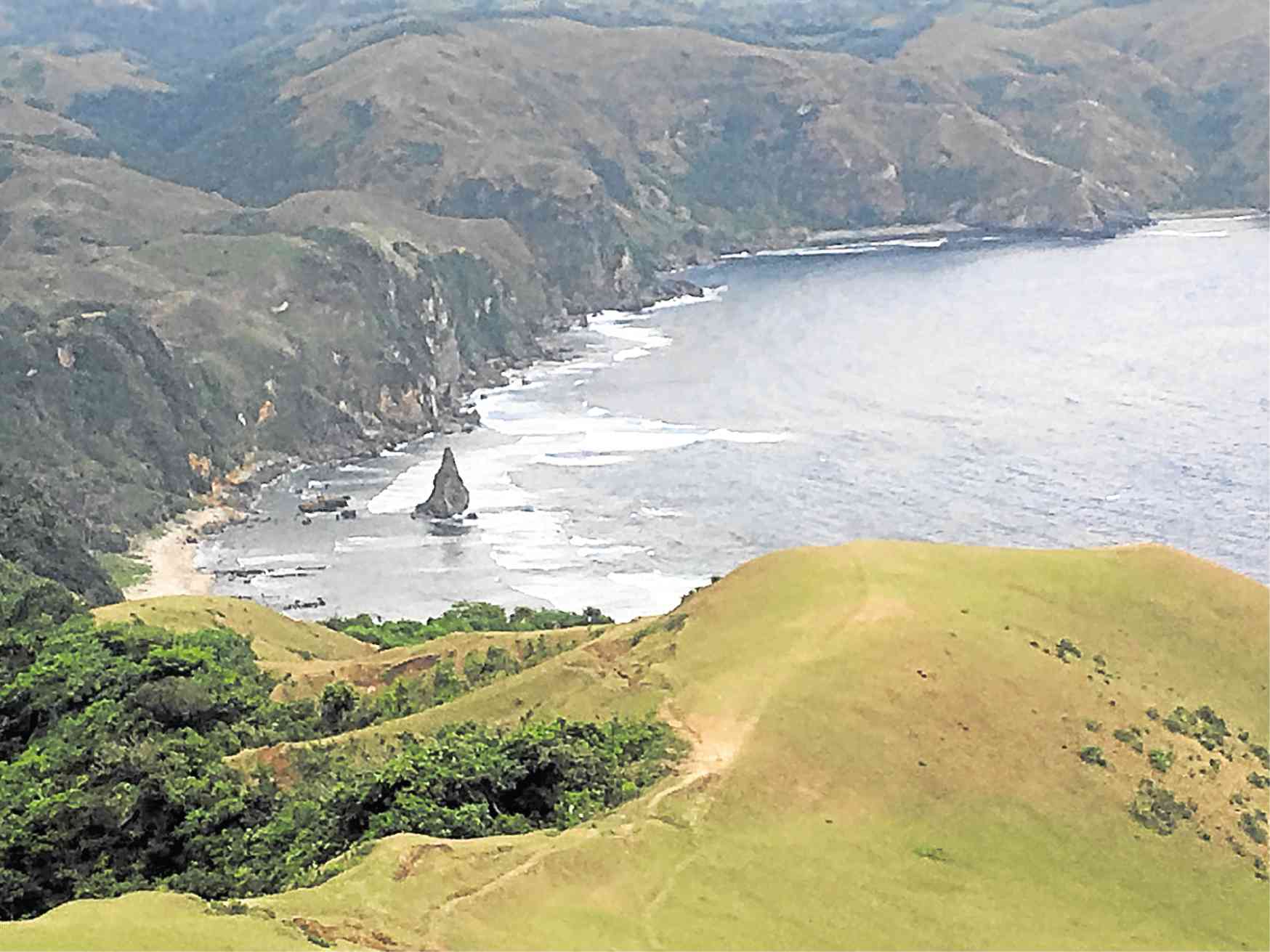 The view of Diura Beach from Marlboro Countrya—PHOTOS BYALYA B. HONASAN

In 1989, Batanes was a lot harder to visit. Flights got in only from Tuguegarao, Cagayan or Laoag in Ilocos Norte, and even then, you weren’t really sure you could get in—or out. For much of the year, the Philippines’ northernmost province was pretty inaccessible—they don’t call it the “Home of the Winds” for nothing—so people took advantage of a window.

I was a young journalist invited on an “expedition” to the islands by the Bureau of Domestic Tourism Promotion, then led by a dynamic young lady named Junjun Jorda, to explore Batanes for 10 days, along with a bunch of other journalists and photographers.

It was one of the most fun trips I have ever been on in my life, in no small part because of the fun company, but also because, well, Batanes was just unbelievable, and like nothing I had ever seen.

Being 25 years old and full of energy then, I must have hiked the entire island. With my backpack and lots of water, I took a quick walk up to nearby Naidi Hills, overlooking the capital of Basco on Batan Island. I climbed to Radar Tukon, the top of a hill less than 3 kilometers from Basco, an abandoned American weather station.

I set off to hit sunrise at incredible Valugan Bay. I still have three egg-sized pebbles
—blue-gray, light gray and almost purple—that I picked up as souvenirs (this was long before the idea of taking nothing but pictures, you see). I asked one fisherman on the shore where he got his basket backpack, called a pasiking, and he gave it to me. I have it to this day.

Then, like an over-enthusiastic tour director, I woke up the photographers in our group one sunrise and we trekked for three hours to Marlboro Country, so-called because it’s all green rolling hills and cows at pasture.

We got ourselves invited to a local wedding reception one evening, where we downed endless glasses of the local wine, palek, in exchange for a contribution to the bride and groom and obliging them with a quick dance. Nobody warned us that such drinking would go on all night. Good thing, the one and only lodge in town, Mama Lily’s, wasn’t too far away. I couldn’t remember how we managed to crawl home that night.

Last April, after 29 years and again in pursuit of a story, I found myself in Batanes once more. From the air, the greenery and the mighty Pacific Ocean still take one’s breath away. The flight is only over an hour now, straight from Clark, Pampanga, or Manila, with several flights coming in daily. The weather still rules, but the newer planes aren’t so afraid of it anymore.

One of the first things you do upon landing now is to register as a tourist, and pay an environmental fee. In exchange, you get a thin wad of coupons that you must show when you enter specific tourist areas. I wonder if this is just another bureaucratic formality, but I soon find out otherwise.

Time was when you could see the trail you needed to hike from wherever you were. Now, several buildings stand in the way, blocking my view, but not tall enough to cancel out the hills and clouds. I hitch a ride to my accommodations, a bed-and-breakfast called Rapitan di Vasay (rapitandivasay.com), with a lovely garden and airy, spotless rooms. It’s a warm welcome, as promised, and the breakfast is delightfully hearty—always with mountains of fresh sweet potato fries.

Although traffic is still nonexistent, vans now zip by with the names of different tour agencies on their sides, picking up predominantly Filipino tourists, usually with an English-speaking, knowledgeable guide taking the lead. It’s great to see Pinoys coming to see their own islands, but the choice of wardrobe leaves one puzzled: floppy hats, flowing chiffon blouses and long skirts—ready for the ultimate photo op, perhaps?—and that terribly irritating, ubiquitous selfie stick.

“That thing is dangerous,” agrees young artist Pio Abad, whom I’m here to interview for an upcoming Mabuhay Magazine feature, with his hometown, of course, as a spectacular backdrop. “Batanes has changed a lot, but it is still reliably stunning,” he told me in an e-mail leading up to the visit.

Today, the London-based artist, fresh from cocurating his late aunt Pacita Abad’s exhibition at the Museum of Contemporary Art and Design at the College of Saint Benilde (until July 1), turns to look at the hills he grew up running across, and sighs in contentment. “This never, ever gets old.”

Probably the most interesting addition to the place since I last came is the Abads’ Fundacion Pacita (fundacionpacita.ph), the studio of the late multimedia Ivatan artist, who passed away in 2004, after which it was turned into a gorgeous bed-and-breakfast. There’s a great café run by Pio’s sister Patsy, and a gallery for contemporary Ivatan art, Galerie du Tulaan. I’m immediately struck by the crazy floor of mismatched “machuca” tiles.

The day after our arrival, photographer RG Medestomas and I head off early for the port of Ivana to get on a packed falowa, the sturdy, oval-shaped Ivatan boat (a larger, motorized passenger version), for the 30-minute ride to Sabtang. At the Ivana port, DJ, the fellow selling tickets, asks nicely if we already have an island ride, and suggests getting us one; he books Jimmy, tricycle no. 32. (Call him at 09217630049).

Jimmy is at the Sabtang Port when we get there, although I am too busy ogling the view of the lighthouse to notice at once. He asks for a coupon, and registers us as tourists for the day. His tricycle has a modified roof and sides—not hot metal, but carved wood, like a canopy, that leaves the front open to the breeze.

Jimmy is from Savidug, one of Sabtang’s villages with old Ivatan houses, and he makes a quick dash home while we’re walking around and looking at, gasp, souvenirs—there are vakul (the famous women’s rain headgear), more pasiking and other baskets, T-shirts, even magnets at P20 each.

Jimmy takes us around for a half-day tour (P1,000), covering Chavayan, another village of old houses; gorgeous Morong Beach; and the breathtaking viewpoint at Chamantad. I manage clambering up well enough; it’s downhill that I have to negotiate more gingerly. Oh, and yes, we have to duck many of those accursed selfie sticks.

Back at Ivana, RG and I are already at Honesty Coffee Shop, looking for food, when I realize I’d forgotten to pay for the boat fare, and run back. DJ simply assumed that I already did!

What has changed, aside from my knees? Visitors are now encouraged to engage the local guides and tour companies, as tourism has become the backbone of the local economy. Just as well, because those chiffon-clad visitors will not survive any hikes. Still, you’re free to walk as much as you like. One tricycle driver said Valugan Beach would be “far” at 3 km away. I didn’t tell him that was once peanuts for me.

Valugan is still gorgeous (there goes another coupon), but the pebbles have become much bigger. More powerful typhoons must have carried them in. Marlboro Country is still deserted except for the cows, and Tukon is still the place for 360-degree scenery, although the radar was blown away by the last big howler in 2016.

Tricycles are now the workhorses of Batanes, virtual Ubers you can call to pick you up anytime, anywhere. There’s a laminated list of fares hanging in front of the passenger, so no haggling is necessary.

An iconic new Batanes symbol has also evolved: On each sharp, blind corner on the roads hugging the landscape, bright yellow signs remind drivers to “Blow UR Horn”—and they do. When Jimmy tells me he knows everybody, he isn’t kidding, because he honks and waves at everyone.

“Nobody worries about accidents here. We’re courteous on the road,” he says.

Where do the coupon earnings go? To keeping Batanes still incredibly clean. The roads have been cemented and lined with guard rails, the businesses are still mainly in houses (like the delicious pizza joint Casa Napoli, a converted garage), and there’s still no traffic, no malls, no fast-food joints.

There are trash cans most everywhere, labeled for recycling. Locals are keeping their backyards spotless. Maybe visitors just can’t bring themselves to sully all this jaw-dropping beauty. Or maybe the trash cans truly help.

Either way, there is no garbage by the roads, or on the beaches. Today, when plastic is threatening to drown us all, Batanes simply blows the mind.

Driving around Batan Island at sunset, exhausted after a wonderful day, I see a young woman sitting by the road overlooking the sea, beside a parked, probably rented motorcycle, earphones on, photographing Naidi Hills in the distance. She’s in shorts, with a backpack. She doesn’t look a day over 25.