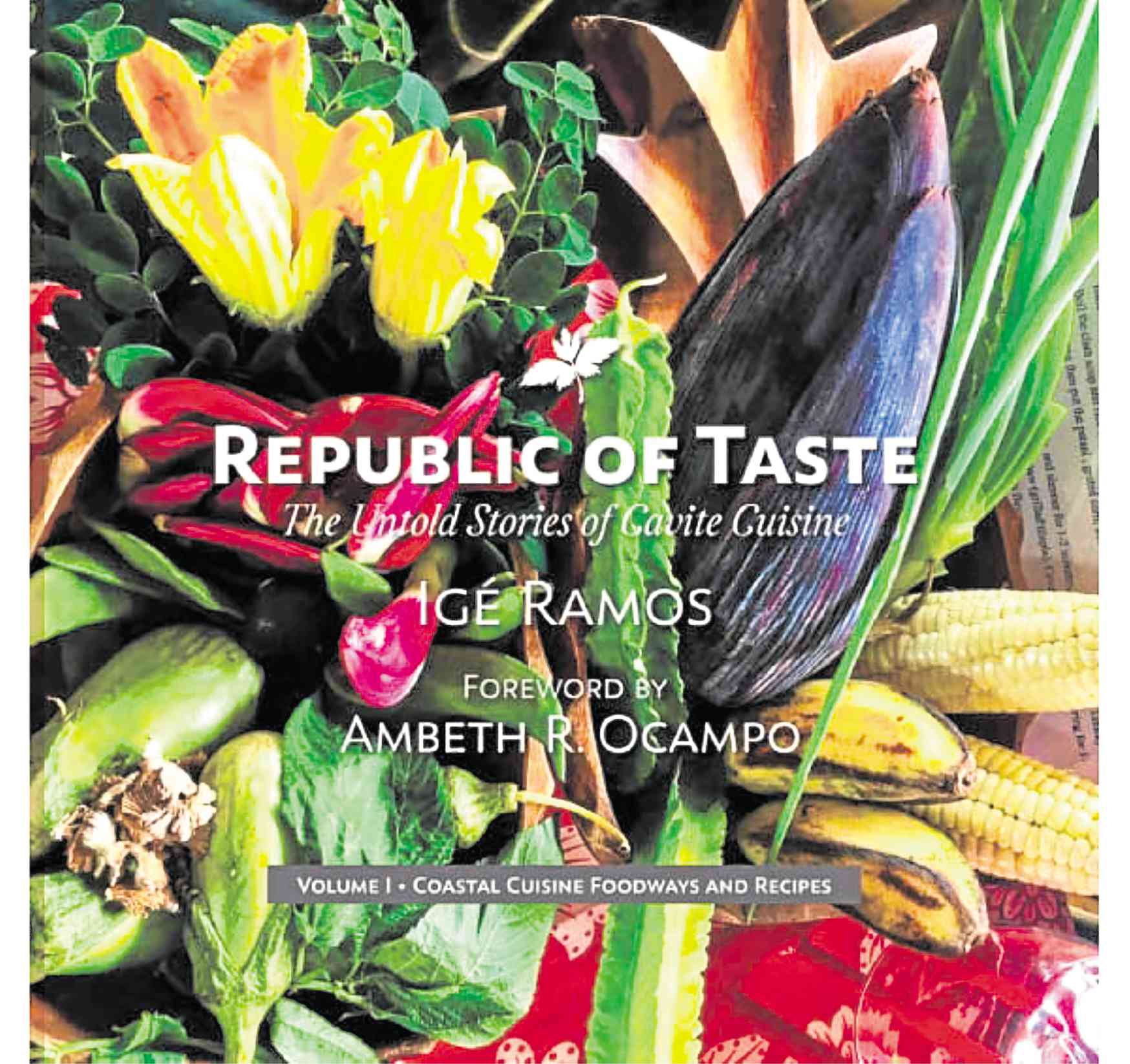 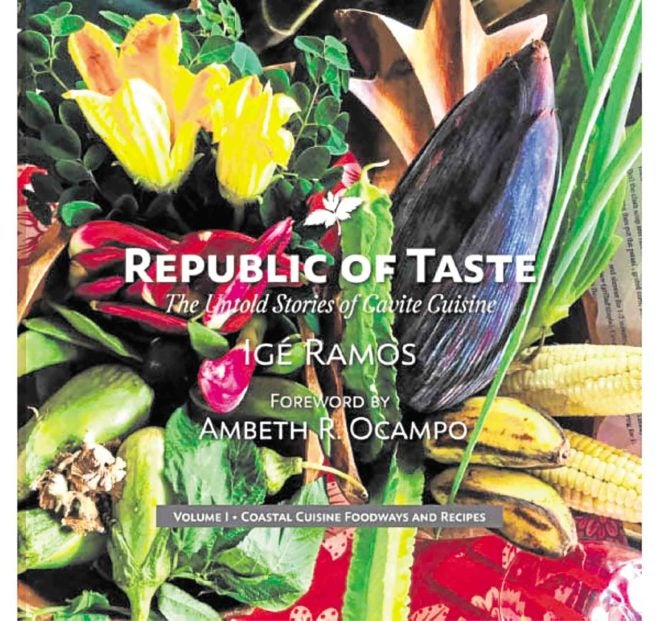 Ige Ramos had wanted to write about Cavite cuisine ever since he was a finalist in the 2004 Doreen Gamboa Fernandez (DGF) Food Writing Award. His essay was “Memory of Taste: The Chavacano Bacalao” and he wrote his name then as Guillermo G. Ramos.

Right after, he wrote for Food Magazine’s Food Tour about his province’s cooking, the market, the people who keep the cuisine alive. When he joined the DGF competition again in 2012, he won first place for his dessert piece, “Haleyang Sampaloc.” The essay is included in his book, “Republic of Taste: The Untold Stories of Cavite Cuisine” (Ige Ramos Design Studio, 2018).

In small letters on the cover is an equally small hint that this book is the first of a series of three. He starts with Cavite’s coastal cuisine and then will move on to the midland plains and the highlands.

The midlands include the town where my father’s family originated, Indang, before the family migrated north. It’s easy to guess that the highlands should include Tagaytay, Silang and Alfonso.

The book jumps from history to geography, to products, to specialties, to how the people eat. It is not a logical arrangement, almost like a conversation that jumps from one idea or subject to the next.

Of its geography, it is the Cavite port that is the most important site, figuring not only in the Galleon Trade during the Spanish times but in early trade with the Chinese and later by the Americans when the United States established its naval base at Sangley Point.
Hence, Mexico, Spain, China and the United States contributed ingredients, procedures and dishes that make up Cavite cooking today as well as terms used at the market and in the kitchen and most especially to the lingua franca of the province, Chavacano.

Ramos’s Cavite history includes the life of its most famous son, Emilio Aguinaldo, general of the Katipunan and first President of the country, a careful eater who liked root crops but butter as well and preferred the simple cooking of pinangat na isda, fish steamed with tamarind and tomato.

Ramos introduces two kinds of street food as he speculates that Aguinaldo must have eaten chinchao “black grass jelly, tapioca pearls and white grass noodles with ice and simple syrup,” and fresas, “shaved ice flavored with rosewater and strawberry syrup.”

My generation is familiar with the coastal face of Cavite and the images are of salt beds, oyster and mussel shops along the road and the beaches which were then less polluted. Those are hardly seen now and most of the beaches are no longer visited.

But what Ramos is thankful for is the rehabilitation of mangrove forests that will ensure that seafood still abound in the province, including oysters that will be clean.
The rehabilitation through the efforts of the Department of Environment and Natural Resources and the local government has an immediate positive effect, the return of the dampalit or sea purslane, a plant that grows at river and fishpond banks, pickled as side dish.

What remains, thankfully, are the specialties, some of which are the white cheese called quesillo, kakanin such as bibingkoy (akin to the moche), tamales and lihim ni Lola with its still secret ingredient inside a basic cassava cake, smoked fish such as the still famous tinapang Salinas, and the Digman halo-halo. How wonderful that there is a directory of Cavite Food Specialties at the back of the book.

How a people like to eat says much about the culinary culture of the people. Caviteños like to pair a dish with another dish. I’ve always wondered about kare-kare (oxtail with peanut sauce stew) and adobo (braised meat), which Nora Daza wrote about, and there it is in the chapter, “Terno-terno, tono-tono.” Other pairings include sinigang na bangus (milkfish sour soup) with ukoy (shrimp fritters), sinampalukang manok (chicken in tamarind broth) with lumpia fresco (fresh spring roll).

And then there is pairing with sauces and condiments which is called platitos de condimentos in Cavite. Aguinaldo’s pinangat can be made livelier with ground chicharon (pork crackling), patis (fermented krill sauce of which Cavite has so many kinds), burong mangga or labanos (pickled mango, radish), tomato with sprigs of unsoy (a different variety of coriander that looks like dill leaves).

There are recipes for the avid cook or someone who just likes to find out how the dishes are done.
My son who was Ramos’ apprentice when he was doing Sans Rival, the award-winning industry magazine, smiled when he saw pancit choco en su tinta (pancit pusit, noodles in squid ink), a dish he has been trying to perfect, and a different way to do fried rice, useful for his breakfast cooking duty.

For those, like myself, who have been to Cavite many times to research or just to eat, there are still new finds in the book. One of those is pipian, a chicken dish with a sauce of ground peanuts and squash. It has the same name as the chicken dish of Ilocos Sur but s also different. And how calandracas started as food served during wakes that morphed into a celebration dish at Christmas.

But I still have to taste the bacalao that Ramos wrote about in his essay, the one that started his culinary writing journey.