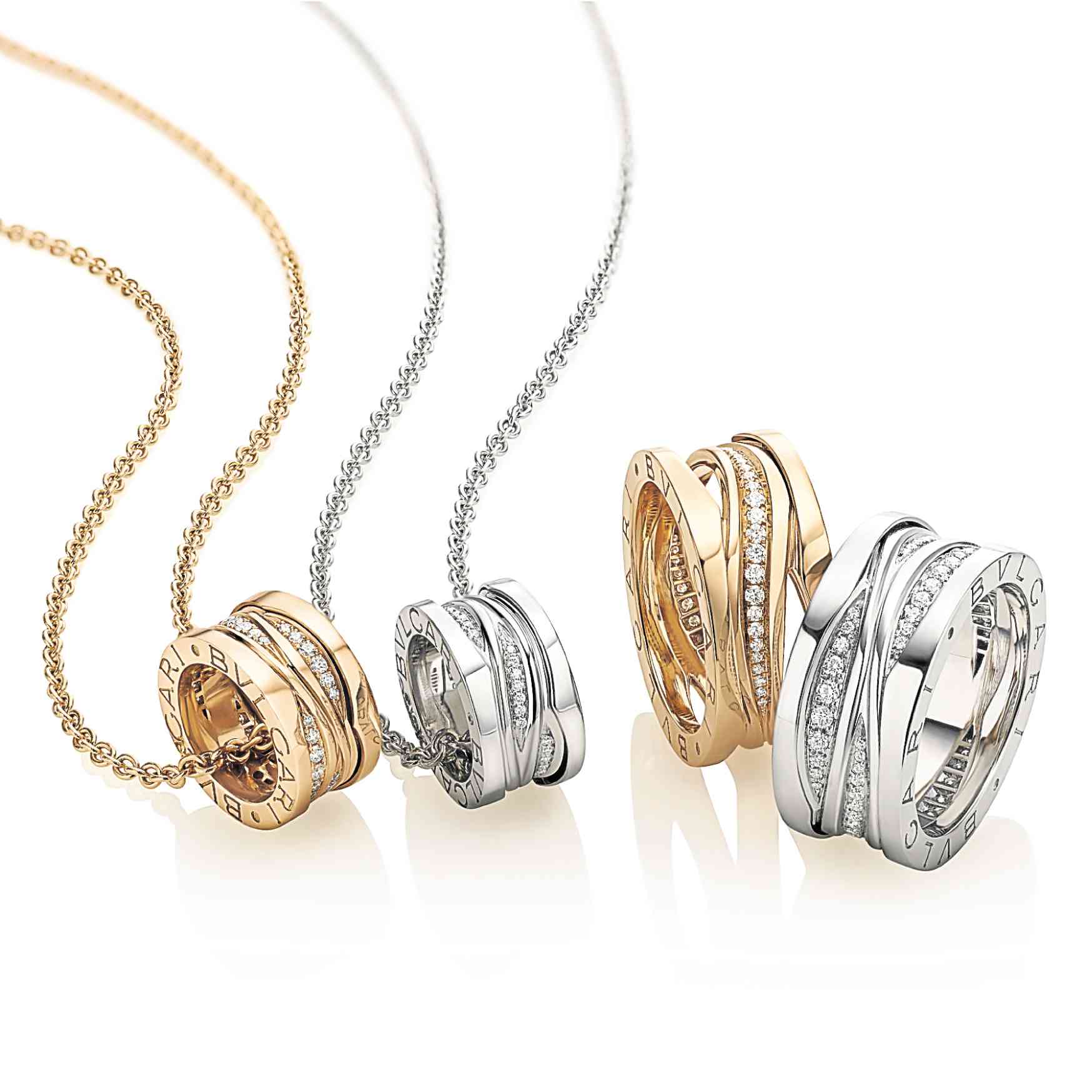 Necklaces and rings of white and rose gold with pavé diamonds, from the B.zero 1 Design Legend collection

Longtime clients of Bulgari familiar with the Italian jeweler’s elegant, decidedly sedate affairs must have been bewildered at the setup for the party launching the B.zero 1 Labyrinth collection a fortnight ago.

Guests entered Makati Shangri-La’s Sage Bar through a darkened corridor, lit by a series of keyhole-like arches with blue fluorescent lighting, typical of nightspots frequented by the young. At the end, behind a black curtain, was a DJ spinning pulsating dance music.

Later, on a dais at the right side of Sage’s sunken main room, the band Powerhouse played hits from the 1990s, as guests sipped on Champagne and cocktails and nibbled on Italian fare.

The vibe was reminiscent of a party hosted by the brand’s regional office in Singapore late last year, where actress and brand ambassador Alicia Vikander, 29, was seen dancing with Bulgari CEO Jean-Christophe Babin and other guests.

Hadid, 21, made news last year when she was named accessories brand ambassador of the historic luxury brand. Previously, Bulgari was frontlined by the likes of Julianne Moore and Carla Bruni-Sarkozy—women in their 40s and 50s. Like many of the luxury brands, Bulgari has been trying to woo the millennial market.

At the B.zero 1 Labyrinth launch here, the guest list was a mix of the usual suspects, the brand’s loyal clients, and a host of fresh, young faces.

“Yes, for sure, one of the directions of the brand is to attract and cater to the millennials, and the B.zero 1 collection is the perfect item to introduce to the market,” said Bulgari country manager Mario Katigbak.

“The venue, the vibe and the music catered to this younger market,” he added. “For the rest of the year we will be doing more digital advertising targeting the younger demographic, but not forgetting the more mature market for the higher-end lines. The direction will be two-pronged.”

B.zero 1 is a collection that was first introduced in 1999. Inspired by the architecture of the Roman Colosseum, it is characterized by two logo-engraved flat rings clasping a bolder central band—a bold and unusual design.

B.zero 1’s modern, iconic look would, through the years, take the form of watches and other pieces of jewelry. The brand has also collaborated with eminent designers and architects—Anish Kapoor, Zaha Hadid—to create B.zero 1 collections, called B.zero 1 Design Legend.

The new B.zero 1 Labyrinth is composed of rings, necklaces, bangles and bracelets, as well as earrings. There’s a four-band ring with the signature engraved outer rings—white gold on one side, rose gold on the other—and a spiral of bands at the center. Some iterations have pavé diamonds.

There are B.zero 1 pendants that are a swirl of white, rose and yellow golds. There’s also a delicate pair of earrings with the distinctive B.zero 1 bands hanging from a hoop.

Bulgari has expanded the B.zero 1 Design Legend created by Pritzker laureate Zaha Hadid (no relation to the model), who deconstructed the central bands into undulating spirals. They now come with pavé diamonds.

“The B.zero1 line has been evolving every year. We did the event just to introduce this line to the younger market,” Katigbak said. “The B.zero 1 has always been a leading contributor to our total sales,” he added, but it needed to be reintroduced to the millennials who may not be familiar with the collection.

Katigbak, who has built a loyal customer base for the brand, especially for its high jewelry collection, previously told Lifestyle that the millennial customer cannot be ignored, even by a brand that has long catered to a largely more mature (read: moneyed) market. The strategy, he said then, was to retain the mid- and high-end customers with collections intended just for them, but also to come up with fresh designs to attract a younger base.

Katigbak pointed out that the local luxury business continues to thrive owing to “younger local and foreign customers, plus the more mature market that is always on the lookout for something new in design and materials.

“There has been no change in the behavior of customers,” he added. “They still enjoy the service and the selection of the luxury brands. There is a symbiotic relationship that binds them to the brands.”

B.zero 1 is available  at Bulgari in Greenbelt 4, Rustan’s Shangri-La and The Shoppes at Solaire.