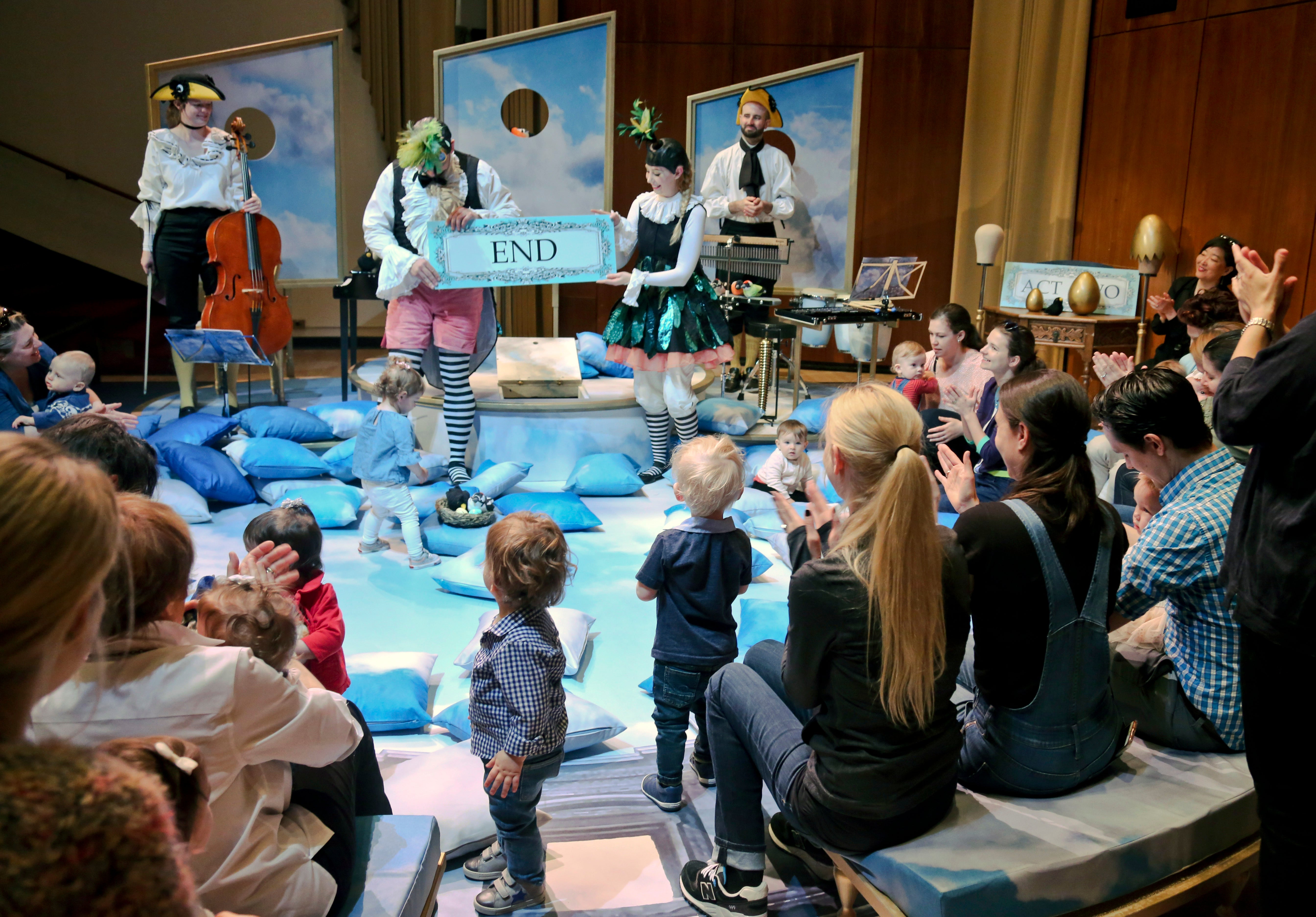 Parents and caregivers applaud in a small auditorium at the Metropolitan Opera House after a performance of "BambinO," a Scottish opera designed for an audience 6 to 18 months old, Tuesday May 1, 2018, in New York. Image:AP/ Bebeto Matthews

NEW YORK (AP) — Pacifier planted firmly in her mouth, Stella Starwalt sat at rapt attention throughout the performance. Alexander Werner, a more restless sort, roamed freely around the stage, picking up and discarding the fluffy blue-and-white pillows that served as props.

They were two of about 25 babies who gathered with their caregivers in a small auditorium inside the august Metropolitan Opera House on Tuesday to watch “BambinO”, an opera designed for an audience of children 6-to-18-months old.

The 40-minute-long piece was composed by Lliam Paterson on a commission from the Scottish Opera. He and director Phelim McDermott wanted to create something that would appeal to babies while also holding the interest of their adult companions.

“We worked on the sounds babies make and the sounds opera singers make and kind of moved from one end of the spectrum to another,” Paterson said. Added McDermott: “From bu-bu-bu to coloratura baroque, and transitioning between the two.”

Indeed, the score, played by a cellist and a percussionist and sung by a soprano and a baritone, alternates between soothing legato sounds and short bursts of exclamation. One duet is a deliberate imitation of a number from Mozart’s “The Magic Flute”. Paterson also created the libretto, made up of snatches of Italian dialogue, some of it lifted from operas ranging from Monterverdi’s “Orfeo” to Puccini’s “La Boheme”.

The rudimentary plot tells of a bird named Uccellina who finds a golden egg and buries it under a mound of pillows. Out pops another bird, Pulcino, who eventually learns to fly and soars off into the clouds.

The “stage” where this action unfolds is the brightly decorated floor of List Hall, normally used for chorus rehearsals and intermission features during Saturday radio broadcasts. There is space on the floor for the babies, or they can nestle in the laps of their caregivers, who sit on benches and chairs circling the stage.

The children in Tuesday’s audience showed remarkable interest in the proceedings, many of them interacting freely with the singers, who wear eye-popping frilly and feathery costumes (including feather dusters atop their heads).

These interactions are encouraged, but can pose challenges for the performers. “Basically we have to have 10 eyes and 12 ears at all times and do amazing acrobatics around them,” said baritone Timothy Connor, who plays Pulcino. “Phelim always tells us that after this we’ll be ready for anything.”

Alexander, 17 months old, was one of the more adventurous spectators, toddling between his mother, Kathleen, and those irresistible pillows. “He’s always moving. He loves to dance, and he’s already got a drum kit,” she said proudly.

But none was more attentive than Stella, 7 months old, who never took her eyes off the singers. Her mother, Sara Gergovich, didn’t seem surprised by this and said her daughter had developed a love for music before she was born, thanks to having it played for her an hour a day in the womb via BellyBuds speakers.

“BambinO” is a joint production of the Scottish Opera, Improbable theater company and Manchester International Festival, where the production premiered last summer.

Soprano Charlotte Hoather, who like Connor has been with the show since the beginning, said she never tires of it. “How can you not enjoy it?” she said. “They’re so full of life. Every show is different, it’s so fresh.”

The 10 performances in New York this week are free, but all spaces were quickly reserved as soon as the project was announced. The group’s visit was made possible by a gift from Judith-Ann Corrente, president and CEO of the Met board, who was in the audience Tuesday with one of her grandchildren. CC