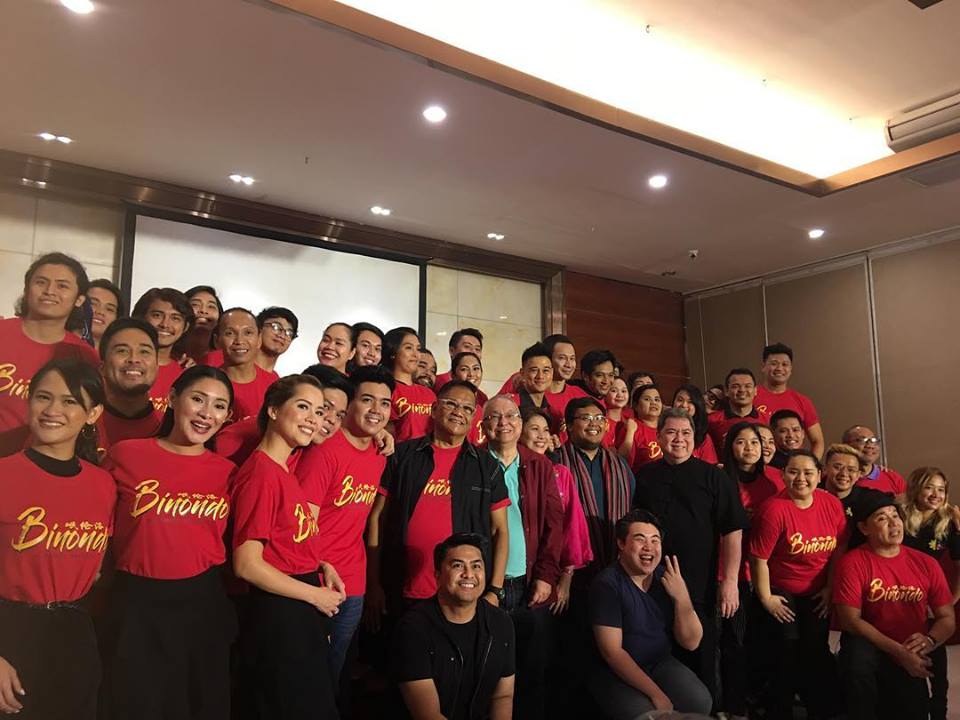 What could be the country’s first Tsinoy musical is set in the historic district of Binondo, with a Chinese scholar from Beijing falling in love with a Filipino night club singer during a precarious time—the Cultural Revolution in China.

“Binondo: A Tsinoy Musical” is based on a true story that producer Rebecca Chuaunsu said she heard firsthand when she met a Chinese professor in Beijing in 1986. “For the past 32 years, I’ve kept this story in my heart. I’ve etched this story in my memory, and after I saw ‘Maynila Sa Mga Kuko ng Liwanag, The Musical,’ I asked director Joel Lamangan if he was interested in doing a Tsinoy musical. He said yes, and things moved quickly. I ended up being one of the producers.”

The big task of writing the original music fell into the lap of Von de Guzman. The libretto is by eminent writer Ricky Lee, assisted by Gershom Chua and Eljay Deldoc.

Lee said writing a libretto is a tedious process, because he has to work with both the composer, the director and the singers in mind. “I had so many questions in my mind, but happily, I got the answers by just calling them (De Guzman and Lamangan) on a regular basis. I had many ideas, but since this is a big collaborative work, I feel better if they know what direction I felt I should take the story.”

The cast and ensemble were finalized through auditions, and the musical is set to open on June 29 at The Theatre at Solaire.

“Binondo, The Musical” is De Guzman’s second mainstream musical production after “Maynila.” He had written other musicals for school consumption, one of which was staged in New York University where he earned a master’s degree in musical theater writing. He also wrote an Italian opera that premiered in Citta Della Pieve, Italy, in 2016.

For “Binondo,” “What I came up with is predominantly dramatic Philippine pop but Broadway in style,” he said. “I had to work fast, because I was only given over two months to write the music.

“My creative process always involves a lot of research. I listen to and survey various forms of music. This is not limited to Chinese music and musical theater only. Film music is one of my major sources of inspiration and my work in the ‘Mano Po’ series helped a lot. A ready reference as I work is Puccini’s ‘Turandot.’ The major challenge is always how to define the characters through music. A composer defines the trajectory of the character’s development through songs and score. The nuances of the character are captured in the composer’s use of melody, harmony, timbre and texture—because a composer of musicals is first and foremost a storyteller.”

De Guzman said working with the librettist is an essential component in writing music for theater. “But the production process of every musical is unique. Sometimes there are delays in the ‘assembly line,’ which deny the librettist and composer the opportunity to work closely together. I always do some basic musical sketches of the characters in a musical as part of my writing process. This means that even before I write a song, I already have an idea as to how it would sound based on the personality of that character. This includes vocal range and quality.

“But I make sure to work closely with singers to check if they have concerns,” he added. “I also take into consideration the vocal abilities of the singer originating or performing the role in writing my melodies. I think that is vital in staging an original musical. After all, we are all creating something from nothing. The singers and I are basically inventing characters through songs. And that is the beauty of writing an original musical. It’s extremely exciting!”

The special challenge for director Lamangan is to focus on the love story between the Chinese scholar from China and the Filipino night club singer, and what the former has to sacrifice for his love.

His chief concern as director is how to make the story effective through the wholeness of the characters, the correctness of the structure and the appropriateness and beauty of the songs, together with the needed musical transitions.

“I also pay attention to the clarity of particular realities expressed through music and choreography. All things considered, I just want to tell a story in song and dance through the sheer magic of theater.”

“Binondo: A Tsinoy Musical,” with choreography by Douglas Nierras, stars Shiela Valderrama-Martinez and Carla Guevara-Laforteza in the role of Lily, the Filipino night club singer; Arman Ferrer and David Ezra alternating as Ah Tiong, the Chinese scholar; and Floyd Tena and Noel Rayos as Carlos, who will complete the love triumvirate. —CONTRIBUTED

The show will run for two weekends, June 29-July 8, at The Theatre at Solaire. Visit www.ticketworld.com.ph.