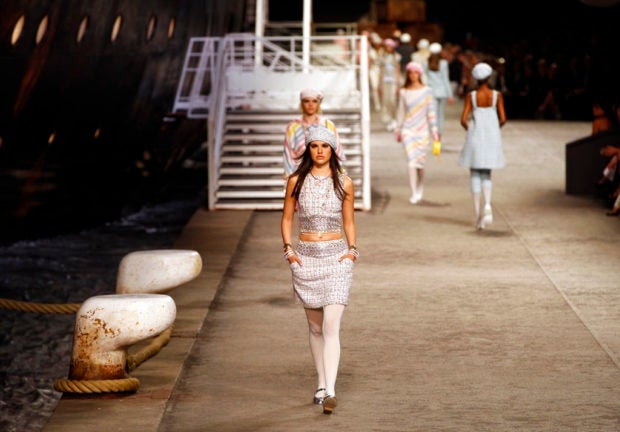 PARIS — Kristen Stewart, Ralph Fiennes and Margot Robbie all craned their necks up in awe.

A creaking, 330-foot (100-meter) cruise liner — with steaming funnels and gangplanks — was something Chanel’s celebrity guests never imagined they’d see moored on the dry land of the French capital, let alone inside the city’s Grand Palais.

It was the decor for Chanel’s annual Cruise collection Thursday night in Paris in which designer Karl Lagerfeld created a spectacle worthy of a James Cameron movie set.

The show saw the larger-than-life 84-year-old continue to defy expectations in fashion show spending — after earlier shows produced a recreated Eiffel Tower, a space rocket, a supermarket and a forest.

“The bar has been set very high … The set design in itself blew me away,” said Robbie.

“It’s amazing, but it doesn’t surprise me. This is Karl’s genius and imagination,” said model Lily-Rose Depp.

“Everything is just so realistic — down to the light that looks like water, and the smoke and the stars.”

The ship took two months to create with an exterior in plywood and a hull made of myriad steel. The gargantuan vessel — named “La Pausa” after house founder Coco Chanel’s Southern French villa — was brought to life by lighting mimicking lapping ocean waves and the sound of cawing seagulls.

The sea theme infused the clothes and was an apt choice for the mid-season show.

Cruise or “resort” shows — shown by only a handful of the world’s fashion houses — were originally conceived to target wealthy women who traveled on cruise ships in the winter. Nowadays, they’re used as a lucrative means of re-stimulating fashions in the mid-season lull.

Chanel’s show was all about the nautical stripe.

The motif was based on the razzle-dazzle designs painted on U.S. and British warships from World War I to camouflage them from German U-Boats. The stripes appeared down layered sleeves on two-piece skirts and in technicolor across white sporty dresses.

Styles from the Sixties also were a key element in the relaxed 87-piece collection. White berets met sexy exposed midriffs, miniskirts and loose white sweaters that were cut with a retro bateau collar. Mary Janes — one-strap shoes — were also given a cool reworking in silver and white, and some had rubber soles.

Robbie — whose star is rising since her recent Academy Award nomination for “I, Tonya” and who has recently been named a Chanel brand ambassador — used this trip to Paris to learn more about the Parisian couture house.

“First, I went to the archives and really got to understand the brand on a whole new level and understand really learn about Coco Chanel’s story, and how it influenced her designs,” she said.

Stewart came to the Paris show en route to this month’s Cannes Film Festival in southern France where she will serve as one of its jury members.

“Cannes is a place that values the reason why people make movies that aligns with the reason that I do,” said the 28-year-old “Twilight” star. “I feel like a little kid walking into something I’m not allowed.”

The ship, which conjured up images of the French Riviera, also bowled Stewart over.

“Their shows are always like walking into a very elaborate dream,” she said.

After the show, VIP guests filed through the gangplanks into the ship’s hull for the after-party and baptized the ship in Champagne until the wee hours Friday. MKH

Chanel goes girly with pretty-in-pink walk in the park