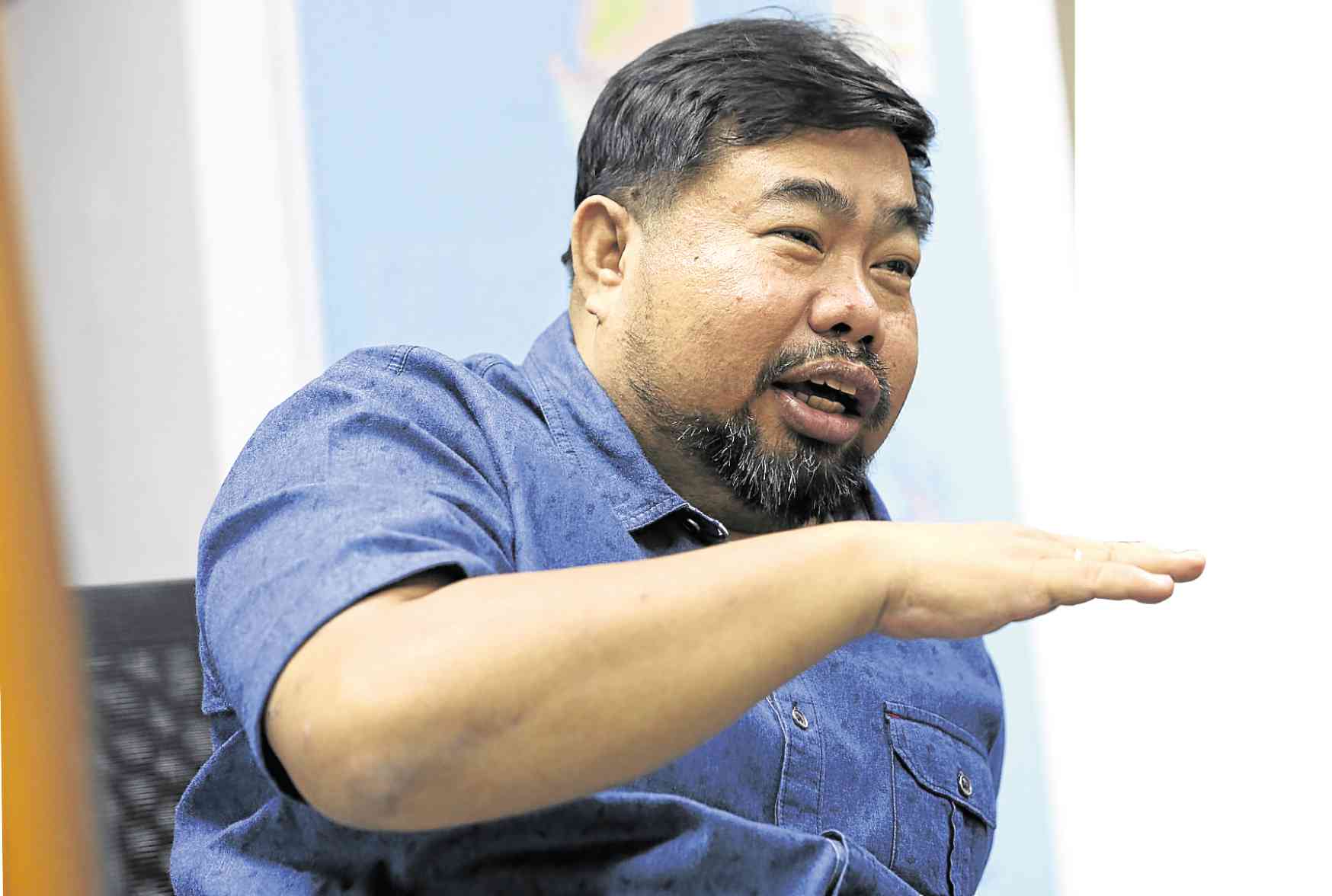 Manny Mogato during Inquirer interview: “Not all policemen are capable of doing it,” he says of the spate of extrajudicial killings. —JOAN BONDOC

Like most dyed-in-the-wool journalists, Manuel “Manny” Mogato gets very uncomfortable when he becomes the story.

“I wasn’t expecting it,” says the unassuming, 55-year-old reporter about winning the 2018 Pulitzer Prize for International Reporting, the first Filipino to receive it since Carlos P. Romulo 75 years ago.

Mogato shared the award with his Reuters News Agency colleagues Clare Baldwin and Andrew R.C. Marshall for “Duterte’s War,” an investigative report on the mounting body count in the government’s antidrug campaign, the result of an alleged unwritten policy sanctioning extrajudicial murder.

It was a team effort, he emphasizes. It wasn’t just the investigative team; other reporters in the Manila bureau pitched in.

The consensus among local journalists who have worked with Mogato, however, is that the story could not have been written without his deep understanding of the workings and culture of the Philippine police, and his contacts in the organization, the result of relationships built up over more than 30 years as a reporter.

It was one such source that broke the story wide open, he reveals. A retired police official pointed them in the right direction, he says, and told them who they should talk to. And they wouldn’t have said anything without the retired official’s green light.

“I was surprised that they spoke up,” says Mogato, speaking in Filipino.

Despite the popularity of the antidrug campaign in the polls, not everyone in the police organization is in favor of how it’s being handled, he suggests. There are some officers in the force who are against it.

Sources also told them about the “reward” system setting cash bounties for kills, a story which Reuters broke (and which the Philippine National Police has officially denied).

In 2016, in the early days of the drug war, some foreign press agencies reported that there were guns for hire being paid to do the killings, to the tune of P20,000 per kill.

“My police friends’ reaction was, ‘Why would we pay someone else when we can do it ourselves, and with less risk? And we get to keep the money,’” recalls Mogato.

This wasn’t exactly a surprise to the veteran reporter.

“I started covering the police beat in 1984, before Edsa in the dying years of the Marcos era, for People’s Journal,” he recalls.

The Sampaloc, Manila, native had just graduated from Pamantasan ng Lungsod ng Maynila with a Mass Communication degree, but his real education was just beginning.

“I was on night duty, and I became friendly with the police on the beat,” he says. “I would go out with them on operations. Sometimes they would hand me a gun and ask me if I wanted to join in.”

One time, he recalls, he was invited to a birthday party south of Manila by members of police intelligence. They were drinking outdoors, beside a creek. Mogato noticed two men who didn’t appear to be cops with them. It was a loud, boisterous party, but the two seemed quiet.

Close to midnight, some of the police left with the two men. About 30 minutes later, they called up to say there had been an “encounter.” When Mogato and other reporters arrived on the scene, there were two bodies on the ground.

“It was the two men who had been with us,” he says.

“The official line was they were armed holdup men. The encounter took place in a dead-end alley. They had no chance to escape. From then on I had my doubts about so-called ‘encounters.’

“Of course, this was during the Marcos years—you couldn’t speak up. And these were people you drank with, went on raids with, got your information from. It felt like betraying their trust if you brought it up.”

After the Edsa revolution in 1986, and the easing of restrictions on the press, this became a more difficult balancing act. With more press freedom came more emphasis on journalistic ethics, and reporters had to learn which lines not to cross.

“That’s the danger when you spend a lot of time on the beat,” says Mogato. “The police become almost like your barkada. The relationship between the reporter and the police is built on trust. They won’t give you their trust if you’re not ‘with them,’ and if you’re on the beat, it’s very hard to betray that trust.”

The job also comes with temptations, such as policemen on the take offering to share some of their loot with reporters.

“If you refuse to take payoffs, they will learn to respect that,” says Mogato.

“Over the years that develops into trust. The important thing in this job is cultivating your sources, because if you don’t have sources, you have nothing.”

With his easygoing, unpretentious manner, Mogato got along well with his police sources. With his chunky build, he even blended in, a kind of protective camouflage that allowed cops to feel comfortable enough to show him what law enforcement and its flipside, the underworld, were really all about.

When this writer was assigned to do a feature on prostitution, we asked for Mogato’s help. With his police contacts, he was able to get us inside the fabled domain of Doña Metring, one of Manila’s most notorious madams, for an exclusive interview.

In 1994, Mogato became a correspondent for the Japanese Asahi Shimbun. He joined the Manila Times in 1997, covering the police and then the defense beat.

After another stint with Asahi, he joined the Reuters News Agency in 2003, as a general assignment reporter, covering health, politics, government, and sports.

He doesn’t expect the Pulitzer award to change how he works, but his particular skill set does come in handy, especially since the drug war is a developing story that continues to unfold and change.

“Most of the killings happen in the National Capital Region, Region 3 and Region 4-A,” he says. “Rizal, Cavite, Laguna, Bulacan, Pampanga. The killings have been sustained only in these places. If you look at the records nationwide, there are very few in Ilocos, Cagayan, Zambales. In the Visayas, only in Cebu, and in Mindanao, only in a few places.

“Not all policemen are capable of doing it,” he says of the spate of extrajudicial killings.

After the Edsa revolution, Mogato covered the reign of the Alsa Masa anticommunist militia in Davao that some see as the precursor to the so-called Davao Death Squad, which, in turn, anticipates today’s extrajudicial killings, a pattern of violence stretching back more than 30 years and spreading from one place to another.

“In Marcos’ time, the killings happened in the countryside, not so much in the cities,” he notes. “Human rights violations also happened during Gloria Macapagal Arroyo’s term, but the ones being killed were lawyers, activists, suspected NPAs (New People’s Army) and journalists. This is different, the victims are ordinary people living in squatter areas. Walang kalaban-laban. I haven’t heard of any high value targets like Chinese drug lords being killed.”

Mogato thinks it’s too early to say if anything will change with the turnover in leadership in the PNP. There were 11 drug deaths in Bulacan on the day that Director General Oscar Albayalde took command, he notes.

Meanwhile, he adds, another disturbing pattern is emerging. Even as the growth in the number of “deaths under investigation” seems to be slowing down, the number of missing persons cases appears to be on the rise starting this year.

In the wake of international condemnation of Duterte’s drug war, and the initiation of an investigation by the International Criminal Court, Mogato suggests, the rising number of “disappearances” may be the start of a new phase in the deadly war on drugs.