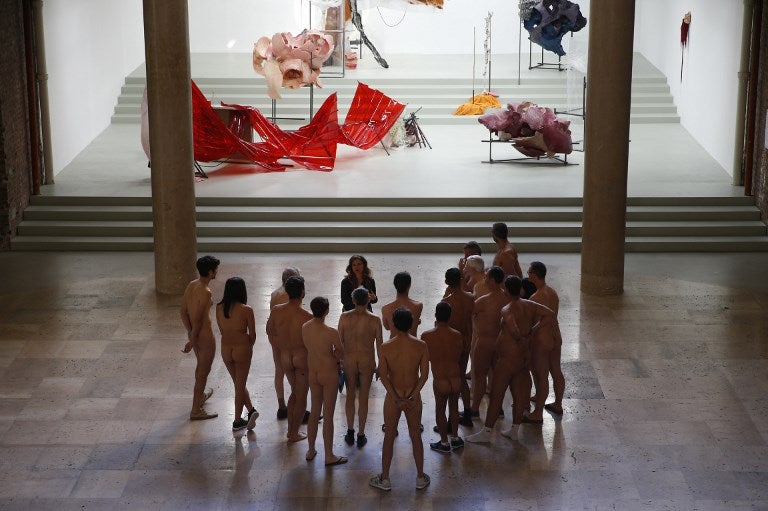 People take part in a nudist visit of the 'Discorde, Fille de la Nuit' season exhibition at the Palais de Tokyo museum in Paris on May 5, 2018. AFP

‘Day to remember’ for art-loving nudists in Paris

No shoes, no shirt, no problem: A Paris gallery gave nearly 200 people a rare chance for a clothes-free visit this weekend, the latest opportunity for the city’s flourishing nudist scene.

The Palais de Tokyo, a contemporary art museum in the shadow of the Eiffel Tower, offered the guided tour before opening to the general public on Saturday.

“What a day to remember. A new chapter in naturism is opening,” the Paris Naturists’ Association said on Twitter after the visit, which the museum called the first of its kind in France.

The participants, who snapped up the tickets in just two days after the event was announced in March, were able to take it all off for the show “Discordia, Daughter of the Night”.

They were then treated to a private cocktail party on the museum’s roof.

“An incredible moment, what a success! Mindsets are changing and naturism is becoming commonplace,” the nudists’ association said.

The French capital has become increasingly attentive to fans of baring their all, with the city last year setting aside a designated patch for nudists in the Bois de Vincennes Park to the east of the city.

They can also enjoy a meal at their own restaurant, named O’Naturel. /kga