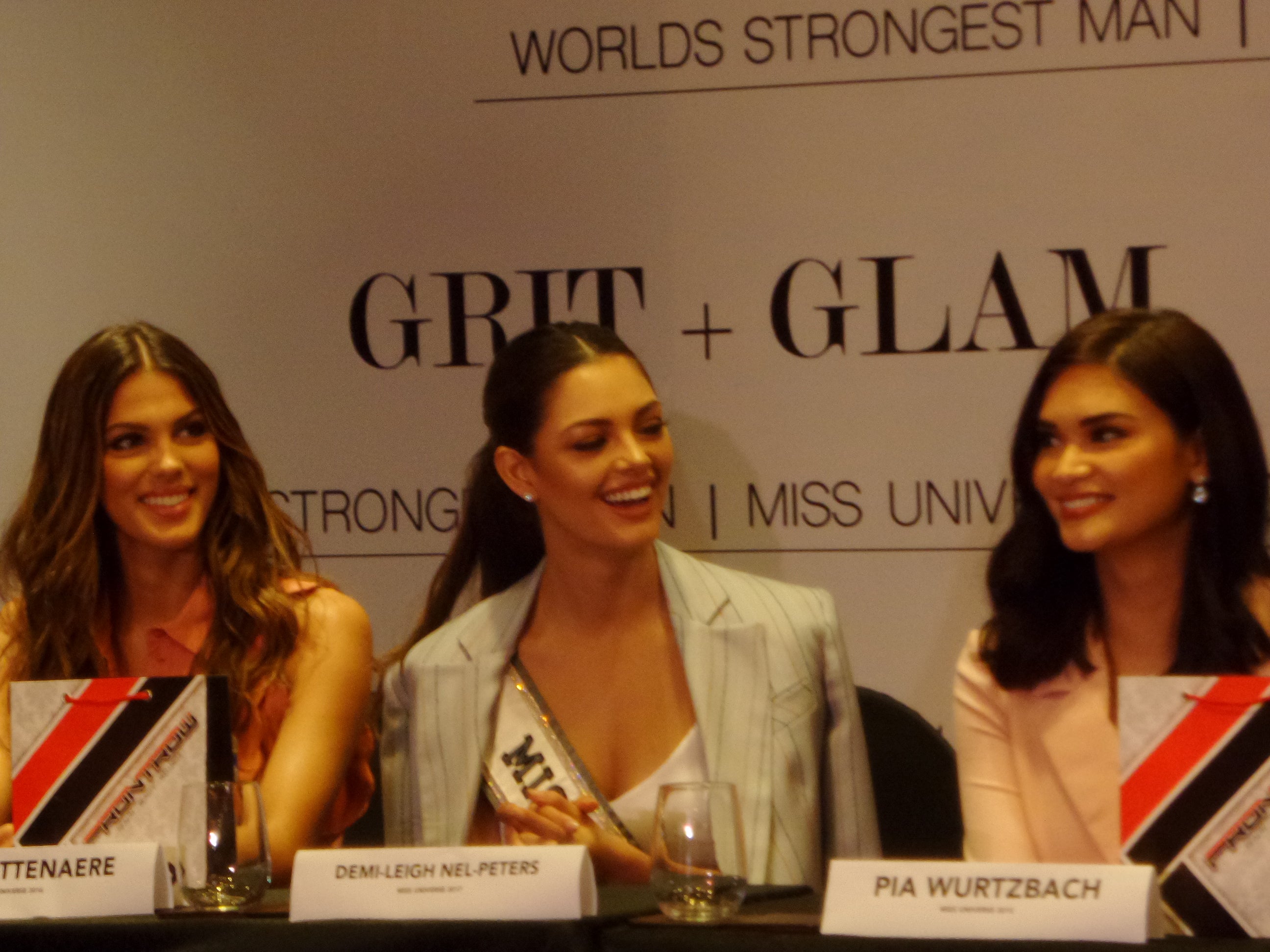 Beauty and brawn converged as reigning Miss Universe Demi-Leigh Nel-Peters and “Game of Thrones” actor Hafthor Bjornsson joined up for an evening of health, wellness, and beauty in Manila.

The South African beauty queen and the Icelandic professional athlete were among the headliners for the “Grit + Glam” fashion show slated on Tuesday, May 8, 2018, at the Cove Manila Club of Okada Manila in Parañaque City. The show would be hosted by Filipino company Frontrow.

Nel-Peters would sashay on the fashion runway together with former Miss Universe Iris Mittenaere of France and Pia Wurtzbach of the Philippines while Bjornsson would walk on the style stage with fellow “World’s Strongest Man” winners Matins Licis and Robert Oberst.

The six international celebrities faced the local media in a press conference organized by Frontrow at the Sofitel Philippine Plaza in Manila on Monday morning.

The Miss Universe pageant and the World’s Strongest Man contest were events mounted by the IMG/WME group based in New York.

The Philippines hosted the 2016 Miss Universe pageant in January 2017 while the recent edition of the World’s Strongest Man was held in the country for the first time last April.

Miss Universe Organization (MUO) President Paula Shugart said this is the first time that IMG combined two of its “properties.”

“It’s a total synergy,” Shugart said of the combination of the two entities.

Noting that it was a “no-brainer” to choose the Philippines to host the collaborative endeavor, the MUO official said: “We have a fantastic Miss Universe pageant from the Philippines, and we’d love to share it with the world with a property like the World’s Strongest Man that is seen around the world, to be able to promote the Philippines.”

“Thank you for taking good care of the World’s Strongest Man [participants] for the last couple of weeks. I think there is only one place with enough food that can feed everybody, and we’re thrilled!” she added.

Frontrow, a marketing company that produces beauty and wellness supplements and products, struck a partnership with MUO during the Miss Universe pageant in Las Vegas in 2017.

Its head, Raymond “RS” Francisco, spoke with Shugart and other executives to draw plans for the two companies, the first of which was the charity fashion gala held at the Solaire Resort and Casino in Paranaque City in December.

Frontrow COO Sam Verzosa told the Inquirer that after the success of their first endeavor with MUO, Shugart and her team offered the Grit + Glam event for possible hosting in the Philippines.

“It goes hand in hand – health, beauty, wellness. Frontrow is all about that. It’s a perfect combination,” he explained.

Verzosa also said the World’s Strongest Man winners have been offered endorsement contracts and will be later seen in promotional billboards and brochures, together with the Miss Universe titleholders.

Wurtzbach, Mittenaere, and Nel-Peters have already signed up with Frontrow in 2017.

“We’re building a long-term relationship with the [MUO] and we’re planning events. There is a lot to look forward to in the coming months,” Verzosa told the Inquirer at the sidelines of the press conference.

But the possible restaging of the Miss Universe pageant in the Philippines is out of the picture for now.

Shugart said the queens’ visit this month is exclusively for Grit + Glam, and Frontrow.

“We’re evaluating opportunities and possibilities for the Miss Universe this year. An announcement will be made soon,” she declared.

But MUO Vice President for Marketing, Shawn McLain, was overheard telling a Filipino attendee that no deal has been brokered as of the moment.

“If the Philippines wants to host the Miss Universe pageant again, they have to act fast,” he said.