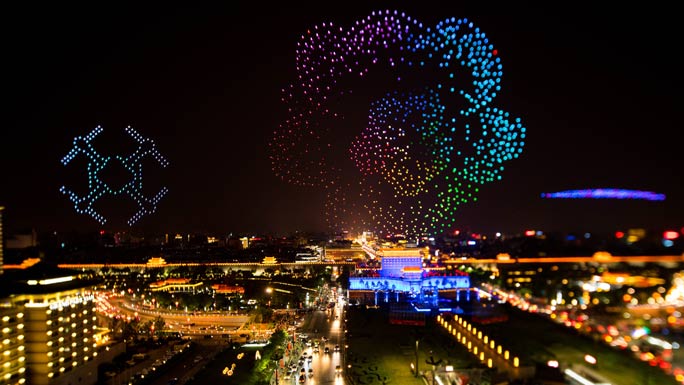 Residents of the Chinese city of Xi’an bore witness as over 1,300 aerial drones flew their way into the Guinness record books.

The drones were supplied by Chinese company Ehang Egret to the Xi’an government for a project to promote the city which is also the capital of China’s Shaanxi province, according to a statement by the Guinness World Records.

Exactly 1,374 Ehang Ghostdrones took flight on the night of April 29. The world record attempt was ahead of a planned presentation for China’s Labor Day celebrations on May 1. The theme was “Beijing 8 Minutes” and the show planned in the closing ceremony of the 2018 Pyeongchang Winter Olympic.

The team behind the show received the record title “Most unmanned aerial vehicles (UAVs) airborne simultaneously.”

Equipped with programmable lights, the drones lit up the night sky like stationary fireworks. While in the air, the drones shifted through various formations. These includes the Silk Road, the Dayan Tower, and Xi’an City Wall to name a few.

The previous record was 1,218 drones in the air which took flight last December 2017.

It’s also worth noting that Ehang is the same company who built the Ehang184 autonomous aerial vehicle. A kind of oversized drone which can ferry two people to specific destinations in an urban environment without the need for a pilot’s license.

Autonomous passenger drones to take off in Dubai by July