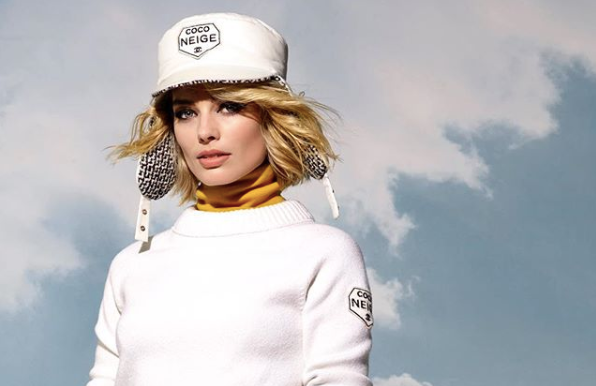 Australian actress Margot Robbie, who was appointed as Chanel’s latest ambassador in March, has undertaken her first advertising campaign for the brand. The star of the movie “I, Tonya” is fronting a campaign for Chanel’s Coco Neige collection designed by Karl Lagerfeld.

At the end of March, Chanel announced the launch of two new collections, Coco Beach and Coco Neige, which will be added to its ready-to-wear, haute couture and cruise collections. Just over a month later, the iconic French brand has given us a sneak peek at the ad campaign for its new winter sports and après-ski collection starring Robbie.

A first photo of the campaign has been revealed on Chanel’s Instagram account. The A-list actress is standing against a backdrop of blue sky and white clouds, wearing a chunky sweater, a rollneck and a white trapper hat decorated with the words Coco Neige.

Designed by Karl Lagerfeld, this new line will be available in the French brand’s stores from July.

Margot Robbie has starred in films such as “The Wolf of Wall Street,” “Tarzan,” and “I, Tonya,” for which she was nominated for an Oscar. NVG