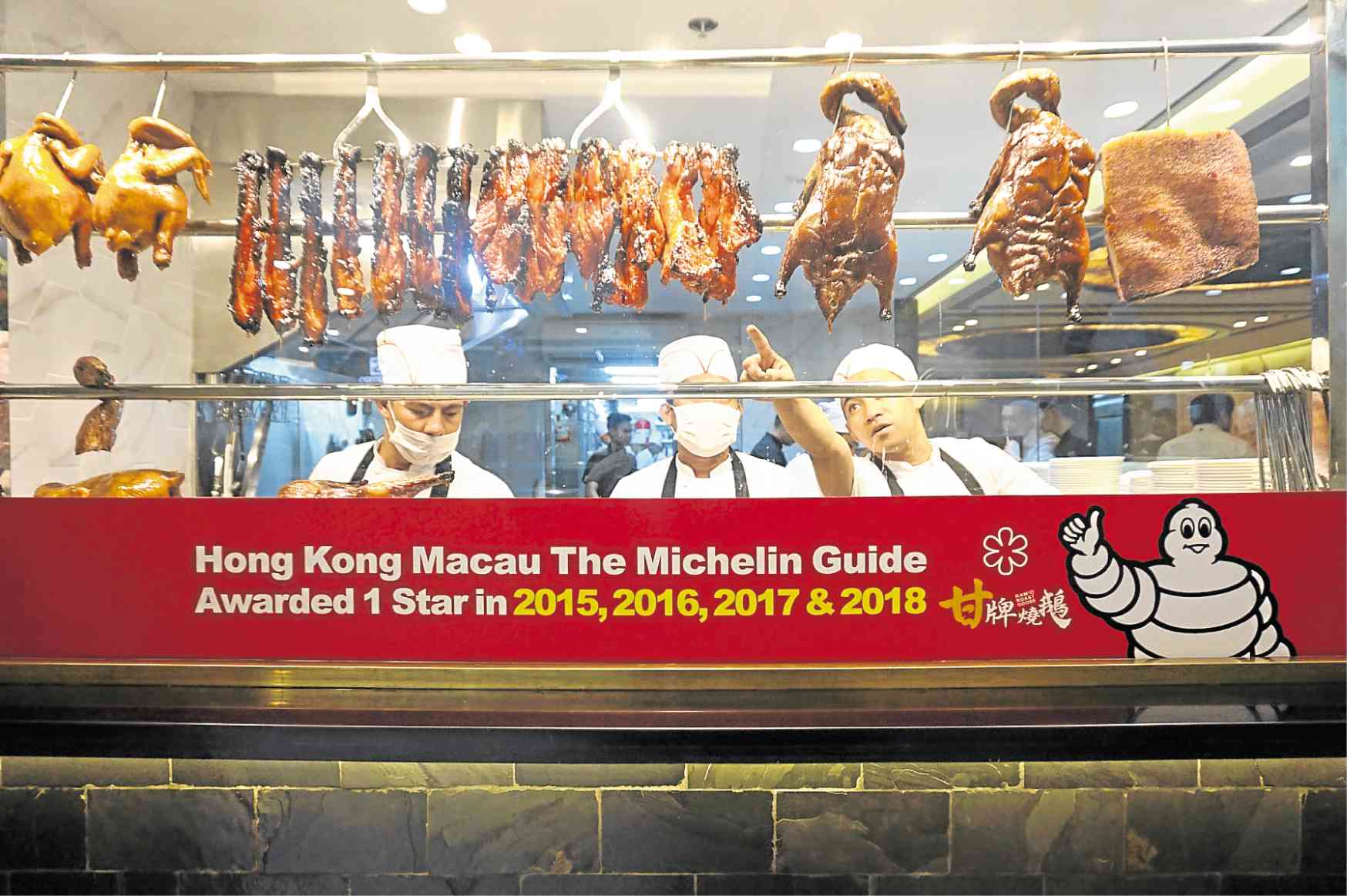 The Michelin-star restaurant opens May 15 at SM Megamall. —PHOTOS by IRENE PEREZ

Kam’s Roast, the Michelin-star restaurant from Hong Kong, will open in Manila on May 15 to make true the Filipino diner’s roasted meat dreams.

At Wan Chai district in Hong Kong, it’s usual to see people lining up to eat at Kam’s Roast Goose, the humble restaurant which earned a consistent following for its succulent goose. Aside from snagging a Michelin star, the goose is said to be so good that American chef Anthony Bourdain dropped by while he was in Hong Kong.

Created in 1942, the winning recipe has been handed down to families by the patriarch Kam Shui Fai. At present, his grandson Hardy Kam oversees the operations of the original Cantonese restaurant in Hong Kong, and the expansion branches in Singapore, and now Manila, which are simply called Kam’s Roast.

The “Goose” was dropped because the fowl cannot be imported from China for safety reasons. The solution is to use bigger duck instead of goose, and to slow cook the meat for two days using the same traditional technique.

Super got to dine at Kam’s Roast at Mega Fashion Hall before the official opening, and it was a meat fest.

An enticing glass panel showcasing a hanging parade of whole duck and golden chicken, strips of barbecued pork belly, and a seductive slab of crispy fried pork greeted us before entering the restaurant—which is the fanciest Kam’s to date. It’s the difference between coach and first class: same flight, but the other has more space and better seats.

After a starter of marinated cucumber and sliced tofu, we finally got dibs on the much anticipated meat dishes.

Kam’s signature roast duck was nice and fatty, with tender meat and semi-salty skin. The duck was sourced from Davao; it’s good, but the yummy soya chicken got wiped out faster.

Diners can pair the roasts with plain rice or thin braised noodles topped with shrimp roe. Warm pork-and-shrimp wonton soup was served on the side, along with a plate of token-veggie poached bokchoy.

The local Kam’s Roast menu is short but very meaty, and would include rice toppings sold at a starting price of P200, Eric Dee said. He is the COO of Foodee Global Concepts, the company that brought the roast brand to Manila (plus Tim Ho Wan from Hong Kong, Tsuta Japanese Soba Noodle from Tokyo).

“Paying for the price of the roasts in Singapore and Hong Kong would be an everyday thing. In Manila, such pricing would be on the premium side, so people would expect more elegance and better service.”

(We noticed that Kam’s Manila serves food on proper dinnerware, while the HK restaurant makes use of plastic.)