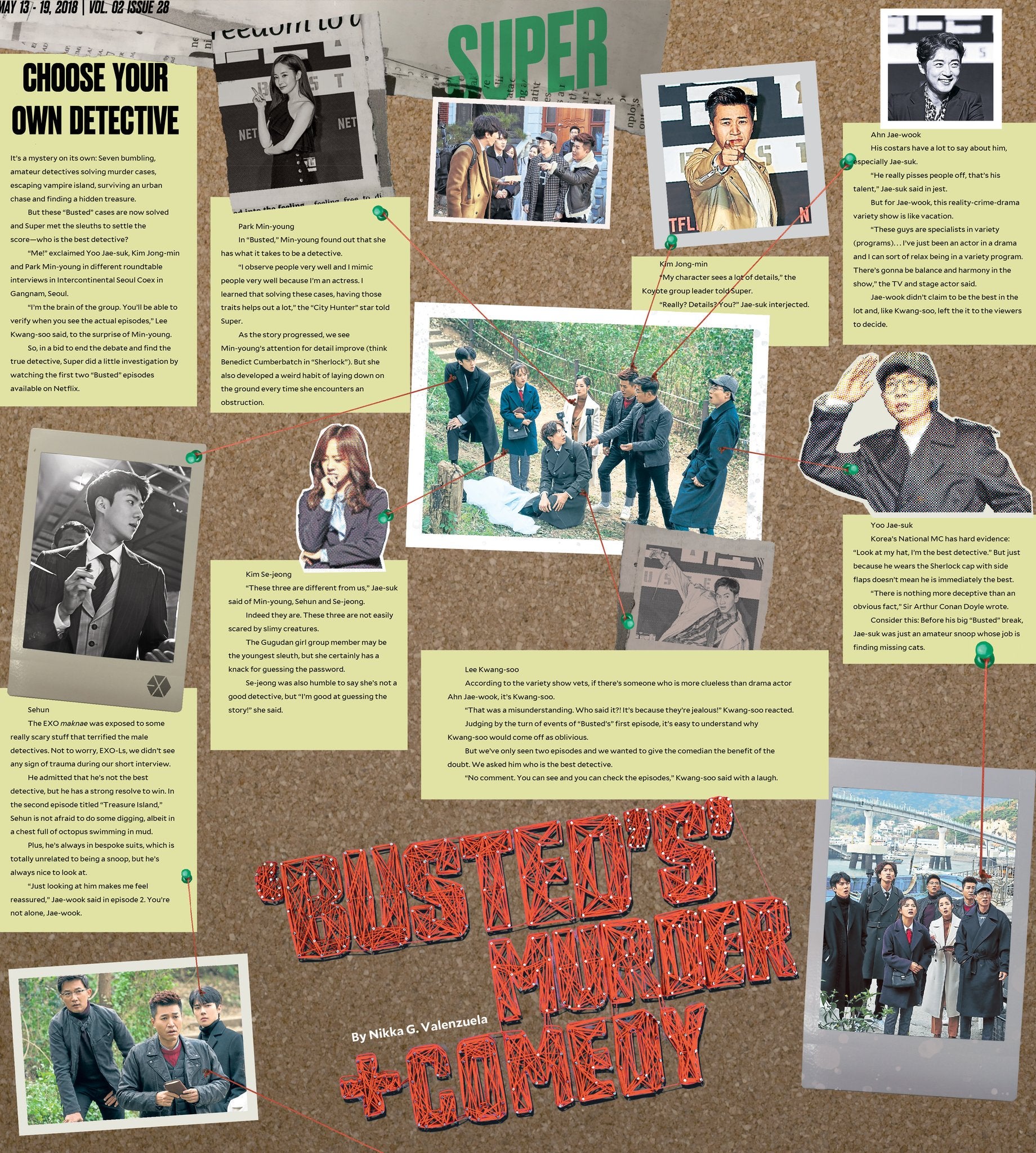 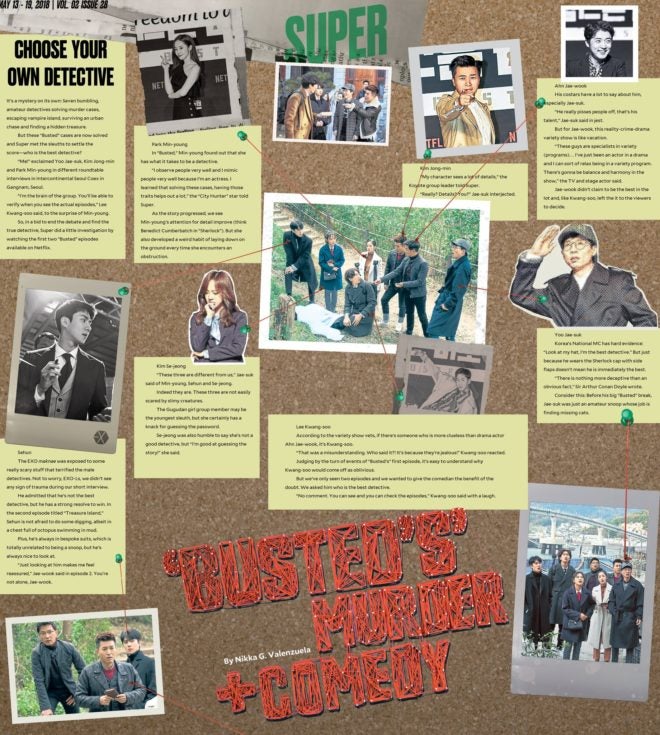 SEOUL—Someone has been murdered and the culprit is at large. But fret not; seven of the best—or worst—detectives are here to crack the case.

Amateur sleuth Yoo Jae-suk leads a team of bumbling detectives brought by a mysterious host named K for a murder game party. It was supposed to be all fun and games, until someone was actually murdered in cold blood.

The 10-episode reality crime drama is Netflix’s first Korean variety show. “Busted’s” premise is deceptively simple: Find the murderer and solve the mystery, but viewers soon learn the show is anything but that.

“Busted” is like a massive breakout room and in each episode, the cast members must complete tasks—unlock doors by solving math problems, overcome obstacles, even pole dance their way to gather information—to find the murderer.

The show was taped in hallyu central Seoul, industrial Incheon, bustling Gyeonggi province and scenic Jeju Island. Colossal sets were built for the escape rooms, which included giant chess pieces, rotating poles, and that’s only the first episode. (The warehouse filled with booby-traps reminded us of the challenges Harry, Ron and Hermione faced in their quest to find the Sorcerer’s Stone.)

Some 300 staff members were involved in this grand production and over 100 cameras were used, the most number in a large-scale variety program, according to producer Kim Joo-hyung. He’s also behind the popular K-variety show “Running Man” hosted by Jae-suk.

Producer Cho Hyo-jin added: “The ‘Running Man’ production team got back together. We wanted to create a virtual-reality situation and have people react to it.”

Writer Park Hyun-sook is the Sir Arthur Conan Doyle of “Busted.” He created the show’s mind-bending mysteries, except for the script. The detectives are on their own, whether they display Holmesian brilliance or Columbo’s clumsiness is entirely up to them.

“We don’t give the guidelines, they (detectives) figure it out themselves,” Hyo-jin said during the press conference in Intercontinental Seoul Coex in Gangnam.

This genre is called situated variety show and it’s a huge trend in South Korea. However, variety show vet Jae-suk said he’s not joining the bandwagon on the new take of variety shows.

“There should be more variety in variety shows,” the No. 1 Korean entertainer said.

But without a script to follow, how do we know we’ll get a good laugh out of “Busted?”

The producers assembled an all-star cast—veteran comedians (Kwang-soo, Jae-suk, Jong-min), K-drama royalties (Min-young, Jae-wook) and K-pop idols (Sehun of EXO and Se-jeong of Gugudan). They are not exactly Sherlock Holmes (or even Watson), but they have skill sets (read: average) period.

“At first I was very nervous because it was (unscripted) and I kept on asking because we don’t have a script or we don’t know what we’re doing or what’s next. I kept on asking questions but everyone said ‘You’ll know when you get there,’” Min-young told Super.

When she did get there, in an escape room set, she was able to immerse herself in the situation and felt at ease taping without a script.

“It’s a detective series and you’re trying to solve a mystery, that’s why it just worked without a script. You can go in multiple ways. There is that risk factor where you can go into a pitfall where it’s completely no clue and no solution, but I guess it provides the fun factor for it,” funnyman Kwang-soo added.

We see the superstars in their most candid moments like Kwang-soo being clueless most of the time and Jong-min being, well, Jong-min.

“There is no format. I have no idea what I’m doing here! I don’t even know if I’m doing well,” Jong-min said.

Se-jeong, the youngest of the lot, harnessed her full Powerpuff Girl powers and brought in sugar, spice and everything nice in this reality-crime-drama-variety show.

“Mystery is always focused on the case, but they are all looking at us (cast members) who are solving the mystery. I try to be as cute as possible,” the 22-year-old idol said.

And then there are revelations: TV goddess Min-young is not afraid to go down her pedestal and get her hands dirty, literally, when she washed filthy cars to find a tiny but crucial clue.

“This is my first trial in variety show. I never had the chance to show who I am as a person,” Min-young said. “I told my friends don’t be disappointed. I don’t look absolutely pretty as a person.”

Meanwhile, in a headache-inducing chamber, Jae-suk emerged the math whiz who got the crew out of the “Math room.” The detectives were locked inside a room with several doors, and behind those doors were numbers to an (intimidating and not even correctly arranged) equation they must solve.

A total of 56 celebrity guests joined the “Busted” crew in this mad show, but the names are revealed as the show progresses.

The producers said the cast’s synergy and chemistry brought the laughs.

Super met the “Busted” stars for a series of roundtable interviews and, to summarize our encounter in two words: chemical combustion.

“I know you didn’t ask, but the only person who shouldn’t be a detective is him. He doesn’t have the skill set for it,” Jae-suk joked of his costar Jae-wook.

This bunch was warm and naturally funny, and they didn’t need scripts to be so.

Sehun and Se-jeong flashed us their cutest smiles. (Do they use their charm to extract information from suspects? We need answers!)

Kwang-soo and Min-young didn’t hold back. The “Running Man” mainstay is seen in “Busted” wearing an Inspector Gadget ensemble, plus a huge backpack. We couldn’t help but ask: What’s in the box?

“He had everything in it!” Min-young said.

Kwang-soo laughed and said two GoPro cameras on a monopod were sticking out of his backpack to provide a different perspective in the show, mostly of him running.

“It’s very heavy actually because inside you have a magnifying glass, you have cameras and tools you need in order to solve the mystery,” Kwang-soo added.

And then we asked the burning question: Who is the best detective? There was no consensus. But most of the cast members agreed who are no gumshoe: Jae-wook and Kwang-soo.

“Busted” is now streaming on Netflix, with two new episodes every Friday.