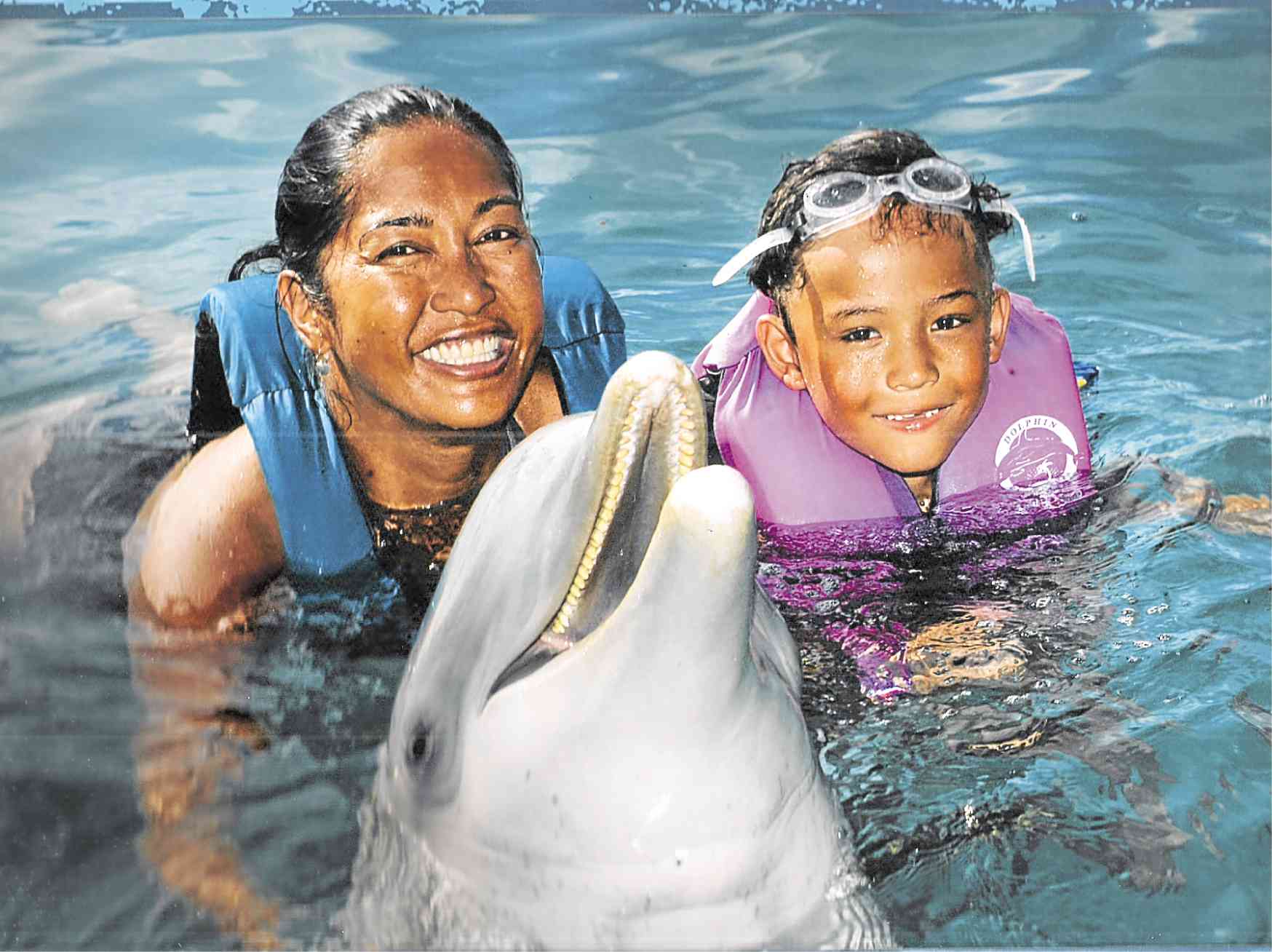 Mother and son on vacation many years ago

Deadline time Monday night, I got a call from a New York number. I somehow instantly knew it was Anna Bayle.

She said she was visiting the Philippines next week, from New York, where she has lived since her supermodel days in the ’80s, and she’ll be with her son, Callum.

What was meant to be a brief call stretched to about an hour, with her talking about motherhood, and not at all about fashion.

Anna has left fashion, where she once reigned on the runways of Paris, New York, Milan, Rome, Tokyo in the ’80s and the ’90s as the forerunner of the supermodel, modeling for leading fashion houses, and  as the signature model of Yves Saint Laurent—a unique feat for a Filipina.

The last time we spoke on the phone was a few months ago, right after designer Azzedine Alaïa died and I asked if she could write about him because he and Thierry Mugler were her good friends.

Today’s generation, even if it does not care to know what happened the day before yesterday, may still know of Anna Bayle.

Her career has been awesome, and has remained unsurpassed by a Filipino woman to this day, not only for the length of time she was on top but also for the conventions she broke as an Oriental. After Anna, the Oriental face, indeed the nonwhite exotic features, became the vogue in fashion.

It is no exaggeration to say that her diva presence on the catwalk—that commanded diva fees from  top fashion houses, as well— paved the way for the supermodel era of Linda Evangelista, Cindy Crawford, Claudia Schiffer, Christy Turlington.

As is often written, the New York Times coined the tag the “Anna Bayle walk” to describe the way she glided on the runway—glide, but with that perceptively coquettish move. To this day, even Anna gets amused when some, particularly the gays, love to mimic the Anna Bayle walk.

Hers was a career made for Instagram and Facebook—a pity that there was no social media in those days—because it was alluringly visual, über glamorous  and high-powered.

She was photographed by  the icons of fashion and art—Richard Avedon, Helmut Newton, Norman Parkinson, Scavullo, to name a few—and she had been a cover, many times, of Vogue, WWD, among international fashion glossies. She modeled for and knew the fashion greats, from YSL, Givenchy, Christian Lacroix, Kenzo, Issey Miyake to Valentino.

But such  feat is only half  the story, which I don’t mind repeating yet again (her profile is in my book, “i’m afraid of heights (or why i can’t social-climb): Profiles of Lifestyle celebrities), because it is unique; the other half of the story is the superhuman effort and intelligence she marshaled to get to the top.

Like: Shuttling from one collection to another all in a day, pumping herself with vitamins and starving herself to a 21-inch (was it 19?) waistline (for her 5’10” height), reinventing her look each time for a go-see with a designer, whether it was Calvin Klein or Sonia Rykiel, and finally on the runway, working to make sure the audience’s collective and demanding eye was on her.

A scholar from the Philippine Science High School, she was a premed student at the University of the Philippines when she joined a beauty contest, where top designer Auggie Cordero spotted  her. She modeled for Auggie and other top designers; from then on, Auggie became her mentor, who advised her to move to Hong Kong first to get her feet wet, before braving the modeling world in Paris.

Auggie knew that New York wouldn’t be that easy to penetrate, so he advised Anna to do Paris and Europe first which, in time, she conquered.

Today, however, Anna doesn’t even talk fashion, much less about her career.

You don’t see photographs of her now. “People have an illusion of me, and I don’t want to change that,” she said.

But, she added, “I haven’t had anything done on myself.”

Although she launched her lipstick line more than a decade ago, shortly after her retirement from modeling—she’s always been ahead of her time—her  brand bannered by no less than Women’s Wear Daily (WWD), she abandoned the fashion world to become a stay-at-home mother to only child Callum.

Callum Spence is now 20. Anna gave birth to him a year after her marriage here, at Villa Escudero, to New Zealander Simon Spence, following a  whirlwind courtship. The couple have long divorced.

Mother and son have been inseparable. Callum is working for a liberal arts degree and masteral arts degree at Sarah Lawrence College in Bronxville, New York, and Anna is proud of him, not only for such academic pursuits, but more so because “he is kind.”

When Anna retired from  fashion and decided to live on her investments, she focused on motherhood. Kinder to high school, she sent Callum to Friends Seminary, a private day school in Manhattan, described as the oldest (founded in 1786) continuously coeducational school in New York City whose mission, according to its website, is “to prepare students to engage in the world that is and to help bring about a world that ought to be.”

“They train the kids, every morning, to have 10 minutes of silence, to think and to meditate,” Anna said in our phone chat. “I like (how it encourages) sharing, introspection, sense of community, very inclusive.”

Single parenting, however, has been a challenge for this supermodel—in fast-paced  New York at that.

When Anna focuses on a goal, her whole being is wound up for the task—organized, methodical, obsessed. She was that way with modeling, and would be no less with motherhood.

“I share everything with him. We’re very close,” she said of her son.

Parenting has been a learning journey. She recalled an episode when her attention was called by the school guidance counselor.

“I was getting books for my son from the library—but all books without the father figure,” Anna recalled. “And this was in a school which had ‘banana split sessions’ for children of separated or divorced parents, to help them.

“So the counselor asked me why I was choosing only books without father figure. I said, ‘To protect my son.’

“The counselor told me, ‘You know, Anna, you can choose now whether you’ll be the mother who’ll hide things from your son, or a mother who shares. The sooner he accepts that he has no father figure, the better. If you hide things now, in the future your son would also not tell you things if only to protect you.’”

That was a eureka moment for Anna.

She said she felt fortunate that Callum didn’t make her go through the “terrible teens” as he was growing up. But when he was going off to college, she went through separation anxiety.

Anna Bayle was a tough woman as a supermodel, and  it seems, even just as tough as a mother.