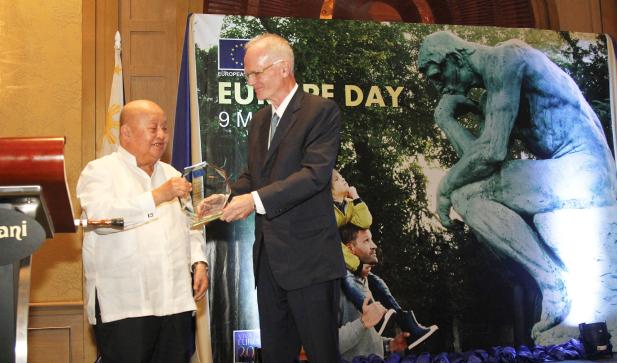 EU Ambassador Franz Jessen conferred on Wednesday, May 9, 2018, the Award of Distinction to F. Sionil Jose, National Artist for Literature, for his contributions in strengthening cultural links between the EU and the Philippines. (Photo from the European Union)

National Artist for Literature F. Sionil Jose was recently conferred an Award of Distinction for strengthening cultural links between the Philippines and the European Union (EU).

At the Europe Day reception in Makati on Wednesday, May 9, EU Ambassador Franz Jessen, who handed over the award, said Sionil Jose had “contributed significantly in bringing Filipinos and Europeans closer through his acclaimed writings, and he continues to bring hope and light to an increasingly complex world.”

As one of the country’s living literary treasures, many of Jose’s works were translated to European languages.

The award was given to Jose as the EU celebrated the 2018 European Year of Cultural Heritage.

“I am not going to be coy about it,” Sionil Jose said on accepting the award. “I’m 93 years old, and after all these many years of hard work, I know I deserve this award.”

He is also a publisher, lecturer on cultural issues, owner of La Solidaridad book shop, and the founder of the Philippine chapter of the International PEN.

“It’s not only I who deserves it, however. There are others in my generation who do – Nick Joaquin and Salvador Lopez and beyond them – the Spanish writer of the early 1900s, Rafael Palma, to Marcelo del Pilar and most of all Jose Rizal,” he said.

“I also add to this distinguished list our vernacular writers, who like most of us were rooted in the profound humanist tradition of the West,” he added.