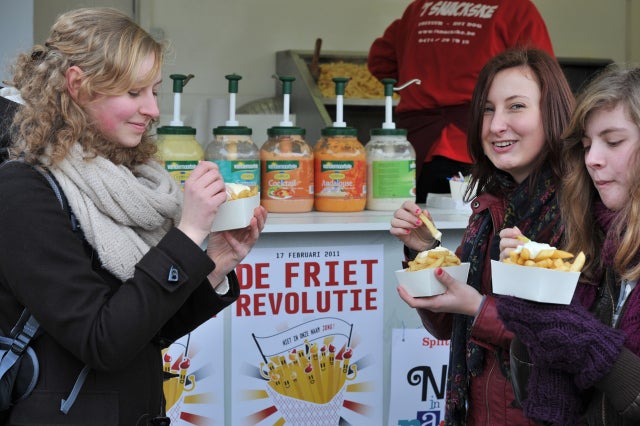 In Belgium, where hot, salty chips smeared with mayonnaise are a national institution, tampering with traditional “frites” sounds like a recipe for trouble.

But the capital Brussels is giving a futuristic makeover to some of the official stalls where the famous potato delicacies are sold to eager locals and tourists.

Eight nondescript “fritkots” owned by city authorities will be decked out with dazzling mirrored facades and special lighting.

City planners and operators alike say the upgrade will make the stalls — which are due to reopen in late 2019 — as memorably Belgian as the food they sell.

“Without frites Belgium doesn’t exist,” said fritkot operator Vuistema Kemal, whose stall in central Brussels is one of those being upgraded.

He said that chips “represent Belgium around the world.”

Brussels planners launched a competition last year to find a new design for what they call the “Fritkots of the Future”.

“We thought ‘and what if we give a model?’ — a model that is identifiable just like the telephone booths of London,” said Marion Lemesre, a senior economic affairs official for the city of Brussels.

The issue is a serious one in Belgium, whose claim of inventing “frites” is disputed by its bigger neighbor France.

Belgium’s “fritkots” even hit the international headlines when German Chancellor Angela Merkel nipped out to one in the middle of an EU summit in Brussels after Brexit talks went on for too long.

The competition was won in January by Studio Moto, an architecture firm based in Ghent, a city in the northern Dutch-speaking part of Belgium.

Studio Moto co-owners Mo Vandenberghe and Thomas Hick said their main goal during the design process was to maintain the identity of each individual chip shop.

“People are a bit particular about their fritkots,” Hick told AFP.

He said that the fritkot is “part of Belgian culture, Brussels culture, and replacing them is something sensitive, so we really had (to keep) in mind we couldn’t put something standardized.”

While all the stands will have the mirrored facade and lighting effect, each revamped fritkot is to have two colors unique to the location. One color will be used for the sign on top of the fritkot, and the other will be for the interior tiling.

Brussels has dozens of privately owned and operated fritkots too, but only locations owned by the city of Brussels are set for remodeling, including the fritkot outside the Atomium museum, a key tourist draw, as well as Place de la Chapelle, near the city’s famed antiques market.

The city will also finance the creation of two new fritkot locations, one of which will be placed at another popular historic landmark, Mont des Arts, in the city centre.

Along with beer and chocolate, “frites” are a rare unifying factor in a young country, founded only in 1830, that has throughout its short history been deeply divided between French- and Dutch-speaking communities.

They also play into Belgium’s inferiority complex about France.

Belgium claims frites were invented in the southern French-speaking city of Namur. But France of course lays a rival claim to the invention of what has become known in the United States in particular as the French fry.

Kemal, who has operated his stall at Place de la Chapelle for 34 years, said the newly designed stalls will help put Belgium’s frites on the map.

“What is good I think, is to unify all the designs of Belgium, of all fritkots in Brussels,” Kemal said. “So the tourists, the foreigners who come, they can discover it easily.”

The designers said they were working with the individual operators to make sure they work as well in practice as in theory.

“We are not trying to reinvent anything in particular,” Hick said. “We are trying to go back to the basics as much as possible.”

They will include special low-flammability timber and solar panels on the roof to reduce their environmental footprint.

“I see this as a positive sign of renewal for the city.” CC