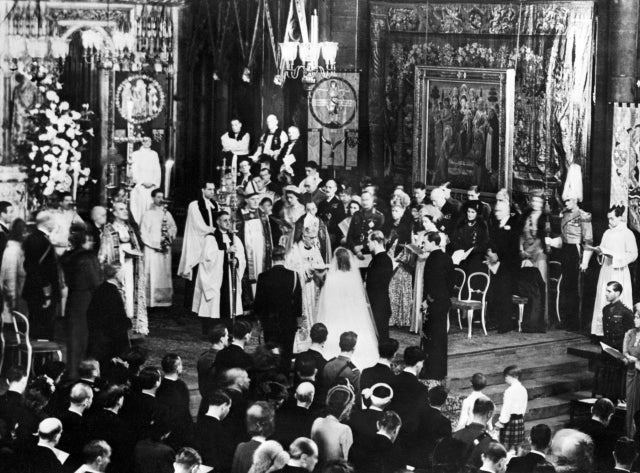 Britain has long entranced the world with its spectacular royal weddings, occasions of glittering pageantry and glamor that feed into a fascination with the monarchy.

As Prince Harry prepares to marry US actress Meghan Markle on Saturday, AFP looks back at the weddings of three other top royals.

Hundreds of thousands of people thronged London’s streets to cheer future Queen Elizabeth II, then a 21-year-old princess, as she married Prince Philip, aged 26, more than 70 years ago on November 20, 1947.

In post-war Britain, it was “a flash of color on the difficult road we’re taking,” said former prime minister Winston Churchill, then leader of the opposition Conservative Party.

It was the first British royal wedding to be filmed and broadcast live on BBC radio, with 200 million people tuning in, according to the palace.

There were 2,000 guests, among them six kings and seven queens. But memories of World War II were fresh and so several of Philip’s German relatives, including three surviving sisters who were married to German aristocrats, were not invited.

War-time rationing was still in place, even for the royal family, and the government allocated Elizabeth an extra 200 clothing coupons for her satin dress, newspapers reported.

The couple received more than 2,500 wedding gifts and women sent dozens of pairs of nylon or silk stockings, then hard to come by, to the young princess.

The couple were second cousins once removed. Shedding his titles as a prince of Greece and Denmark, he was made a British subject at their engagement, receiving the title Duke of Edinburgh shortly before the wedding.

She and Philip went on to have four children: Charles, Anne, Andrew and Edward.

“In marrying Lady Diana Spencer, Prince Charles is filling the last outstanding condition to become, in the eyes of the British, a perfect king of England,” said an AFP report about the wedding that captured world attention.

The marriage of the heir to the throne, then 32, to 20-year-old “Lady Di” on July 29, 1981 resolved the “problem of his prolonged bachelorhood,” another story said.

Diana’s youth, beauty and common touch played an enormous part in the worldwide enthusiasm for the wedding, which was beamed to 750 million viewers worldwide in 50 countries.

Her gown, a closely guarded secret, featured more than 10,000 tiny mother-of-pearl sequins and pearls and a 25-foot (more than seven meters) silk train, the longest in royal history.

The Prince of Wales trembled as he murmured “I will” in front of the 2,500 guests; Diana mixed up his names as she responded.

Back at Buckingham Palace, the “enthusiasm of the ‘fans’ of the Princess of Wales turned to frenzy” when they appeared on the balcony and exchanged a “furtive kiss,” AFP reports said.

The fairytale wedding ended in a bitter divorce in 1996 and Diana was killed in a car crash in Paris the following year. Charles, still not king, went on to marry his longtime partner, Lady Camilla Parker Bowles, at a more low-key ceremony in 2005.

Charles and Diana had two children, William and Harry.

A million people lined London’s streets and two billion TV viewers worldwide watched as Kate Middleton swept up the aisle, a “commoner” about to become a princess.

Prince William, 28, second in line to the throne, was accompanied by his brother and best man Prince Harry and mouthed “you look beautiful” as his 29-year-old bride approached.

The Duke and Duchess of Cambridge exchanged two kisses on the balcony of Buckingham Palace as the 500,000-strong crowd below chanted “kiss, kiss, kiss.”

They also took a spin in his father Charles’s classic Aston Martin sports car with a joke registration number and learner plates.

It was the culmination of a romance that began eight years earlier when they met at St Andrew’s University.

“The wedding’s show of pomp mixed with genuine affection offers the royals a chance at renewal after Charles and Diana’s traumatic public split,” AFP wrote.

Among 1,900 guests were musician Elton John, footballer David Beckham and his wife Victoria, and Australian swimming icon Ian Thorpe, along with 40 foreign royals and hundreds of dignitaries.

Kate’s sister Pippa, the maid of honor, was widely considered to have stolen the show with her close-fitting outfit.

The couple, already parents to George and Charlotte, are expecting their third child before the end of April. CC