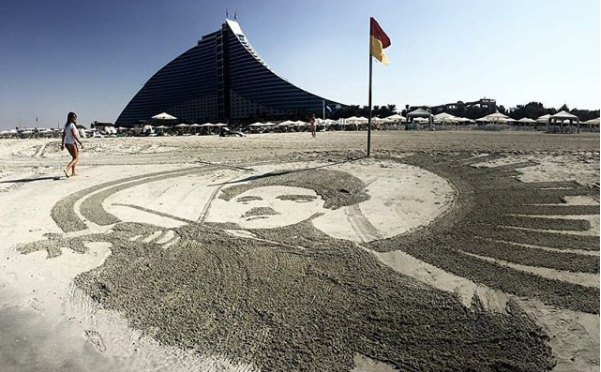 While some artists use walls, fabric and even human skin as their canvas, Dubai-based artist Nathaniel Alapide chose something that gives him more breadth: the beach, particularly its sand.

But his foray into sand art was accidental if not by fate, as Alapide shared to the Gulf News last May 2. He said he first got into after his grandmother died four years ago, in 2014.

“She pretty much raised me,” Alapide was quoted as saying. “I made a big drawing of a tree. While I was creating that, I found it very meditative. It started from there.”

Alapide has been creating sand art since then, and his intricate works can be found in the Black Palace beach, Sunset beach, as well as Kite beach near Jumeirah Beach Hotel. His sand art has attracted a lot of well-deserved attention too, not only exhibiting his prowess with the sand in Dubai, but also in the beaches of Oman, Siargao and Boracay.

However, it isn’t just sand that Alapide is known to create marvelous art works from. He is also a painter and has been invited to exhibit his works in manifold art shows, the latest of which happening in the Showcase Gallery this month in Alserkal Avenue. Alapide is the only Filipino in a collective of 11 United Arab Emirates-based artists, a laudable achievement that is definitely no small feat.

My work is up and ready. See you guys later @showcasegallery 6pm for the opening exhibition of “The Diving Bell and The Butterfly.” A group exhibition which will show works of 11 artists and curated by @annaseaman1.

And while it is fulfilling enough for an artist to have anything to completion, for the multidisciplinary and self-taught Alapide, it’s about more than just creating for himself, as it is to sharing his talents to people and inspiring them.

““I love doing what I do, creating things for people to share but at the same time I would get messages from other people who say I’ve inspired them,” Apalide said in the report. “Knowing that you inspired people by doing what you love is really rewarding. I feel lucky and grateful.” Cody Cepeda/JB