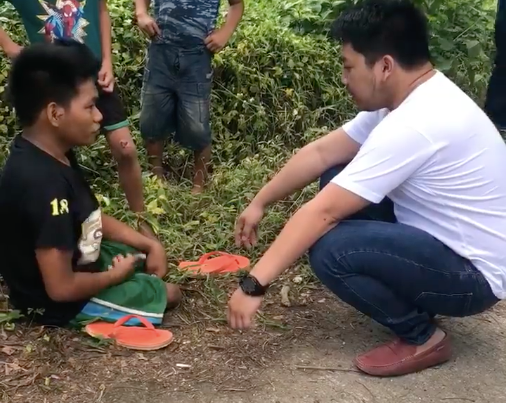 A video of three boys receiving wheelchairs from a local official in Sultan Kudarat has been making the rounds in social media. The three persons with disabilities apparently belong to one family, and the locals’ discovery of their condition has been touching the hearts of many.

Last Monday, May 14, Sultan Kudarat Mayor Datu Shameem Mastura chanced upon a young person-with-disability (PWD) while on his way back after voting in the Barangay elections. Mastura was inside his car when he saw a boy crawling on the side of the road.

In the Facebook post of Mastura made on the same day, May 14, it was stated that Mastura went down of his car, approached the boy and asked him where he was going. It turns out that the boy was on his way to his neighbor to get his cellphone back.

Mastura, seemingly moved, gave the boy some money and promised him he would go back the following day to give him a wheelchair.

(According to the mayor, he will return to this barangay and to this child to give him a wheelchair and other assistance. He said he does not want to again see the child crawling on the street, so he will buy him a wheelchair.)

It has since been discovered that the boy Mastura was supposed to visit wasn’t the only one who had a disability, but also two of his other siblings. In a touching gesture, Mastura thus gave the boy and his two siblings special wheelchairs to help them get around, as well as groceries and a sack of rice for his family.

The video tugged on the heartstrings of many people around the country, and has garnered 901,000 views, 38,000 likes/reactions and 26,000 shares as of this writing.

But while many found his gesture touching, others questioned why he had to take a video of such. Mastura clarified that he was not doing this for attention or politics; he said everyone, politician or not, should all help those who are in need.

Mastura stated that he only wanted to take the video because he wanted to show other leaders how they should also help in this kind of way.

(We are the ones who ought to serve the people. Let’s not choose who we will help, whether you are Muslim or Christian.) JB