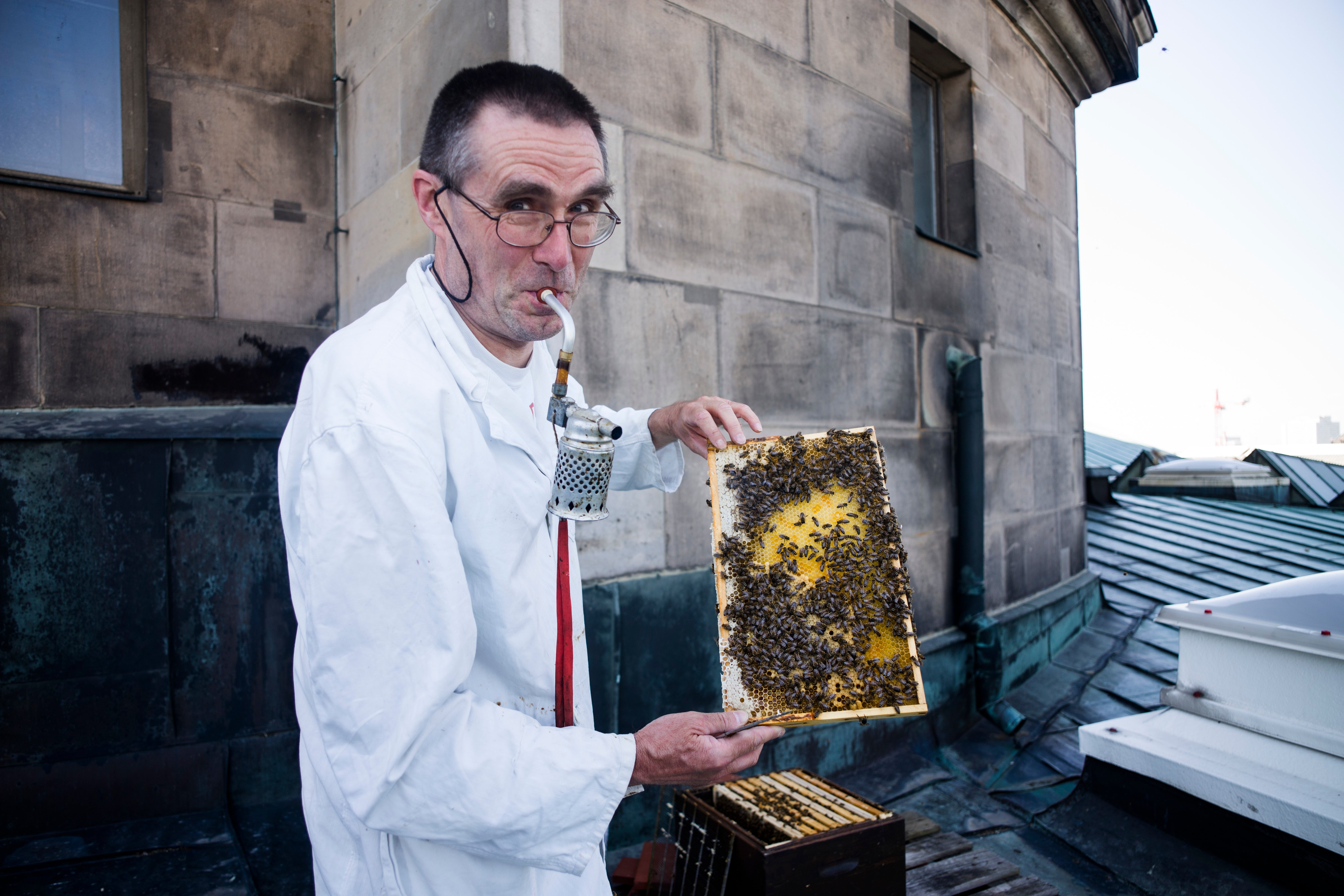 Beekeeper Uwe Marth shows a honeycomb produced in a honey bee hive at the roof of the Berlin Cathedral in central Berlin, Germany. (AP)

BERLIN—On the roof of Berlin’s cathedral, bees are buzzing.

Beekeeper Uwe Marth pulls out a honeycomb produced in the hive he tends beneath the dome of the neo-baroque landmark, a tourist magnet in the German capital — and home to perhaps 30,000 bees. On a warm but windy May day, the insects have been busy feeding on chestnut blossoms, the trees of the Unter den Linden boulevard and flowers on nearby rooftops.

The hive on the riverside Protestant cathedral is one of more than 15 on prominent Berlin buildings that are the brainchild of “Berlin is buzzing!”— an initiative launched in 2010 by biologist Corinna Hoelzer and her husband.

Inspired by an amateur beekeeper who established a bee colony on the roof of a Paris opera house in the 1980s, Hoelzer sought to draw attention to the plight of bees and other insects with prominently placed honeybee colonies.

Bees and other pollinators have been on the decline for more than a decade, and experts blame a combination of factors: insecticides called neonicotinoids or neonics, parasites, disease, climate change and lack of a diverse food supply. A significant part of the human diet comes from plants pollinated by bees — not just honeybees, but hundreds of species of lesser-known wild bees, many of which are endangered.

Sunday is the first World Bee Day — an idea approved by the U.N. General Assembly in December and initiated by beekeepers in another European country, Slovenia. On Wednesday, German Chancellor Angela Merkel urged people “to think about biodiversity and do something good for bees” to mark the day, saying in her annual budget speech to parliament that it is “something that perhaps seems a bit small to some people, but is actually really big.”

“Honeybees are a great reference to explain everything else,” Hoelzer says. “Without pollinators, we don’t have a healthy ecosystem.”

Over the past few years, “Berlin is buzzing!” and its sister initiative “Germany is buzzing!” have put up hives and bee “hotels” on buildings including Berlin’s state legislature, a city theater, a planetarium and the German finance ministry, as well as in the park of the German president’s residence.

“Right at the beginning, we had to fight with caretakers because they were afraid they would be stung,” Hoelzer says. “A lot of them have no idea how bees react.”

But such hiccups were quickly overcome. The initiative is now active in 25 German cities, organizing seminars on “bee-friendly gardening” among other activities. And as a small added bonus, honey from Marth’s bees is sold in the cathedral shop several stories below.

While bees are woodland creatures at heart, “they can live up high,” he says. “They only need water and a good supply of food.”