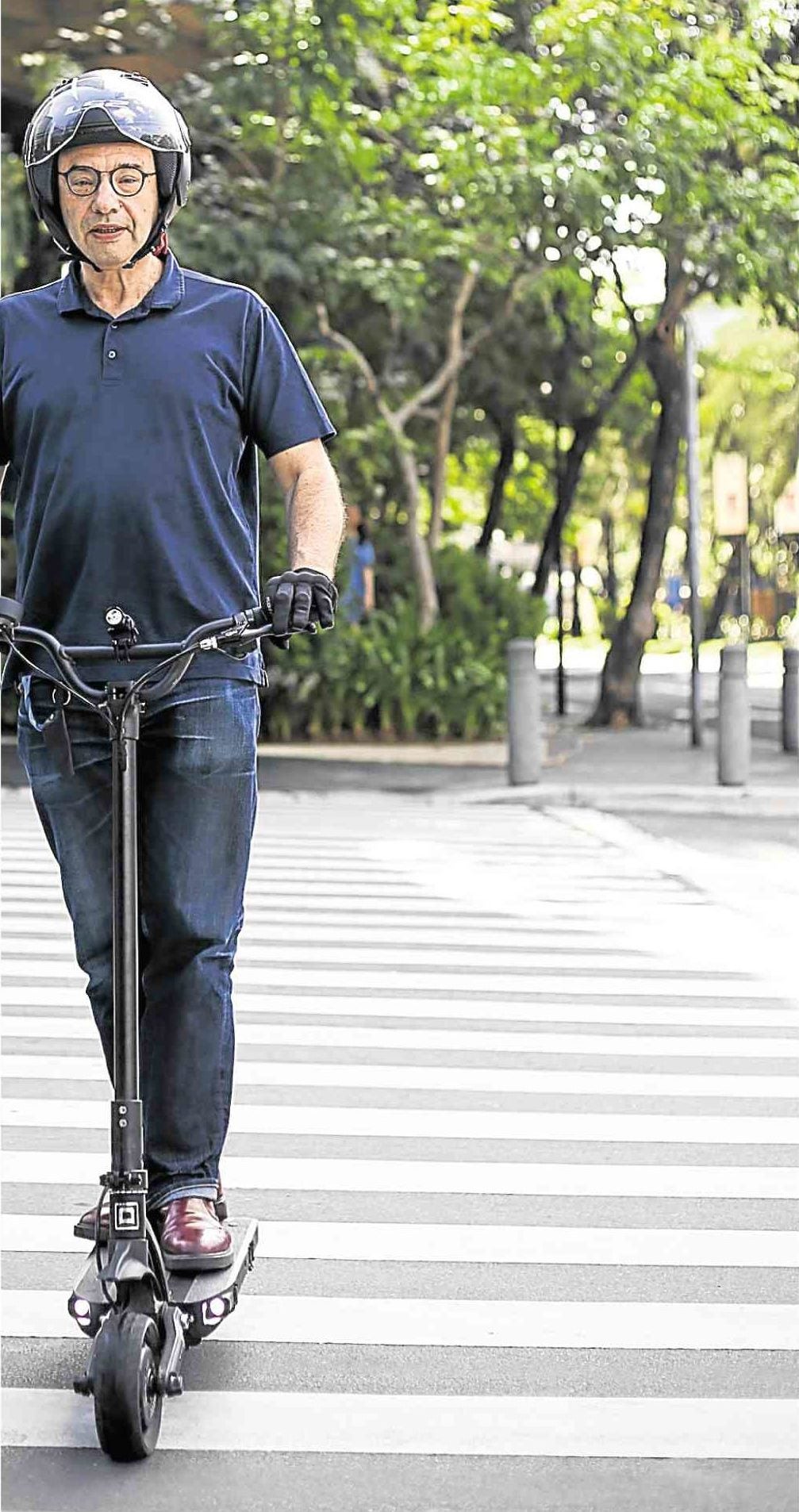 At 65, French diplomat Yves Zoberman can use the embassy car as a privilege. But unlike other men of the right age, he’d rather get around the metropolis on an electric kick scooter.

The counselor for cooperation and cultural affairs of the French Embassy claims it takes less than five minutes to travel from his digs at Rockwell to his office on Gil Puyat Avenue in Makati.

Zoberman brings the e-scooter to the office and charges it as he does his laptop. The e-scooter has been part of his lifestyle in getting around the 3-km radius from his office to the French Embassy residence in Forbes Park, or his Pilates class in Bel-Air, Makati.

On longer distances, a 12-km trip from Makati to Ateneo in Quezon City takes him 35 minutes on the e-scooter instead of 90 minutes by car.

Zoberman came across the e-scooter when he bumped into young entrepreneur Gardo Vazquez in the elevator of their condominium. Vazquez seamlessly brought the e-scooter into the shaft.

With heavy traffic and high parking fees, more people are turning to e-scooters.

Erwin Buencamino, founder and president of Electric Kick Scooter Philippines Club, reports that it has some 2,400 members from as far as Zamboanga.

Unlike riding a bicycle, which requires skill in getting on the saddle, balance, pedaling, dealing with chain rings and dismounting, one just has to step on the e-scooter and regulate the speed with the throttle.

Buencamino turned to the e-scooter as alternative to motorcycle. He notes that in Singapore, the personal electric mobility device has been a trend.

A call center agent and weekend entrepreneur, he was weary of paying P120 for a nine-hour parking fee and coping with fluctuating gasoline prices.

He didn’t want to deal with the sweat and changing clothes if he took the bicycle to work. Moreover, during rainy days, when Buencamino has to get a taxi, drivers don’t allow bicycles inside the trunk.

The e-scooter became an affordable solution. A 7-km ride from Cubao to his office in the Ortigas Central Business District takes him less than 15 minutes at 5 a.m. before the morning rush.
When he takes a cab on rainy days, the e-scooter is easily folded and packed inside the taxi trunk. Depending on the brand and its make, the e-scooter weighs less than 30 pounds.

“You don’t have to deal with parking fees, monthly maintenance like changing oil for other vehicles. Engine-wise, it’s good for five years,” Buencamino says.

The e-scooter is so handy that it can be folded up and brought inside the mall. “In major malls, you remove your helmet, gloves and are ready for inspection. The guards have been cooperative,” he says

Members of the Electric Scooter Philippines Club have met up in Bonifacio Global City (BGC), University of the Philippines, and Alabang with their different brands, the most popular of which are Xiaomi and Segway. A female member logged 6,000 km on her Xiaomi e-scooter.

“There are many affordable e-scooters of good quality,” Vazquez says.

Then there are e-scooters that are pricey due to the long-range battery life, double braking system and design.

Vazquez, whose company Filgenius distributes the Korean brand, Dualtron, has been selling well over a few months despite the price range of P85,000 to P200,000.

He started with a Xiaomi e-scooter to avoid the traffic from Rockwell to Forbes Park. The
2-km trip took him 15 minutes. However, going up the incline along Kalayaan was too challenging, since he weighs 200 lbs.

“I needed to push the scooter,” he recalls.

He switched to the Dualtron brand which pioneered in the all-wheel drive e-scooter designed for off-road riding. It’s ideal for uneven pavements and the challenging road conditions around the Philippines. For him, the design can carry his weight on road inclines.

“It has more torque, especially if you are going uphill,” he says.

“This is pricey because it uses branded batteries and advanced technology, and it’s fast. For speed, you get a scooter with higher capacity batteries, higher voltage, better specs on hubs—the motors, the robust frame and better quality in everything else,” he says. “For maintenance, you just check the screws and recharge.”

Vazquez’s customers have been happy, as the e-scooter has helped them get around from Quezon City to Marikina or Pasig or Makati to BGC. From Makati, Zoberman went to Pasay City for a press lunch on the e-scooter, passing sidewalks and bicycle lanes.

Vazquez points out one downside: “All manufacturers say that you don’t ride in the rain, and don’t wash it or get it wet because it’s electronic. The roads are slippery, and visibility is compromised. Other drivers might not see you, as well.”

Nonetheless, the e-scooter is one solution to getting around the city.

Zoberman says, “It’s not only cool, but you lessen your carbon footprint and reduce greenhouse gas emissions.”

Ultimately, the e-scooter draws attention or merits “the neck-breaking stare.”

“Many pedestrians will be staring at you when you pass by,” says Vazquez. –CONTRIBUTED