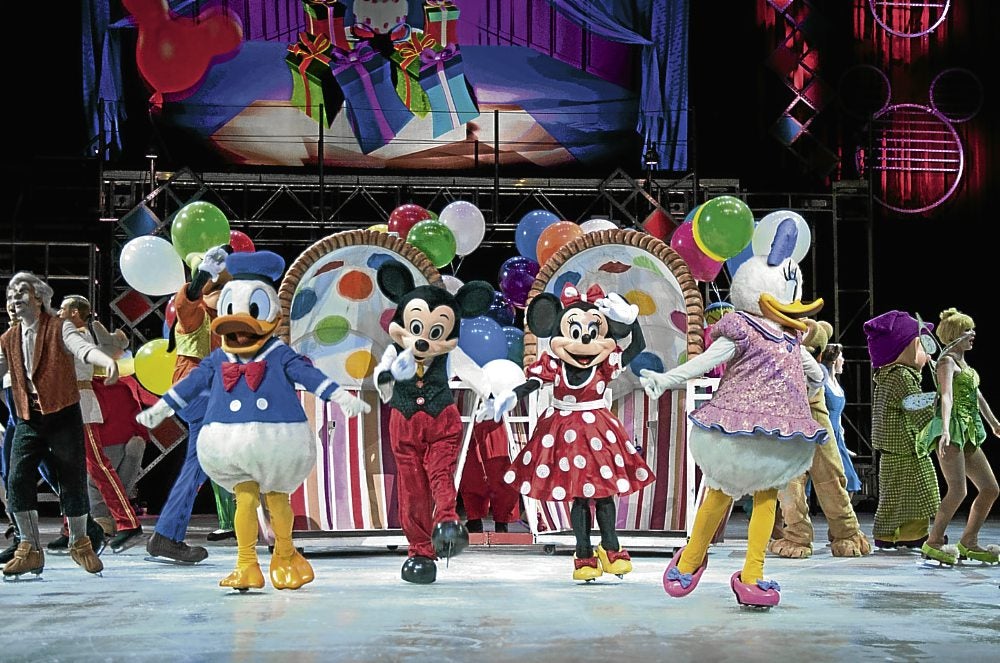 DISNEY on Ice stars Mickey Mouse and Minnie Mouse come out from hiding and merrily welcome their guests.

Christmas and New Year just passed by but there is still a reason to rejoice as Disney on Ice comes back to Manila with its newest show “Let’s Celebrate!”  showcasing over 50 Disney characters on ice skates.

“Let’s Celebrate!” is running at Smart Araneta Coliseum until Jan. 3.

“We love coming back to the Philippines because Filipinos are the loudest in the world,” Zach Ellard, regional marketing director in Southeast Asia and India, said.

He added that their team loved the response of the Filipino audience during their previous shows in Manila.

Aside from the Disney characters on the ice rink, audiences can also look forward to Filipina skater Justine Lopez, who plays Princess Tiana, the newest Disney princess from the 2009 film “The Princess and the Frog.”

“Lopez plays one of the main roles in the show and, aside from her, there are two more Filipinos in the cast,” Ellard said.

The show kicks off with well-loved Disney characters like Donald and Daisy Duck, Pluto, Minnie and Mickey Mouse.

What follows is an exhibition of spectacular choreography and magnificent props—the “Merry UnBirthday Party” with Alice, the Mad Hatter, Fairy Godmother and Pinocchio.

Popular Disney villains like Cruella de Vil, the witch from “Snow White” and Jafar don’t miss the chance to display their wickedness as they join a very festive Halloween presentation led by Tim Burton’s Jack Skellington.

After the Halloween party, the coliseum is filled with love as Minnie’s wish of finding her Valentine is granted by the Fairy Godmother with the help of the dearest Disney couples, such as Jasmine and Aladdin, Beauty and the Beast, and Mulan and Shang, among others.

Lilo and Stitch also participate in the celebration as they bring a luau into the ice rink.

From Hawaii, Mickey takes the crowd to different parts of the world and makes them experience different celebrations across the globe like Rio de Janeiro’s Mardi Gras, Japan’s Cherry Blossom Festival and China’s Lunar New Year.

The adventure ends as Mickey and his friends celebrate the holidays in their home and share a merry Christmas with the cast of “Toy Story.”

Your favorite Disney characters are waiting for you to see them perform live on ice skates. For tickets and show schedules, call Ticketnet at 9115555.