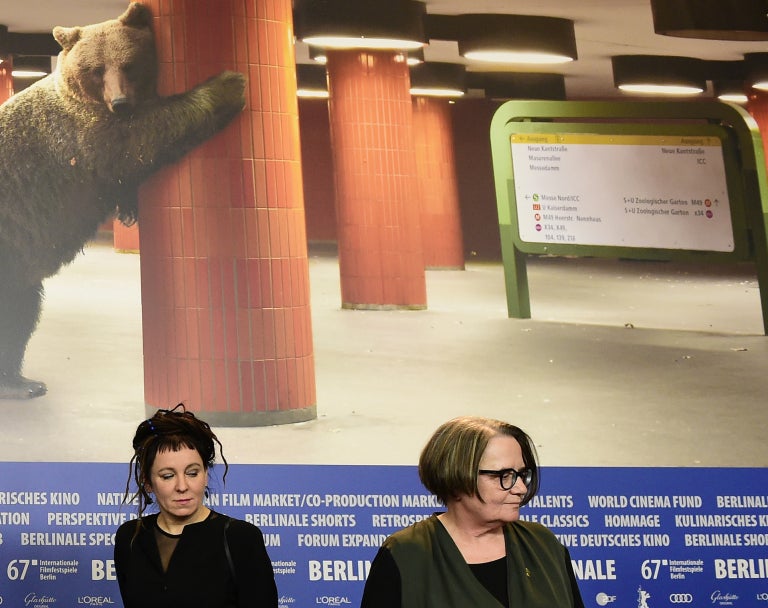 Olga Tokarczuk: Literature on the move

Olga Tokarczuk, who won Britain’s Man Booker International Prize on Tuesday, is considered the most talented Polish novelist of her generation, with a string of bestsellers to her name and a style that mixes the real with the mystical.

Born on January 29, 1962, in the western town of Sulechow, she is the author of more than a dozen books.

After studying psychology at the University of Warsaw, she worked as a therapist for a few years in the western city of Walbrzych and published a collection of poems before taking a stab at prose.

Following the success of her early books, she turned to writing full-time and settled in the Sudety mountains near the Czech border.

Her books portray a polychromatic world perpetually in motion, with no fixed point, with characters whose biographies and personalities intermingle, and with details drawn from reality, using language that is both precise and poetic.

“I don’t have a clear biography of my own that I could recount in an interesting way. I’m made up of the characters that I pulled out of my head, that I invented,” Tokarczuk said in an interview with The Polish Book Institute. “I’m made up of all of them. I have a huge, multi-frame biography.”

Tokarczuk has won numerous prizes and honors, both at home and abroad, including Poland’s most prestigious Nike Literary Award, twice.

“She’s a mystic in constant search of the truth, a truth that can only be perceived on the move, by transcending borders,” said Kinga Dunin, a friend and fellow writer.

A vegetarian and environmentalist with long, dark dreadlocks, Tokarczuk is a political activist who does not shy away from criticizing Poland’s rightwing Law and Justice (PiS) government.

She received death threats in 2015 after telling state media that an open and tolerant Poland was a myth. Her publishers assigned her a security detail for a week.

Tokarczuk’s first novel, “The Journey of the People of the Book”, released in 1993, chronicles a failed expedition to find a mysterious book.

Her 2007 release “Flights”, the book she and her English translator won the Man Booker International Prize for, is a celebration of modern nomadism and human anatomy.

Meanwhile, “The Books of Jacob” spans 900 pages, seven borders, three religions and five languages. It traces the little-known history of Frankism, a Jewish messianic sect that sprang up in Poland in the 18th century. Released in 2014, its pages are numbered in reverse in the style of Hebrew books.

It became both an award-winning bestseller and the subject of heavy criticism from nationalist circles in Poland.

Tokarczuk also co-wrote the screenplay for the Polish crime film “Spoor”, which won the Alfred Bauer Prize for a work of particular innovation at the Berlin film festival in 2017.

“Spoor” was also selected as Poland’s entry for the best foreign language film at the 2018 Oscars.

When not traveling, Tokarczuk divides her time between an apartment in Poland’s western city of Wroclaw and her mountain home.

Her books have been turned into plays and films and translated into more than 25 languages, including Catalan, Hindi and Japanese.

The mother of one is a known animal-lover with a keen interest in astrology and psychoanalyst Carl Jung. JB