A French ‘café-concert’ in the financial district | Lifestyle.INQ ❮ ❯ 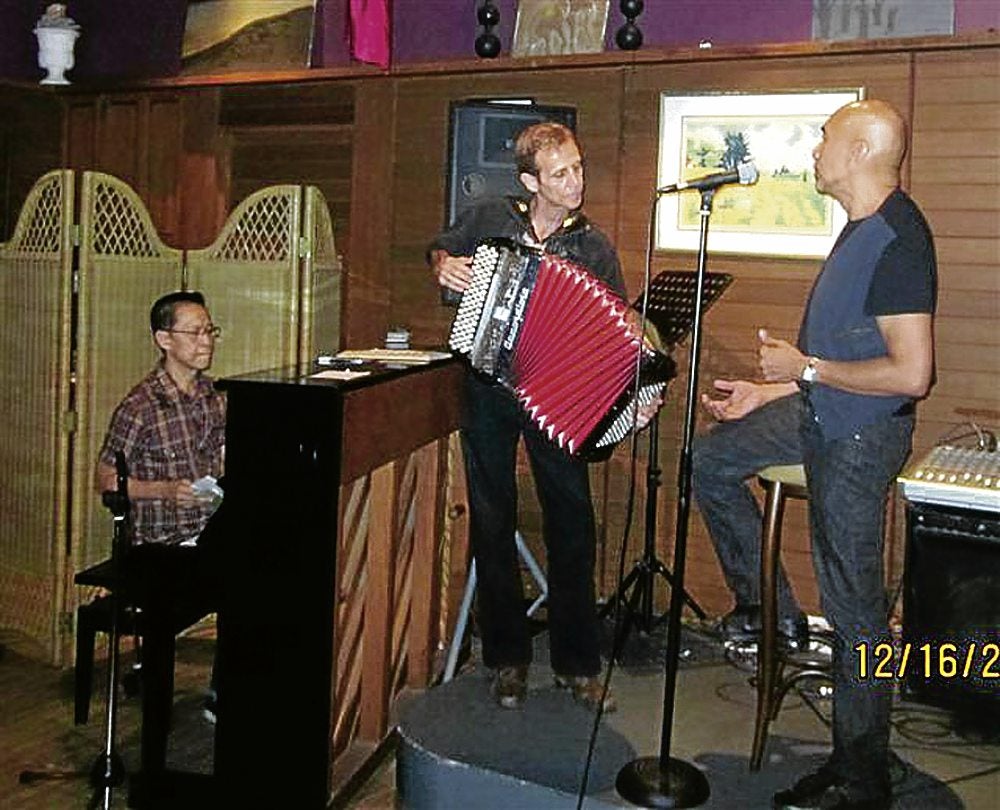 A French ‘café-concert’ in the financial district

Drop by “La Cuisine Française” (Sedeño and San Agustin Streets, Salcedo Village, Makati) on any given evening, and chances are, you will hear a French accordionist singing Edith Piaf songs; or a French jazz trio; and maybe singing actor Tony Marino (“The King and I”) belting out Broadway favorites like “Cabaret” and “I Am What I Am.”

The accordionist is Christian Herve, who has an interesting story to tell. He usually plays Monday.

“La Cuisine Française” is owned by banker Jean d’Orival of Paris and his wife, Michelle Frias from Dapitan City. They met in Hong Kong, where Michelle used to be chief purser of Cathay Pacific, and have been married for 21 years.

“I’m still alive!” quips the Frenchman. They have two children.

As far as d’Orival is concerned, his bistro is a Caf’conc’ (Café-Concert), which has a century-old tradition in Paris.

“It is a place where you eat well, and are seated comfortably. The music is never too loud, so you can talk. But guests are not supposed to sing. This is a new concept in the Philippines, so we can get it known here.”

In keeping with the concert tag, he is looking for classical musicians—“but no drums. These are noisy!”

A onetime protégée of the late National Artist Rolando Tinio (“I owe everything to him”), Marino was based in New York from 1969 to 2007, doing Broadway musicals like Stephen Sondheim’s “Pacific Overtures.” In between, he would return to the country to do shows with Repertory Philippines and Tinio’s Teatro Pilipino.

Marino is best known for playing the Siamese monarch in Rodgers & Hammerstein’s “The King and I” (a year-long Australian production in 1992) opposite noted English actress Hayley Mills.

The former child star of Disney’s “Pollyana” was by then in her mid-40s. He enjoyed good rapport with her. As Marino recalls: “She was telling me how she would join people in the streets. She was into Hari Krishna. She was very much into Eastern religion.”

Accordionist-singer Herve first came to the Philippines in 1981, and never forgot the country. In fact, he returned here when his life in Europe became unhinged.

“My life is a drama,” he declares. “I am not proud of it. I was very famous in France. I had a rock band and we concertized all over Europe.”

Then he became a junkie, and lost his wife, his career, everything. “I almost killed myself,” Herve shares.

He was down to 40 kilos, and spent two months in a hospital. By that time, he was back in the Philippines, and he lost his head over a bar girl in Angeles City.

Nevertheless, he says, “she gave me the opportunity to rediscover my music.” He went into rehab, and today is as good as new.

“Music saved my life,” Herve declares. “Without music I’m dead! My obsession is to create.”