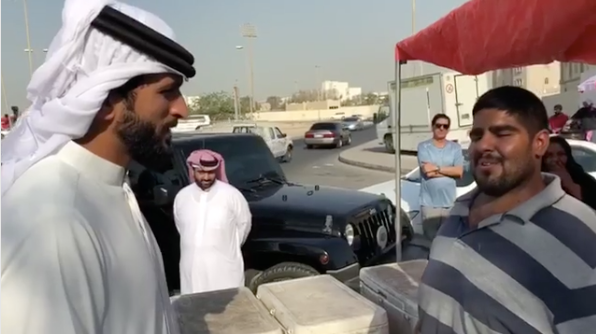 Mohammed Ali Falamarzi was merely peddling fish on the roadside when the Bahraini prince walked up to him and offered him a business, as per the Gulf News today, May 24. Sheikh Nasser promised Falamarzi a license as well as a shop to run his business. He also asked if Falamarzi was in need of a boat.

If Falamarzi accepts the offer, Sheikh Nasser would also make him a regular supplier of fish to LuLu, an Indian major hypermarket chain headquartered in Abu Dhabi and operating in 134 locations.

A spokesperson for LuLu said in the report that following the offer, one of their outlets in Bahrain will start purchasing Falamarzi’s daily catch.

It turns out that this isn’t the first time Sheikh Nasser encountered Falamarzi. He apparently had seen the latter many times before on the streets and was stricken by how happy Falamarzi was about his job as a fisherman.

“[The Sheikh] sees this fisherman quite often,” a source was quoted as saying in the report. “The fisherman used to talk positively and proudly about Bahrain and was always cheerful about his job. That’s why the Sheikh thought of doing something for him.” Cody Cepeda/JB