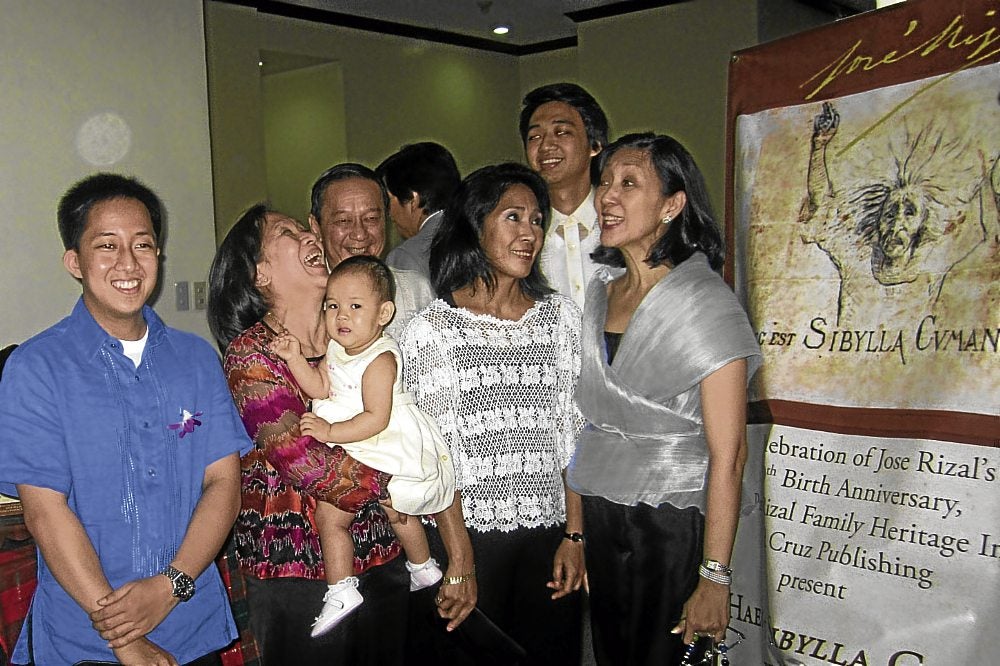 DECENDANTS of Rizal at historic reunion and book launch

It was with an exciting sense of discovery that we accepted Gemma Cruz Araneta’s invitation to attend one rainy evening the launch of José Rizal’s “Haec Est Sibylla Cumana” book.

Calling it a launch is hardly appropriate. It was a gathering of exceedingly lucky individuals, blessed to share lineage with the country’s most revered hero.

Most are familiar with the Rizal of “Noli” and “Fili” which have been done to death on local television and cinema. Ditto with his love affair with Josephine Bracken; his anti-Catholic beliefs and supposed retraction; and his politics through peaceful means.

Few, however, have dealt with the noncelebrity aspect of his persona, except for “Lolo José: An Intimate and Illustrated Portrait of José Rizal,” written by his grand-niece Asuncion Lopez Bantug, with a preface by Nick Joaquin, also the book’s editor.

Even more special  is the publication of “Sibylla Cumana,” handwritten and drawn by Rizal during his exile in Dapitan in 1892-1896.

This jewel of a book, from Cruz Publishing, unveils “a panorama of Filipino thought, customs, interests and practices at the end of 19th-century Filipinas. They are also mostly irreverent, risqué and downright funny, a revelation of Rizal’s unfailing sense of humor,” writes Chitang Nakpil, representing the publishers.

Apparently, the book of oracles had been with Paciano Rizal’s family for 114 years, waiting for that appropriate moment for it to be shared with the public. This came on Dec. 8, 2011 on the occasion of Rizal’s 150th birth anniversary.

At the launch were the various descendants of Rizal, including Chitang’s daughter Gemma.

There was Ismael Guerrero Cruz of Cruz Publishing; José Rizal Lopez and Marlene Lopez Jacinto, who designed the book.

Araneta said that for the first time since the Indios Bravos was formed in Paris, the trio of Rizal, Juan Luna and Felix Resurrection Hidalgo were together again on the Ateneo Rockwell stage, with a Rizal portrait by Juan Luna on an easel owned by Hidalgo, and the original copy of the book.

Indeed, this clan knows how to dramatize a historic occasion.

Araneta called onstage George Aseñero, whose grandfather was one of the pupils of Rizal at the school he set up in Dapitan. Grandfather Mauricio was a bright young boy who, upon seeing an American soldier trampling on the map made by Rizal, called his attention, saying: “Sir, that is a topographical map of Mindanao.” Perhaps, because of this incident, conjectured Araneta, it became much easier for the Americans to conquer Mindanao.

Aseñero affirmed Rizal found Mauricio or Morris an exceedingly bright but naughty and playful boy, forever overturning the bottles in the house. Perhaps he and his friends were bored with the serenity of Dapitan described in Rizal’s “Retiro.”

The book’s graphic designer, Marlene Lopez Jacinto, has distinct memories of the book and the game. Rizal gave the original copy to his sister Narcisa (Marlene’s paternal great-grandmother), who later gave it her eldest son, Antonio Rizal Lopez, whose wife Emiliana Rizal, only daughter of Paciano   (Marlene’s grandmother), took special care of it even during the war.

It was then entrusted to her eldest son Francisco Rizal Lopez (Marlene’s father) as a legacy to the Paciano Rizal heirs.

As a young girl, she would play the game with the family.

What stuck to her mind as a kid were the questions: Will I get married? Which of the two wears the pants? She found the questions odd and the answers even more puzzling.

“They are downright funny, witty, with a lot of depth and wisdom. This oracle, indeed, appeals to many different ages.”

Araneta herself marvels at Rizal’s talent in recycling. “The cover of ‘Sibylla’ was made by Rizal himself from a Manila envelope, twice recycled. One can still read the return address, a motor company in the United States of America, Washington, I think. He must have inquired about machines he needed in Dapitan, a pump perhaps for the water system he was setting up. At first, he drew the family tree on the envelope but abandoned the idea and used it instead for the cover of his oracle game. Traces of the family tree are still visible on the inner back cover.”

Had Araneta not pointed it out, we wouldn’t have noticed that the corners of each page had been carefully rounded by Rizal with incredible precision. He bound the book himself and on the cover drew a scary picture of the Sibyl of Cumae with piercing eyes, outstretched arms, and windblown hair.

From Inquirer columnist Randy David: “Ironically, both his detractors and admirers thought that he was busy doing secret political work while on exile. It is not farfetched to think that if the manuscript ‘This  Is Sibylla Cumana had fallen into Spanish hands, his enemies would have tried to decipher it for hidden messages.”

Serafin Quiason, former chair of the National Historical Commission, writes in the foreword: “The ‘Sibylla Cumana’ reveals the multifaceted aspects of Dr. Rizal’s persona—insightful wit; fine sense of humor; open-mindedness; unusual psychic sensitivity; astonishing command of Tagalog, Latin, Greek, German, English, French and Spanish, to mention just a few; and, above all, his profound and wide knowledge of the literary masterpieces of the Greco-Roman world.”

Marlene recalled meeting as often as weekly with the project committee on the book. Her father had asked her to lend her graphic-design expertise to the project and, like every relative, felt honored to do so without profit.

Even nonrelations like Konrad Woelhaf, a German resident who reproduced the octagonal wooden top, donated his services; as did National Artist Virgilio Almario (Rio Alma) who did the Filipino translation.

This was a unique book-design project, both a historical treasure and an interactive game book, so the creative parameters had to be more open, Marlene explained.

“Foremost was to reproduce Rizal’s book as close to the original as possible… Rizal set the highest standards and it was certainly a challenging path to follow. With the committee’s approval, it was decided to reproduce his book without any alterations or additions,” she said. “The most difficult part was to match his handwriting, then package the book and the top in a way similar to how Rizal had encased his.”

Each individual has his favorite stories of the genius of Rizal. Those of Aseñero’s include one saying that, of the many Sybillas in history, Rizal chose Cumana who, in one of her oracles, stated that the Redeemer would come to save mankind. Aseñero thinks no one knows if Rizal felt that he, too, could have been a redeemer to liberate his people.

But in a letter to his mother, Rizal wrote that “Christ to him was the one man who most exemplified what man should be,” a rather uncommon focus on the humanity of Christ, instead of His divinity.

Another story is of why Rizal drew Sibylla like an old woman in his book. The gods, said Aseñero, granted Sibylla immortality, but she forgot to ask them not to age her. She was allowed to live forever but she grew old.

Finally came the part all were waiting for, the game which turned out to be the most hilarious part of the evening.

First question was addressed to President Aquino:  Would I get married? The answer: You will do well marrying, but do better not marrying. It took some seconds before the audience burst into laughter.

Emboldened by the results of the first game, Butch Aquino, with Larry Henares seated beside us, started asking for whom the second game would be directed. Johnny Ponce Enrile was the popular choice.

Will I live long? The answer: It is up to you to lengthen it, by being methodical in the way you live. Otherwise, it will be very brief and death will surprise you when you still have done nothing.

Naturally, the hall reverberated with laughter.

Araneta joined in saying that Rizal did say of his game that after his death he would be slandered.

For the third game, there couldn’t have been any other choice but GMA.

What do they say about me? And the answer: They say you will do better, showing more sense.

With that, the evening ended with a bang. The humorist in Rizal showed he could, indeed, be a great entertainer.