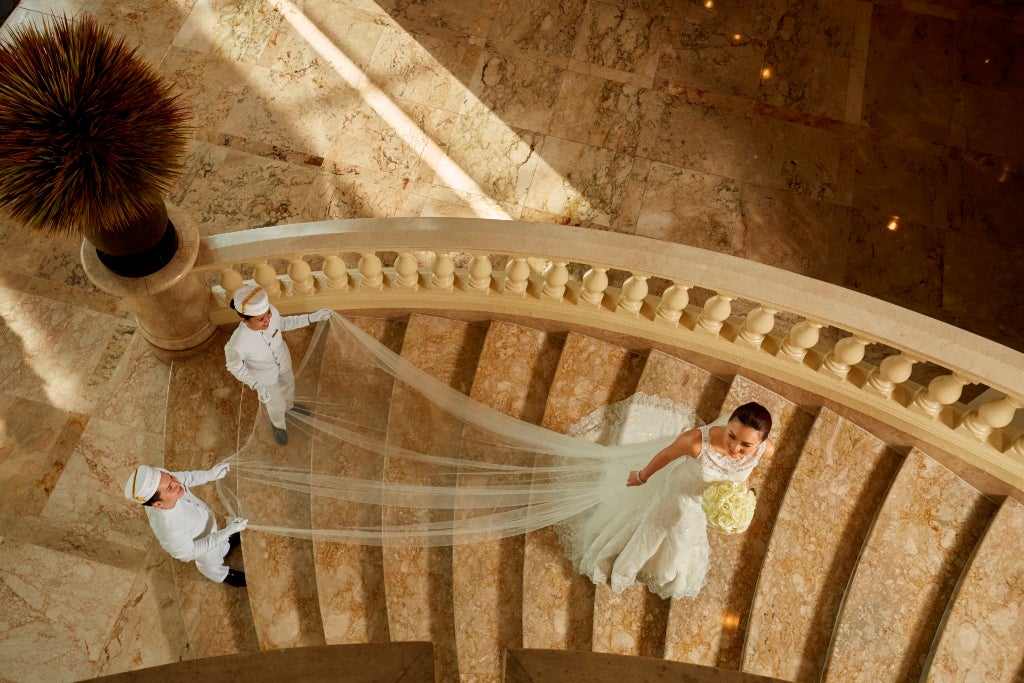 Brides never miss an opportunity for a photo-op on the grand staircase of The Pen.

Forty-two years ago, The Peninsula Manila opened its door to its first wedding reception. This year, as the hotel hosts its 5,000th wedding reception (and counting), The Pen is bringing back its curated wedding fair, a one-day affair with event-planning industry leader Rita Neri at its helm, on June 9, from 10 a.m. to 6 p.m.

The grand staircase of The Lobby will be garlanded with flowers, designed by floral artists Teddy Manuel and Zenas Pineda.

The upper lobby will be transformed into a luxe popup space showcasing the breathtaking jewelry creations of Jewelmer, Bulgari, Charriol and Denovo Diamonds; honeymoon destinations from nine Peninsula hotels and Amanpulo; art pieces from Salcedo Auctions; holistic vacations at The Farm at San Benito; capsule collections from Rosa Clara and Vera Wang; and lifestyle selections from Pottery Barn and West Elm.

“We are proud of the reputation we have built over more than four decades as an exceptional wedding venue,” said Mark Choon, general manager of The Peninsula Manila.

“I think this stems from the fact that we approach every wedding celebration as an adventure, so whether it’s a traditional ceremony or a themed extravaganza, we make it a point to deliver on our promise to make a couple’s wedding day an unforgettable moment in their life.”

A carefully curated gathering of the country’s most exclusive wedding suppliers will be located at the Conservatory, where would-be brides and grooms can seek invaluable, seasoned advice.

Salcedo Auctions’ Richie Lerma is scheduled to talk about art as an investment, and Jewelmer will have an expert discuss the timeless allure of the Philippine South Sea pearl.

The day will culminate with a fashion show with the stunning bridal gowns of Jojie Lloren and Joey Samson, alongside Mark Bumgarner, Michael Leyva and Mak Tumang.

The Pen’s partnership with Rita Neri, president and CEO of Rita Neri Event Planners, goes way back to the time when Neri was still doing wedding fairs. Her company is marking its 25th anniversary.

Neri shared with Inquirer Lifestyle her Top 5 advice to would-be brides and grooms:

1. Plan early. Neri said today, planning a wedding a year in advance is already too short. “If you plan too late, you might not get the suppliers you want. They might already be booked,” she said. And, should there be any problems, such as misspelled names on your wedding invitation, you still have enough time to make necessary corrections.

2. Check your documentation. Once, Neri recalled, a groom didn’t have his baptismal certificate and discovered, to his dismay, that the church where he was baptized burned down years ago. Some couples are also based abroad. “So who’s going to pull out your documents in, say, Bicol? It has to be a member of the family.”

3. Be realistic with your budget. The surplus of wedding magazines, plus the constant checking on Pinterest, has made women dream of many things they cannot afford. “They want cascading flowers from the ceiling, but can your budget support it?” Neri pointed out. Determine first your priorities—such as photographers and videographers, caterers, etc.

4. Make sure you and your groom are in sync. Your vision of the wedding should more or less match. “The bride has already researched everything, while the groom is saying, ‘Why are you doing all this? I’m just happy to show up and say I do.’ You have to get the groom on board,” she said.

5. The secret is in the details. A good coordinator will set you on the right track. The details are often where everything can go wrong, such as the sudden disappearance of your dad, for instance, when it’s time for the father-daughter dance. Don’t expect your bridesmaid to search for him. She’ll usually be busy, Neri said, drinking wine or taking selfies. “Even if they’re your best friends and they love you, looking after you during your wedding day will not be their priority. You did not pay them to do it. So hire a professional.”

The single most common mistake, however, is not allocating enough budget.

“You get what you pay for. If you want to feed monkeys you give them peanuts. If you’re going to get married and you’ll end up cost-cutting in the wrong places it will really show,” Neri said. “You will always go beyond the budget—always—because along the way you will see things.”