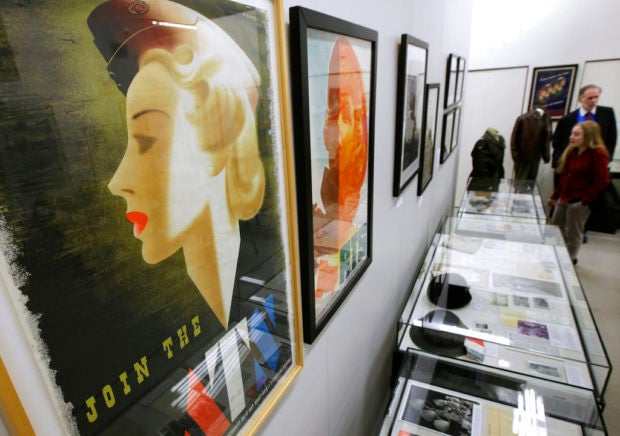 In this Monday, May 21, 2018, photo, a British World War II recruitment poster, left, created by graphic designer Abram Games, to encourage women to join the Auxiliary Territorial Service, forms part of a new exhibit called "Women in WWII: On the Home Fronts and the Battlefronts" at The International Museum of World War II, in Natick, Mass. The exhibit explores the important and unconventional roles women played in every large nation that fought in World War II. (AP Photo/Steven Senne)

NATICK, Massachusetts — The terrors of World War II impacted most of the world’s women, both on the home and battlefronts.

A new exhibition opening Friday at the International Museum of World War II in Natick, Massachusetts, highlights just that — the important and sometimes unconventional roles women took on during the war.

“It’s about the human story,” founder Kenneth Rendell explains. “We’re thrilled to have the opportunity to showcase and honor women’s service to the war effort.”

“Women in WWII: On the Home Fronts and the Battlefronts” is composed of more than 100 artifacts from the U.S., Soviet Union, Germany, Japan, France and Great Britain.

For many women, wartime was about more than rationing food for their families.
In the Soviet Union, 400,000 women drafted as “Red Army girls” filled roles as doctors and even snipers. One photograph shows paranurses jumping out of a plane into a war zone, strapped with medical supplies to save wounded soldiers.

Kathryn Bernheim became one of 27 American women chosen by the Army Air Force in 1942 to ferry planes in the Women’s Auxiliary Ferrying Service program. As a civilian with more than 1,000 hours of flight experience, Bernheim flew aircraft like the P-47 Thunderbolt, relieving men for combat flying until politics ended the program in 1944. The exhibit showcases her flight jacket, dress uniform and a photo of a smiling Bernheim looking at a map.

Not all women had such dramatic roles, but millions across the U.S. served as postal workers, trash collectors and manufacturers, roles previously held by men.

A 1945 photograph shows 24-year-old Fern Corbett “pinch-hitting as a window washer” 10 floors above a Minneapolis street — a far cry from her original job as the company’s stenographer.

Some women could not risk being as visible in their daring new roles. Female members of the French resistance would load forbidden radios and weapons into the secret compartment of a baby carriage, like one showcased in the collection, risking their lives walking past Nazi occupiers.

Also included in the exhibit is a light green uniform labeled “Lebensborn.” The frock was worn by women associated with the Nazi group tasked with raising the birth rate of Aryan children. The women worked at centers that provided free health care to unmarried mothers often impregnated by SS officers. Many children were adopted by other SS members and their families.

The philosophy of women dedicating their bodies and minds to the Third Reich is even more apparent in three swastika-emblazoned crosses. Women who bore four to five children received a bronze cross; six to seven a silver. Those who birthed eight or more children received a golden cross from Adolf Hitler.

“The Nazis wanted women to be wives and mothers. You see photos of women doing outdoor tasks in great physical shape — this was not so they could fight, but so they could bear children,” says Sue Wilkins, the museum’s education director.

Across the English Channel, more than 640,000 British women served in auxiliary services, performing noncombat work such as handling massive searchlights to spot enemy aircraft intent on bombing British cities. Photos of everyday women working in the Royal Naval Service are starkly contrasted with a photo of then-Princess Elizabeth wearing the uniform of the Auxiliary Territorial Service and working under the hood of a car.

The exhibition is on display through Oct. 7. MKH

FAST FACTS: US National Archives has a lot of World War II info