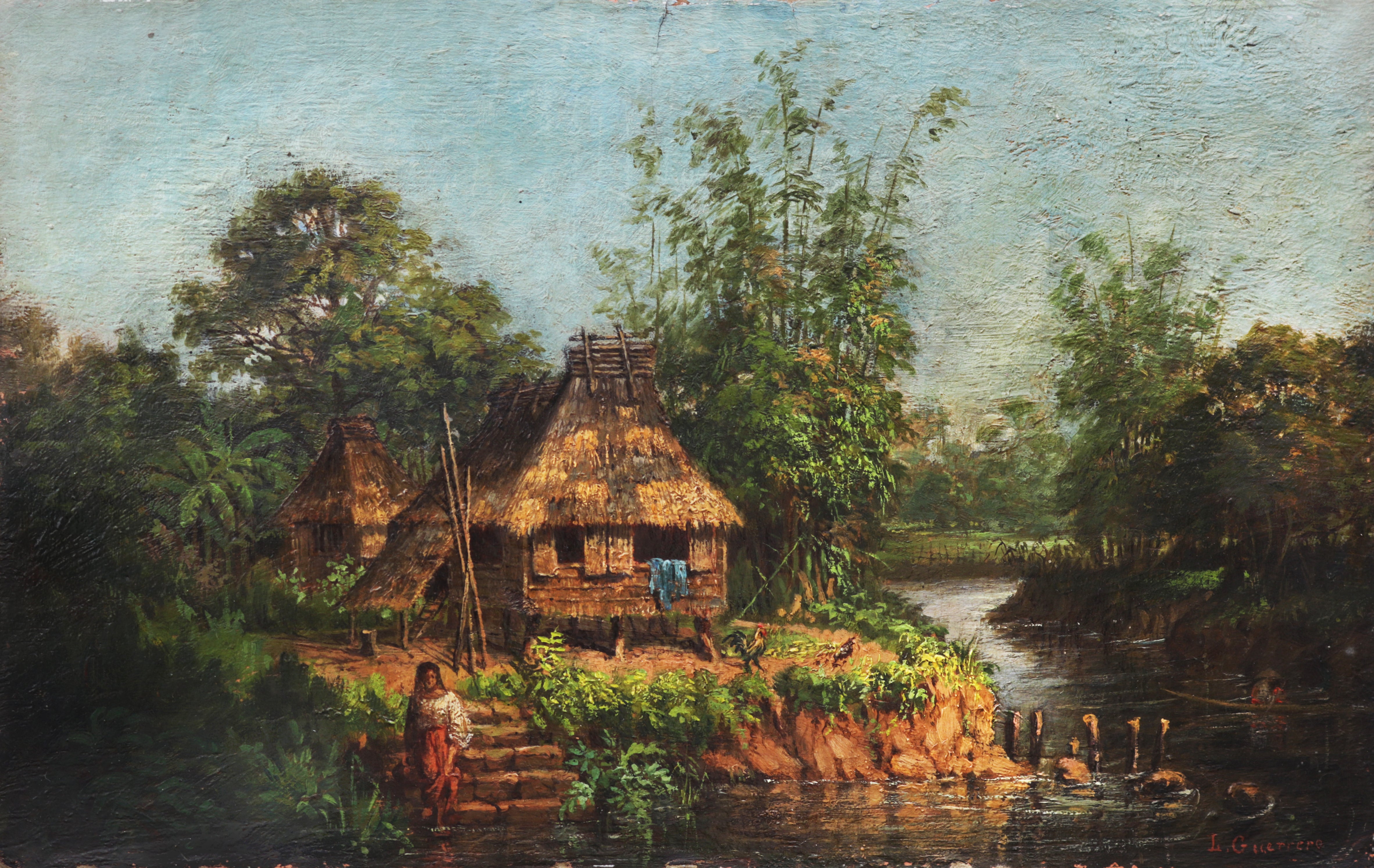 “At River’s Bend,” by Lorenzo Guerrero

A rare local scene by the 19th century Philippine master Lorenzo L. Guerrero, the teacher of Juan Luna and Felix Resurreccion Hidalgo, will be bidded out by León Gallery during its Spectacular Midyear Auction 2018 on June 9.

“The work of Lorenzo Guerrero, named ‘At River’s Bend,’ is an extremely rare example of this master’s work and only one of a handful extant,” León director Jaime Ponce de León said. “It is no doubt one of the highlights in this sale. Lorenzo Guerrero was not only the pivotal figure in the artistic life of Juan Luna, but also a well-accomplished artist in his own right.”

Also to be auctioned off will be Fernando Amorsolo’s “Mango Gatherers” (1931), from the collection of the Condes de Perracamps, related to the Zobel de Ayalas. The beautiful 31 x 33 inches oil painting has a starting bid of P5 million.

A later 1955 similar work, “Under the Mango Tree,” will also be bidded out starting at P2.2 million. Five more Amorsolo paintings will also be on sale, consolidating the reputation of the first National Artist ever to be proclaimed as an auction darling.

Amorsolo’s mentor was Fabian de la Rosa, who in turn was mentored by Guerrero, whose works have come few and far between because they were mostly destroyed during World War II.

One such rare work is “At River’s Bend” (oil, 7 x 11 inches), said to be have been executed circa 1868, according to León consultant Lisa Guerrero Nakpil, a great granddaughter of the artist.

The work may also be the one with a roughly similar title (“River’s Bend”) that had been exhibited along with two other Guerrero works (“Chinese Vendor of Tsin-Tao” and “Scene at a Brook”) during the controversial St. Louis Exposition of 1904, according to E. Arsenio Manuel in his entry on the artist in the Cultural Center of the Philippines Encyclopedia of Philippine Art.

“At River’s Bend” appears to have been saved from the war since its provenance, according to León, is from a “private collection, Madrid, Spain.” Thus, it is another instance of repatriated art.

“This magnificent view could possibly be of the riverbanks of the Pasig, east of Manila— based on this photograph from the German national archive in the collection of Mr. John Tewell,” Lisa Guerrero Nakpil said. (Her great grandfather, the botanist-pharmacist León Ma. Guerrero, was Lorenzo’s brother.)

“Guerrero’s attention to detail is simply immense,” Nakpil added. “In the distance, more posts embedded in the water and a green panorama of more fruit trees and coconuts, detailed in their shapes and leaves. The work could very well be a product of ‘plein-air’ painting, created on the spot, so many are the minute details to be found in the work.”

Ermita-born Lorenzo Guerrero (1835-1904) studied at the Academia de Dibujo y Pintura in Manila where he later taught; among his students were Juan Arellano and Juan V Luna, whom he advised to go abroad to further learn painting as he had nothing anymore to teach the young Ilocano.

Guerrero painted in the transition from religious to secular art, and among his more notable sacred works was “La Transverberacion de Santo Teresa de Jesus (The Transfixion of St. Therese of Jesus), which won the gold medal in the tercentenary celebration of Santa Teresa de Avila in 1882.

His secular works, according to Manuel, depicted the elements, such as “The Fire,” “The Flood,” and “The Storm.”

“The Mango Gatherers” is billed in the León catalog as “The Condes De Peracamps Amorsolo.”

The royal title was given by the King of Spain to business tycoon Antonio Melian (1879–1956) who married Margarita Zobel de Ayala (1881–1963), whose eldest brother was Don Enrique Zobel, father of Georgina Padilla y Zobel.

Social historian Augusto Marcelino Reyes Gonzalez II said Enrique Zobel and Amorosolo were close. “Certainly, the painting came by way of the great friendship between Margarita’s eldest brother and the artist Fernando Amorsolo. It is by far the most beautiful rendition of the theme by the artist.”

She added that authenticator Sylvia Amorsolo-Lazo “has deemed it possibly the first-ever painting with the subject matter, “Under the Mango Tree,” to be done by the grand maestro.”

“The luminosity and tactile quality of this early work can certainly rank it among the first National Artists’ greatest masterpieces,” Ponce de León added.

From the collection of the late Ramon Villegas, the exquisite Niño Dormido is particularly noteworthy. The ivory Child Jesus is from the 18th century while the accoutrements (brass, velvet, shell and mirrored glass bed) are late 19th century. Bidding starts at P300,000.

Another notable lot is the Manila Aparador, which used to from the Romeo Jorge collection. The antique furniture, made around the second quarter of the 19th century, is made of kamagong, narra and lanite.