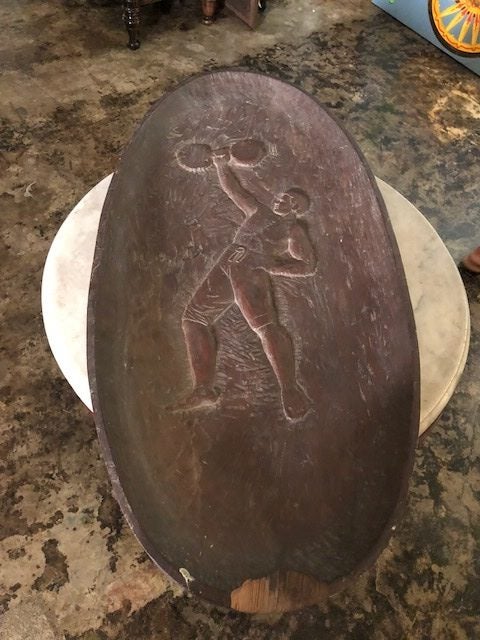 Unique Rizal sculpture– a ‘national treasure’–to be bidded out

An untitled bas-relief done by José Rizal during his Dapitan exile showing what appears a sportsman and bearing striking resemblance to the national hero will be auctioned off on June 9 by León Gallery.

The wooden sculpture comes from the descendants of Narcisa Rizal (1852-1939), the third sibling of the patriot’s family. Narcisa and her daughter Angelica were frequent visitors to Dapitan.

The work shows a full-figure shirtless man in mid-profile raising a dumbbell in his right hand and his left on the hip.

Although untitled, León Gallery has christened the work “The Filipino” and in its Spectacular Midyera Auction 2018 catalogue, calls it “A National Treasure.”

“We are truly grateful for the ultimate privilege to bring to auction a treasure like no other—and by none other than José Rizal: A wood sculpture of the ideal Filipino by the greatest Filipino,” León director Jaime Ponce de León said.

“Intended to be a riposte to the Spanish accusations that Filipinos were slothful savages, ‘The Filipino’ is a virile young man symbolizing our country’s vitality and burgeoning nationhood.

“Having descended from the Rizal Family, this work was last seen by the public in the book, ‘Pictorial Album on Rizal,’ published by the José Rizal National Centennial Commission in 1962,” the León owner said. “It is perhaps the only work done in wood by our national hero.”

León consultant Lisa Guerrero Nakpil, in her auction catalogue article, situates the carving of the work along the 19th-century European obsession with health and fitness.

“This cult for fitness began first in Germany where it became not just an expression of the highest individual development but also as a symbol for nationalism,” Nakpil writes. “A nation was therefore only as strong as its citizens’ health and as beautiful as their well-developed bodies.”

She adds that Rizal imbibed the European spirit. Rizal, Juan Luna and other Filipinos in Europe, in fact, were involved in fencing, boxing and other sports.

Perhaps rebelling against Spanish and European representations of Filipinos as backward and indolent, Rizal presented the Filipino as virile and vigorous. “It was the antithesis of everything José Rizal … stood for: A proud Filipino equal to anybody in the world,” Nakpil writes.

“In fact, upon study of Rizal’s photograph in profile,” she asserts, “a case may even be made that this could be a self-portrait of the hero himself, as truly, the ‘First Filipino,’ not only gifted and mentally acute but also an outstanding physical specimen.”

Bidding will start at P5 million.

“BenCab exudes pictorial nostalgia, transporting one to the past,” the catalogue notes. “He sees himself doing more variations on the old Filipino theme. He works intuitively, always avoiding the risk of limiting himself to a repetitive message. Preoccupied with creating something Filipino, he delves into our rich heritage to unravel the mystery of our identity.

“BenCab always favored using few colors rather than many; deep browns make for the backdrop of the painting. BenCab’s works assert that fewer colors in a painting gave the art greater force and meaning. Bencab’s prison roomscape, keeps the viewer securely within a small, well defined cube of space.”