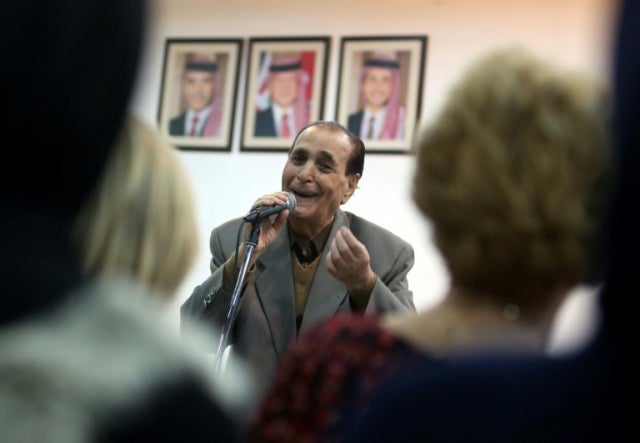 A group of musicians are causing a sensation in Jordan by reviving the golden age of Arab song — and not one of them is under the age of 50.

“I would give you anything for the feast, my angel.”

Beshara Rabadi, 62, sang the line to a enthusiastic crowd at a concert hall in central Amman.

Many instantly recognized the song of famous Iraqi singer, Nazem al-Ghazali, responding with applause and singing the rest of the phrase:

“But you have everything. Should I give you bracelets? I don’t want to tie your hands.”

Beit al-Ruwwad (The House of Pioneers), founded in 2008, celebrates the golden era of Arab music represented by Ghazali and legendary Egyptian diva Umm Kulthum as well as Jordanian folklore songs.

The singers, some of them in their 80s, wear dark suits and in some cases sunglasses as they play a wide range of instruments: oud (Arabian lute), flute, drums and accordion.

Each Tuesday, they give a free concert at Amman’s Al Hussein Cultural Center.

“Our goal is to preserve classical Jordanian and Arab music and provide a comfortable social space that supports original art and artists,” said the group’s founder and leader Sakher Hattar, 54.

A buzz spread throughout the audience as the group performed another well-known song about a girl leaving her family home to get married.

Women raised their hands while an older man spun a cane above his head and tried out a few dance steps.

“I come every Tuesday, I never miss the concert,” said Russayla Bayzidi, 75, sitting in the front row in a white hijab and an elegant electric blue jacket.

“I love these old songs because they take me back to a beautiful time,” she said. “I relax so much when I come to these concerts.”

The group’s fans include people from across Jordanian society and the concerts always have a family atmosphere, said Hattar, who is also an oud teacher and head of the Arabic music department at Jordan’s National Music Conservatory.

He likes to talk of how the group was formed.

He had met officials at the culture ministry to discuss having veteran musicians perform individually at the annual Jerash Festival, which brings artists from across the Arab world.

“They were rejected on the basis that they weren’t able to perform,” he said.

“That idea hurt, and it gave me the idea of setting up the band.”

He set about gathering a group of musicians in their later years, including singers Mohamed Wahib (84), Salwa al-Aas (74) and Fuad Hijazi (70).

“These artists still have a lot to give, they have a really high standard of musicianship,” he said.

In May, 10 years since the group was founded, King Abdullah presented Hattar with an award for the band’s role in supporting pioneering musicians.

Singer Wahib said the group had “brought together pioneers who gave a lot to Jordanian and Arab art.”

“I’ve been passionate about music since my childhood,” he said, adding that he launched his career as a singer on Radio Ramallah in 1958.

The octogenarian, a contemporary of Arab greats such as Mohammad Abdelwahhab and Farid al-Atrash, credits Beit al-Ruwwad with giving him the desire to continue.

“The old songs are different from those of today, and people who come to see us feel that they are transported into the past.”

“We try to create a link between old and new songs.” CC