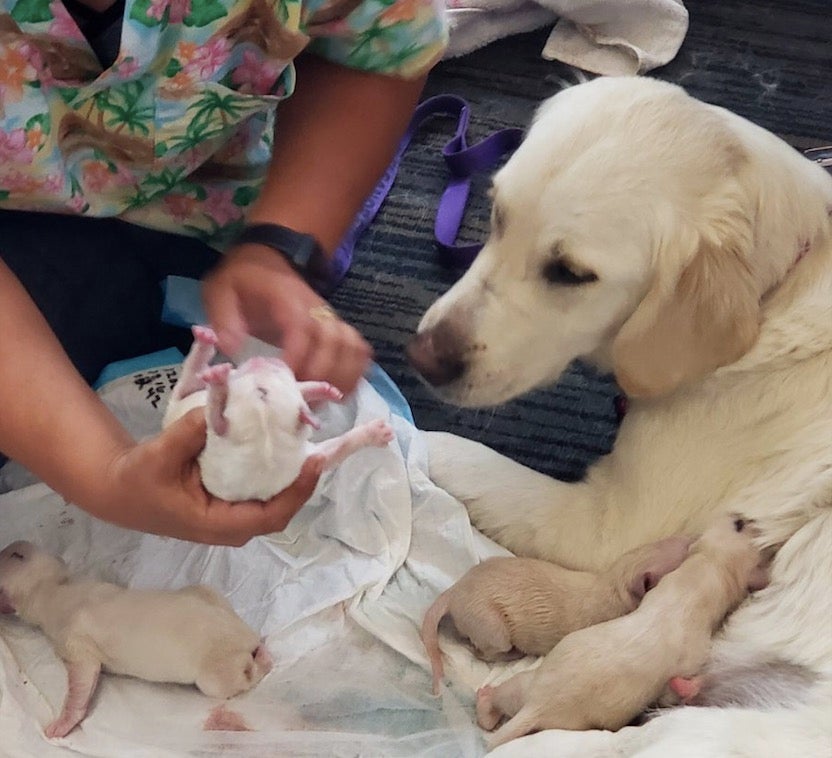 A pregnant service dog in the United States missed her flight to Philadelphia when she went into labor at the airport.

Tampa International Airport authorities rushed to the aid of the two-year-old Labrador service dog Eleanor “Ellie” Rigby, as she gave birth to a litter of eight puppies on May 26.

The airport’s official Facebook page shared several photos and a video of the surprising event. The page stated, “Our Tampa Fire Rescue ARFF (no pun intended) paramedics were on hand to aid the successful deliver[y] of eight pups — seven males, one female.”

Ellie’s owners helped to keep her calm while paramedics caught and attended to her puppies, one after the other.

Nugget, the puppies’ father, accompanied Ellie. He was right beside his mate as rescue workers assisted in the delivery.

Meanwhile, netizens found it odd that the owners opted to travel with a pregnant service dog. They also found it unusual that the service dog could get pregnant.

A netizen from Facebook, Carris A Dougherty, questioned whether Ellie really was a service dog or an emotional support animal. She also pointed out the owner’s apparent lack of responsibility in properly caring for the pregnant animal. The airport representatives replied by saying they were just glad Ellie and her puppies were safe.

On the other hand, netizen Amanda Wrobel from Lisbon Maine said that sometimes service dogs do get bred in hopes of producing more service dogs. But she did agree on the point that the pregnant Ellie should not have been working nor traveling. JB