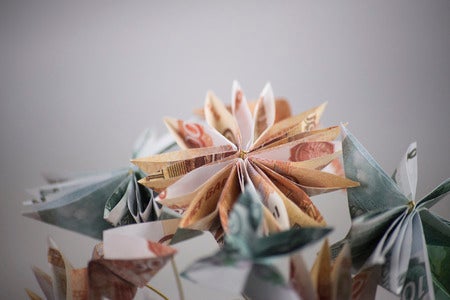 Perhaps the adage “Money can’t buy you love nor happiness” may now be reconsidered, as a man from China flexed his financial muscles and got his girlfriend a bouquet for her birthday — but not just any bouquet.

The unnamed man apparently gave his girlfriend last week a giant bouquet made of banknotes. The banknotes amounted to 334,000 yuan ($52,300 or P2.7 million) and were folded into origami flowers, as per Chongqing Morning Post via the South China Morning Post, May 25.

A person who attended the girl’s birthday party revealed that the bouquet was created by workers from a local florist. “The arrangement took seven people more than 10 hours to complete,” the guest said in the report.

Due to security concerns and the huge amount of money involved, the bouquet was arranged in the venue of the birthday celebration instead.

Despite the pomp and noise created by the banknote bouquet, however, not everybody was sold and rode its hype train. For one, a manager from a branch of the People’s Bank of China mentioned that the boyfriend may be guilty of a criminal offense.

The manager said in the report that “intentional destruction of renminbi, [the formal name for the yuan]” is forbidden and everybody must treasure the renminbi notes. “There are many ways to declare love, but no one should go against the law,” added the manager.

It was not stated, however, if the bank notes were damaged in the process of creating the floral arrangement. Cody Cepeda/JB