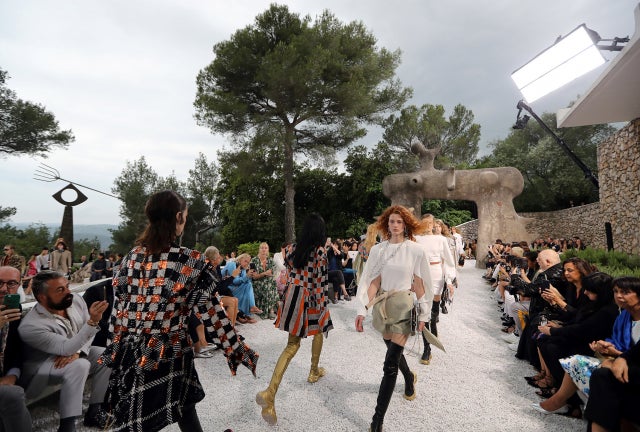 Fashion giant Louis Vuitton bent the knee to legendary Vogue stylist Grace Coddington in a show in rural Provence paying tribute to her daring through the decades.

The Welsh-born creative director at large for American Vogue magazine is credited with creating some of fashion’s “most memorable imagery” and is known as “Amazing Grace” to her many fans.

Vuitton designer Nicolas Ghesquiere even sent several red-haired models weaving down a catwalk between Miro sculptures at the Maeght Foundation art gallery and gardens on Monday in a nod to Coddington’s own trademark mane.

The 77-year-old was the longtime right-hand woman of Vogue editor Anna Wintour, and the star of an acclaimed 2009 documentary about the iconic magazine, “The September Issue”.

Ghesquiere, who has just renewed his contract with fashion’s richest luxury brand, said he wanted to celebrate Coddington’s unique eye, and the way she juxtaposes clothes and designs no one else would dare to.

“Eccentricity is to define your own personality and to mix things in a unique way,” he told AFP. “For me, Grace with her very strong style represents a kind of eccentricity.”

The designer tried to recreate that glorious individuality in 59 looks which covered her time as model in the London of the swinging sixties right up the present.

With Coddington looking on, “Beautiful Mind” star Jennifer Connelly read from her memoir, “Grace”, as the models traipsed around the artworks in the foundation’s gardens at Saint Paul de Vence, in the hills behind the French Riviera.

Connelly’s fellow film stars Emma Stone, Isabelle Huppert and Lea Seydoux were also on the front row to see a collection that was strong on a typically Coddington mix of short skirts, Prince of Wales check jackets and lots of spots, stripes and flower motifs.

Coddington also designed some of the accessories to go with the cruise collection, with her illustrations of dogs and cats intertwined with Louis Vuitton’s famous monogram.

“I also wanted to pay homage to this place, which for me is the genesis of (all the other) art foundations. It is a love story between a family, artists and architecture,” he said.

The Louis Vuitton Foundation opened its own art gallery designed by Frank Gehry in the Bois de Boulogne on the edge of Paris in 2014. NVG