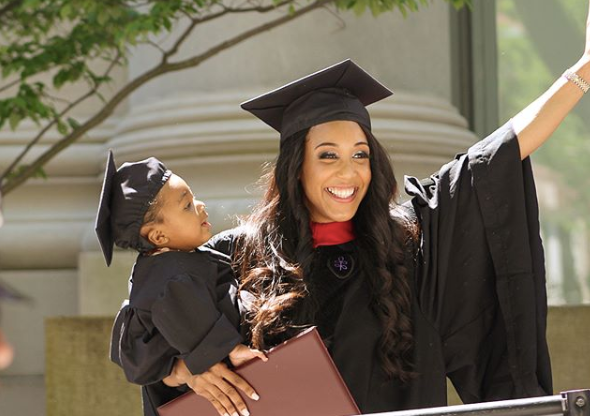 Not many 1-year-olds can say they attended a graduation—and in Harvard Law School, at that.

Little Evelyn, dressed in a toga and an academic cap, earned her spot to be at the commencement exercises: after all, she had attended some classes with her mom, 24-year-old Briana Williams.

Williams, a single mother, was teary-eyed and beamed brightly as she carried Evelyn after receiving her Juris Doctor degree.

“To say that my last year of law school, with a newborn, and as a single mom was a challenge would be an understatement,” she recounted in her Instagram post.

“I went into labor in April—during final exam period. I immediately requested an epidural so that my contractions wouldn’t interfere with my Family Law grade,” she said. “And, with tears in my eyes, I finished it.”

“Some days I was so mentally and emotionally fatigued that I did not leave my bed,” she admitted.

The logistics of having an infant and studying was a challenge, and at times she would leave her baby in a stroller at the Dean of Students’ office to attend class. Otherwise, “Evie” sat in with her.

“I did not think that, at 24 years old, as a single mom, I would be able to get through one of the most intellectually rigorous and challenging positions of my life,” she confessed.

“Thank you for giving me the strength and courage to be invincible,” she wrote to her child. “Let’s keep beating all their odds, baby.”

“I went to college with one suitcase and one pair of shoes, holding on to a bible that my older sister had tucked away in my bag,” she recalled.

When she entered Harvard Law School, she was thrust into an environment with the world’s brightest minds and felt “scared sh*tless” encountering students from other Ivy League schools. She also had more hurdles to face: besides her studies, her time was consumed working as a waitress and bartender “to get by.”

Williams used her smarts and extraordinary opportunity to learn how to uplift the rights of black people and women. During her third year at Harvard Law, she was the communications director for the Harvard Black Law Students Association.

From her minority background, she found a space to be empowered. “I made sure to engage in courses that contextualized the law with my blackness, femininity, and income strata.”

After graduation, she is set to work at  “a top law firm in Los Angeles,” where she plans to take on pro bono cases.

“At first, I was the anomaly of my [marginalized] community. Then, as a single mother, I became a statistic. Next, I pray that for the sake of my baby, I will be an example,” she said.  /ra

Valedictorian banned by Catholic school to speak at graduation; delivers speech outside with megaphone