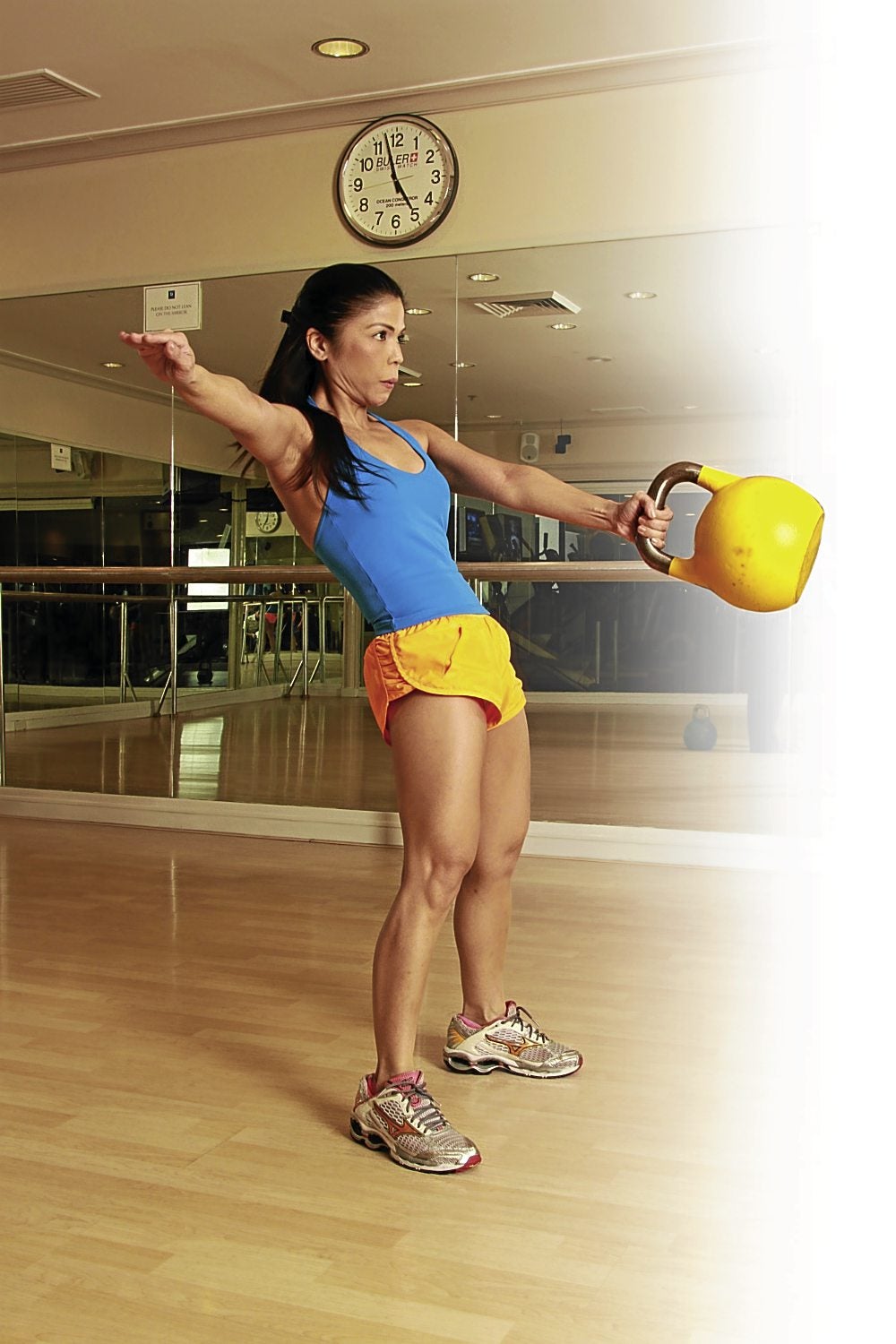 Swing that kettlebell to a fitter, stronger body

Actor Rocco Nacino chiseled his body  to land the cover of Men’s Health and the centerfold of Cosmo Magazine. Petite designer Michele Sison whittled her waistline from 24 inches to 21 ¾ in a month. British executive Mark Andrew Lyndsell dropped from a double extra large to a large in six months.

They got faster results when their personal trainer, Jonnel Cruz, incorporated the kettlebell into their strength-training workouts.

Gym-goers accustomed to streamlined machines or women used to Barbie doll weights might find the kettlebell intimidating.  Although the kettlebell has been used by hard-core bodybuilders, it is now an emerging trend in the Philippines, as  it gives a total body workout.

Invented in Russia, the kettlebell became the workout of choice of soldiers. In America, the women loved it because they got toned  and burned more calories with one piece of equipment. Because it requires attention to engage the stomach muscles to support the back, people claim they easily lost flab around their waists.

Dumbbells  evenly spread weight,  but with kettlebells,   the user is challenged to make controlled movements in an unstable way. Handles enable the user to swing, fling, or hoist the kettlebell in any direction. The quick, explosive movements build power and stamina.

Cruz says if you can’t curl a dumbbell, you can easily do 10 repetitions after a kettlebell workout.  He explains that traditional weight training  isolates muscle. In contrast, the kettlebell method demands the coordination of several muscle groups and the engagement of the core.

“You won’t get bulky, like in traditional weight training,” says Cruz, who got his credentials from the International Kettlebell Fitness Federation.  Since the workout begins with picking up the kettlebell on the floor, it strengthens the lower back. It also strengthens the  shoulders and the  grip. All these muscles are used in day-to-day activities, whether you’re sitting for long hours pounding the computer keyboard or carrying  shopping bags around Greenbelt. It also improves flexibility, because the kettlebell technique involves  moving the body forward and backward, laterally, and rotationally.

In a demo, Cruz swings a kettlebell through his legs, and hefts the weight above his head while coordinating his breathing. He lowers it behind his neck and lifts it again.

Cruz underscores the importance of focus, as there are  possible drawbacks. The weight could slip from the hand,  or it could injure the spine if one doesn’t have the correct form.

Clients at the Edsa Shangri-La Health Club are more than satisfied with the kettlebell workout to augment their program. Mark Andrew Lyndsell,  senior director for European accounts of  Transcom, Europe’s largest BPO, had a very sedentary lifestyle and could only lift 10-lb dumbbells. After  months of working out with Cruz, he could pump 200 lbs and do more challenging kettlebell workouts.

“You can tell that  your muscles respond instantly,  but it’s important to get the technique right. It’s difficult. You need good instruction; otherwise you can hurt yourself,” says Lyndsell. The kettlebell workout firmed up his core muscles and built up his forearm.  After the gym, he’s got more energy and focus to work the odd hours of the BPO life, which starts at 4 p.m.

When Lyndsell joined a competition among the members of Edsa Shang’s Health Club, he even beat the pro athletes in speed and stamina.

Lyndsell points out that the success of the workout also lies in the trainer. “I’ve had other trainers in the UK, but none of them had as much impact on me physically and mentally as Jonnel. Most trainers  follow one set of guidelines. There’s no adaptation to the individual. Jonnel uses a different approach for every client. I don’t know what I’m doing on any given day on training with him.”

Pushing 42 in April, Lyndsell is more fit than people half his age. BPO employees tend to have an unhealthy lifestyle with smoking, junk food and no exercise. “I’ve got to lead by example,” he declares.

Michele Sison, 43, observed that her son, Gio Quintos, looked fit after training with Cruz. Sison herself had been working out since her teens. However, the 4’10” designer got too bulky, making her look shorter and stockier. Under Cruz’s supervision, she developed a longer, streamlined silhouette and took six small meals a day instead of skipping them.

“I just don’t want to look good, I want to be strong,” she says. “The kettlebell workout, it quickly made my muscles taut, especially the core and legs. I’m lazy doing squats, but this works a lot on the legs. I was never coordinated. The kettlebell improved my coordination and sense of rhythm. I feel  taller because I stand better. This workout is increases my energy level in the month of ‘Dress-ember’ stress. If I don’t exercise, I get grumpy.”

Cruz says Michele and Gio aspire to be like  the designer’s dad, lawyer Antero Sison, the septuagenarian, who could out-hike anybody.

Actor  Rocco Nacino (whose credits include “My Househusband,” the indie “Madaling Araw, Mahabang Gabi,” and the TV show “Time of My Life”)  says Cruz was the only trainer who was able to get his gut out. “I got my six-pack abs with the right workout and diet—no rice, less meat, mostly fish, vegetables and kamote.”

Initially, he thought the kettlebell looked ridiculous, but when he tried it, he described the training as torture. “It targets everything in one go.”

He says that it’s a great cardio workout because  90 seconds of successive, ballistic movements are equivalent to running for 30 minutes on the treadmill.

“I’m  going to get a kettlebell (standard 15 kg) to bring to taping,  because it’s handy. I can put it in my car and do a simple workout between takes.”