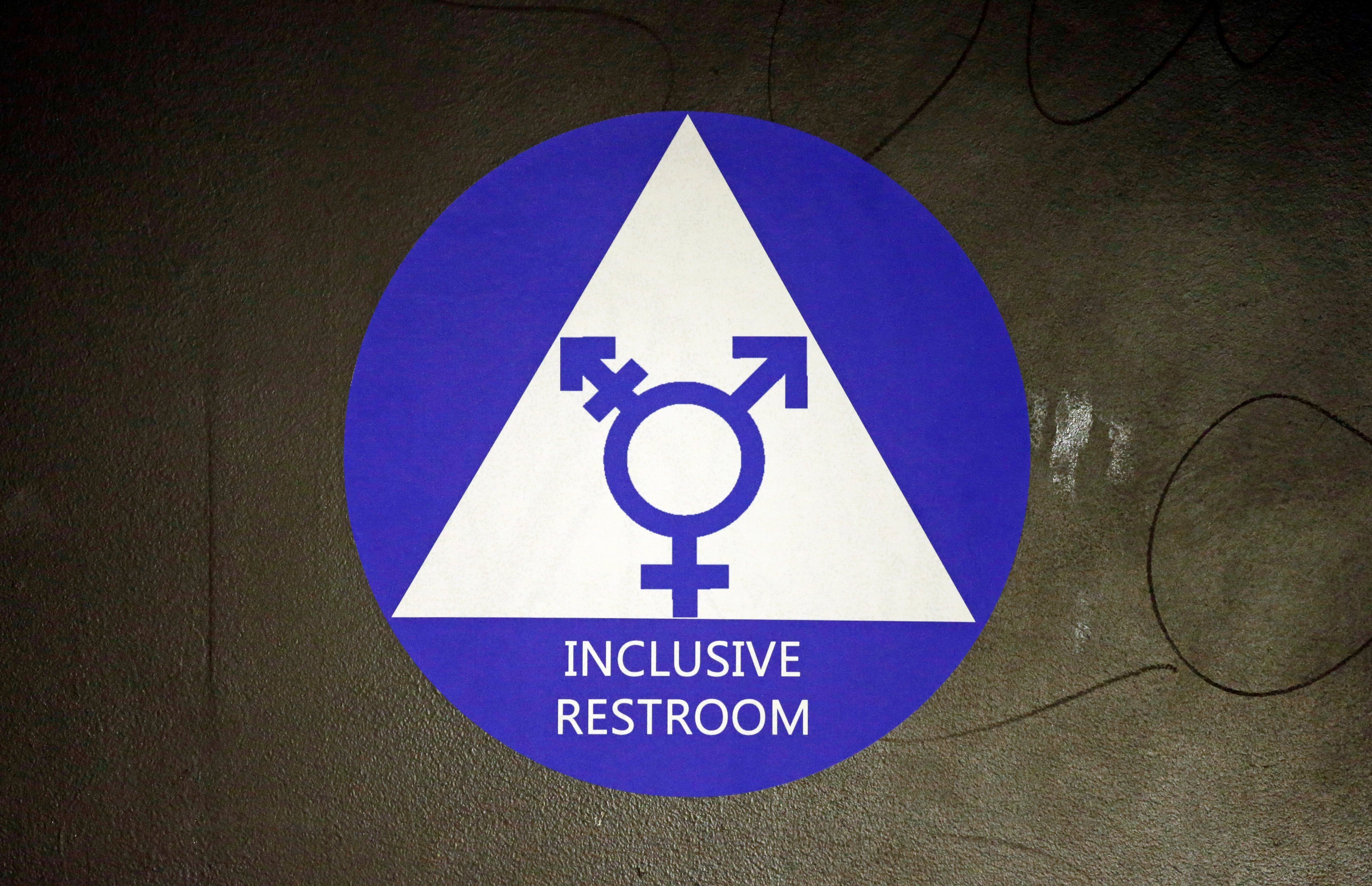 In this May 17, 2016, file photo, a new sticker designates a gender neutral bathroom at Nathan Hale high school in Seattle. On college campuses and in workplaces, across social media and in deference to nonbinary people, gender-neutral pronouns are more than just a new wave of political correctness. Pronouns “they” and “them” seem to be winning the race of acceptance as gender neutrals. Image: AP/Elaine Thompson

NEW YORK (AP) — On college campuses and in workplaces, across social media and in deference to non-binary people, gender-neutral pronouns are more than just a new wave of political correctness.

They’re the focus of debate that stretches back hundreds of years.

Early word coiners were usually more concerned with grammatical correctness over a keen commitment to inclusivity in avoiding the generic “he” and singular “they” as a replacement, said professor Dennis Baron, who specializes in the history of the English language at the University of Illinois in Champaign-Urbana.

But as the women’s rights movement grew in the late 19th century, so did interest in “common-gender” pronouns. They were a hot topic then as they are now.

Feminist leaders argued, amid an effort to make “he” a generic, that such a broadening of gender scope automatically made women worthy of the vote. In 1884, the invented pronoun “thon” was publicized by the coiner, C.C. Converse, as an expedient pronoun for all genders.

“Thon made a lot of headlines. It was discussed nationally. But most of these words were kind of flash in the pan words that got invented locally and went nowhere,” Baron said.

Converse’s word was a blend of “that” and “one.” Among the reasons he cited for creating it was to hide gender altogether or when gender was unknown, Baron said.

The struggle for neutral pronouns reared at other times as well.

In 1886, a Maryland Supreme Court decision found that “he” in a state statute covering admission to the bar referred only to males, precluding women from practicing law. In 1916, self-avowed experts declared that the use of “he” in reference to a particular section of the U.S. Constitution barred women from serving in Congress. The argument didn’t hold and Montana’s Jeanette Rankin became the first woman elected to the House, said Baron, who tweets on language issues as @DrGrammar and has written a book, “Grammar and Gender”.

Before Rankin, in 1789, William H. Marshall recorded the existence of the singular “ou,” as in “Ou (ooh) will,” Baron said. It expressed either “he will,” ”she will” or “it will.” There are references to “ou” as an indeterminate pronoun as early as 1792, but it didn’t widely catch on.

Both the Oxford English Dictionary and Joseph Wright’s English Dialect Dictionary included the use of “a” for “he,” ”she,” ”it,” ”they” and even “I,” he said.

By 1808, invented pronouns were flying, met by the grammar establishment with disdain. “It was like, get a life, don’t quit your day job,” Baron joked.

Further back, by the 12th and 13th centuries, masculine and feminine pronouns developed to a point where, according to the OED, they were “almost or wholly indistinguishable in pronunciation,” beginning as “he (hay), heo (hayo) and hit (hit). The H’s slowly grew silent, rendering them neutrals. The modern feminine “she” first appears in the mid-12th century, seemingly — at least in part — to fight against ambiguity over gender, Baron said.

Baron has collected more than 100 pronouns, invented or repurposed, making the rounds today, and the list is growing.

“From what I can see the invented pronouns are interesting but their use is limited,” he said.

Among today’s words that already existed, the singular “they” is winning the popularity contest as a gender neutral, Baron said. The American Dialect Society named it word of the year in 2015, but the word first surfaced as a neutral singular pronoun as far back as the 17th century, to the dismay of some grammarians at a time when “thee, thou, thy” began falling by the wayside.

“One of the advantages today is that it’s already there,” Baron said of “they”.

Among invented options: Ze/hir (Tyler ate hir food because ze was hungry) — ze pronounced like “zee” and hir as “here.”

Similar early efforts on neutrality caused a dustup in 1912, reported the Chicago Tribune. Ella Flagg Young, who was that city’s schools superintendent and president of the National Education Association, claimed to have invented “he’er, him’er, his’er and his’er’s. She made headlines when she used them in a speech before school principals, earning gasps from the crowd.

Fred S. Pond of Chicago didn’t take kindly to the notion that Young came up with the words, saying he proposed “he-er, his-er, him-er, hisers and himerself” in a letter to the Mansfield, Ohio, News-Journal, published March 21, 1911, Baron said.

Young later admitted to discussing the words with Pond before her speech, offering him joint credit. Pond’s reasoning: The generic “he” is inadequate, the singular “they” substitutes one “error” for another and the construction “he or she” is awkward. He acknowledged that his blends of masculine and feminine “sound strange and perchance ludicrous” but eventually would “enable the speaker — whoever he-er may be — to be correct and intelligible.”

Other languages are also taking on the pronoun wars. They include Swedish. A gender-neutral pronoun was accepted into the Swedish Academy Dictionary about three years ago.

Many English speakers today have no idea that neutral pronouns were on the cultural radar centuries ago, Baron said.

“The question today is are we in a blip or is this going to get stronger,” he said. “What’s working against it getting stronger is the lack of agreement on what pronoun. If everybody got behind one pronoun, that would give it a fighting chance.”

Marcelle Richards, 35, of Minneapolis is a non-binary person who uses “they” and “them.” Richards falls “under the trans umbrella” but is gender fluid.

“This is all very personal for people,” Richards said. “I haven’t been able to get everybody in my life onboard. It’s an energy thing for me. Which battles do I want to pick?”

Shane Henise, who creates media campaigns related to the trans community for GLAAD, an LGBTQ watchdog organization, uses the pronouns “he” and “him.” Pronouns, he said, are particularly important to non-binary people like Richards who don’t identify strictly as man or woman.

“We need to start normalizing asking for pronouns, not just for non-binary trans people but in daily life,” Henise said. “Why not include your pronouns in your signature on your email? Another thing that we can do is include pronouns when we’re introducing people, so I would say, ‘My name is Shane. I use he/him pronouns. What about you?'” CC