Coming up: A musical on the Miracle of Guadalupe | Inquirer Lifestyle ❮ ❯ 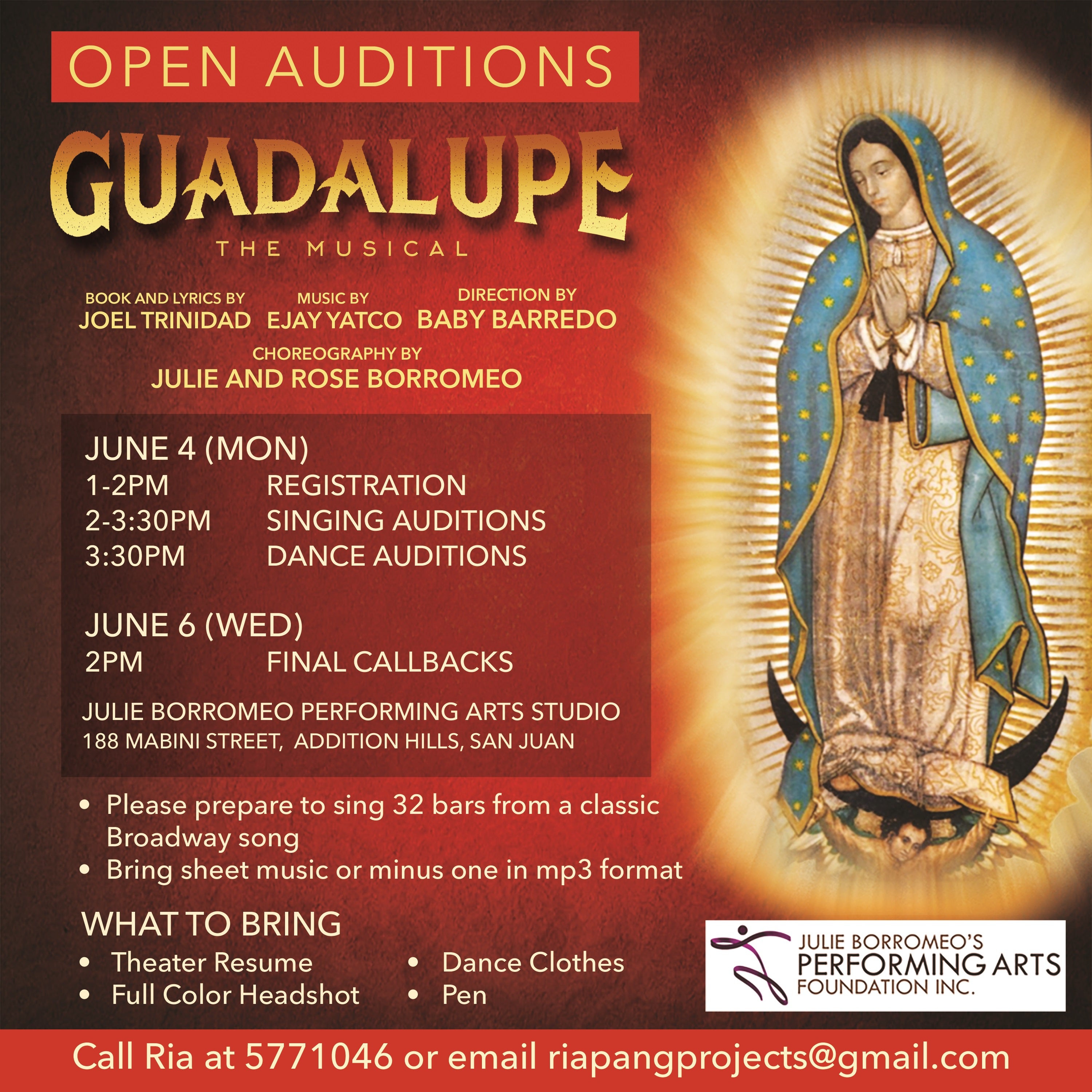 Coming up: A musical on the Miracle of Guadalupe In January 2015, I was approached by performing arts legends Baby Barredo and Julie Borromeo to create an all-new English-language musical based on the 1531 Guadalupe miracle, one of the famous Marian apparitions.

At the time Tita Baby and Tita Julie contacted me, I knew very little about the story of Our Lady of Guadalupe—not even that she was the patron saint of the Philippines! But it didn’t matter: What I didn’t know, I could learn. Like any serious writer, I began to do extensive research on the project.

The more I read about the story, the more fascinated I became: a ghostly apparition, a brutal and sadistic governor, an oppressed people on the brink of revolution, a dying man inexplicably healed… It was practically a show already!

In the meantime, the musical wunderkind Ejay Yatco had been handpicked by Tita Baby to compose the music for the show. I began collaborating with him almost immediately.

I’d throw him some lyrics for a song and he’d set them to music. Then together we’d present the song to Tita Baby, Tita Julie, and the rest of the producers (Guadalupe devotees all). They would give their comments, I’d revise the lyrics, Ejay would revise the music, and we’d present the new version of the song a few days later.

All the while, I was writing the script around the songs as they were being completed, adding historical details and deleting scenes, streamlining characters and refining dialogue. The more I worked on the story, the more I learned; and the more I learned, the less skeptical about miracles I became.

Maybe this whole Guadalupe thing was a bona fide miracle, after all.

The events supposedly occurred in Guadalupe, Mexico, (then known as New Spain) in 1531, and is about the Aztec mat-weaver Juan Diego and his well-documented encounter with a ghostly apparition.

Finally, in late 2017, “Guadalupe: The Musical” was ready. Ejay and I asked some of our most talented performer friends to do a kind of radio drama version of the show for the producers, also known as a “table read.” (As a method for determining what works—and what doesn’t work—in a script, a table read is one of the best tools available for a playwright. Scripts, you see, are meant to be performed rather than read. Consequently, you can learn a lot more from a table read than you can from just reading a script on your own.)

Of all the things I myself learned in that first table read, the most important thing was that… the show was terrible. The problem was not the performers (who were all amazing), or the music (which everyone loved), or the story (which was exciting on its own).

The problem was the script itself. Unimaginative and lifeless, it sounded like a history lesson conducted by a tired old teacher who had lost his will to live. So it was back to the drawing board for me. (Thank God the table read showed me exactly what needed fixing.)

Finally, after six more months of research, rejection and revision, the new and improved script for “Guadalupe: The Musical” was done. By that time, I had been working on the show for more than three years, and my natural skepticism had long since begun to erode.

Where, after all, did those roses come from, and how did they bloom in such a harsh climate—in the wintertime? How did Juan Diego’s uncle come back from the brink of death? How did that vivid image of the Virgin appear on his apron? How was it that the pigments used in that image were unknown to science? And how did that same apron remain undamaged by time, weather and even bombs?

Every one of these things is beyond the realm of science to explain. Doesn’t that mean they are all, in fact, miracles?

I’ll never truly know. All I did know, after the second table read, was that this version of the musical was the one I wanted to share with the world. The script for “Guadalupe: The Musical” was finally done.

Auditionees are requested to bring 32 bars of a classic Broadway song; appropriate sheet music or minus one (in MP3 format); theater resumé; full-color headshot; dance clothes; and a pen.

Callbacks will be on June 6 (2 p.m. onwards). —CONTRIBUTED