Wedding bells ring in the month of June 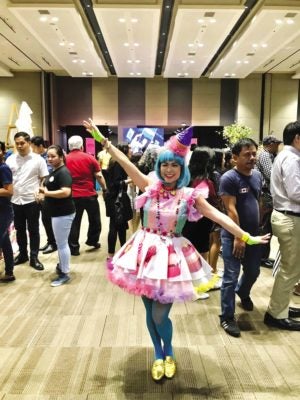 My family and I are welcoming June this year with much love and gratefulness.

In two weeks, we’ll witness the first wedding in the family. Our eldest son Bryan Prieto will wed his fiancée Tinkay Crespo on beautiful Balesin Island. A week after that, Dennis and I will celebrate our 24th wedding anniversary at La Mère Poulard Restaurant in SM Aura Premier.

For one of the bridal showers of Tinkay, SM Accessories generously gave special headphones and tropical-design pouches as prizes and giveaways.

My sister Sandy Romualdez and I also gathered some of the top desserts at the recently launched Inquirer Lifestyle’s “Best Desserts Book 4.”

SM VP Millie Dizon and Lifestyle writer and “Best Desserts” author Vangie Baga-Reyes awarded certificates to all the participating dessert makers who brought samples for guests to try. By the time cohost Pam Pastor and I were done with the awarding, we were hyper-jumping for joy from all the sugar we consumed.

The coconut crème was most in demand, while the coconut-shaped floral arrangement was another cynosure in itself!

Crystal Dragon also showcased its signature mooncakes at the luxury resort’s impressive booth to toast the upcoming Mooncake Festival. The Snowskin variety with ube filling and baked double yolk with lotus filling were the stars, with a chef making snowskin mooncakes on the spot.

From the colorful cupcake costume that Claire Porcadilla of Tiddletots made for me, I donned another outfit for the opening of Sogni Di Vetro Murano Showroom in Okada Manila.

Murano Showroom owner Marco Roberto Ascione, with his partner Olah Gray Brady, were delighted to host their VIP guests for dinner at La Piazza Italian Restaurant in the same hotel after the ribbon-cutting ceremony.

It was, indeed, a momentous night, a repeat of an event from 25 years ago during the first exhibit of Marco Roberto in Manila Hotel, when Ms Marcos also cut the ribbon.

The night continued with a double birthday celebration of Marco Roberto and ballroom queen Becky Garcia at a sit-down dinner party at La Piazza in Okada. This was made possible by the assistance of Severino Mendoza, Okada Manila senior manager of retail and leasing, and Gianluca Vigentini.

The night was astonishing as many guests broke into song, led by lawyer Sal Panelo, followed by Ms Marcos and her favorite tune, “Gaano Ko Ikaw Kamahal.”

In true Italian birthday fashion, Marco Roberto sang his favorite romantic Italian songs, followed by Dr. George Sarakinis, who wowed the guests with his classic Elvis Presley impressions. It was so charming that everyone was clamoring for more.

There was also a special, lavish gift of Imperial beluga caviar presented to the ribbon cutters, thanks to Caroline Fuerte, owner of Imperial Caviar.

Let me end with a special note on a celebration of time, history and altruism. Salcedo Auctions’ subsidiary, gavel & block, recently concluded its theme-based, contemporary auctions, “12,” “history” and “benefit.”

The first auction, “12,” featured collections of Rolex and Patek Philippe. The second, “history,” consisted of over 200 Philippine paintings and sculptures spanning over a century of art. The finale, “benefit,” showcased works by Filipino and contemporary artists to raise funds for the Vicky SyCip Herrera Filipino Scholarship at International School Manila.

The lucky bidders for “12” were able to obtain such vintage pieces as a mint condition, famed Patek Philippe ref. 5496 Perpetual Calendar in platinum.

Other highlights included three Rolex watches, an Explorer I with a gilt tropical dial, a Sea Dweller 2000 open “6,” and an Oyster Perpetual Cosmograph “Daytona Cerachrom” with a rare white dial.

As for “history,” art enthusiasts outbid the fun-loving party set as they competed for works by Ronald Ventura, Salvador Dali, and Romulo O.

A live performance by Kiana Valenciano with sets by DJs Nix Damn P! and Gian Romano further energized the crowd that packed the venue.

Of course, the grand finale was, for me, “benefit,” which successfully raised more than P3 million for Pinoy scholars at ISM. Kudos to all the auction-goers and Salcedo Auctions on your great events.