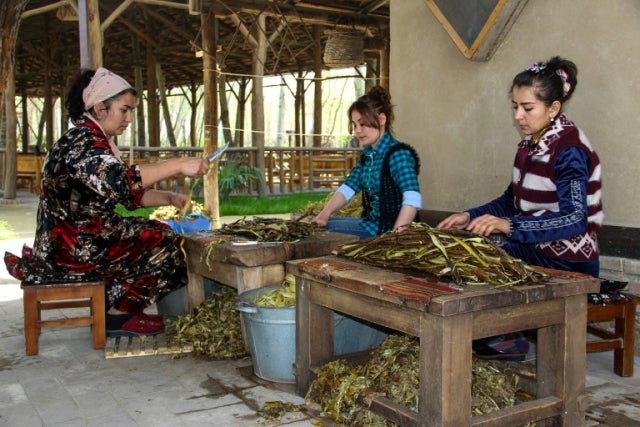 The passage of time seems to have slowed down at Zarif Mukhtarov’s paper mill in a village not far from ex-Soviet Uzbekistan’s silk road city, Samarkand.

Here in the countryside, where rulers of the Timurid Empire once sought a verdant sanctuary from their bustling capital, geese sidle by in pairs and tourists feast on pilau made with local rice from clay-rich soil.

Mukhtarov, a 62-year-old Samarkand native, was a potter like his father before he set about reviving a paper-making technique coveted for centuries by much of the known world.

Nowadays, he says, the legendary paper once produced in Samarkand has been consigned to history by the bland, white, industrial-made stuff and, of course, computers.

But that doesn’t stop thousands of guests arriving at his door every year in the village of Koni Ghil, which has become a must-stop on the country’s growing tourist trail.

“Foreign guests come here to learn more about our traditions and our history,” said Mukhtarov.

“Local people come here to learn about themselves,” he added, as his kite-flying, eight-year-old granddaughter Mekhrubon tore around the workers’ yard in a blur of color.

The story of how Samarkand emerged as a global paper-making center is a favorite among historians who study the rise and fall of ancient trade routes linking East Asia and Europe, even if they admit the precise details are hazy.

Production there began sometime in the second half of the eighth century AD after Chinese troops invaded Central Asia but were defeated by forces under the control of Abu Muslim, a general of the Arab Abbasid caliphate.

“Among the Chinese (prisoners) captured were masters in the art of making paper,” says Makhmud Nasrullayev, a historian at the University of Samarkand.

“In return for their lives being spared, they brought to Samarkand their secret of paper,” said Nasrullayev.

What separated Samarkand’s paper from the Chinese version and saw it gradually displace papyrus across Europe and the Middle East in the coming centuries was its smooth, glossy finish.

This meant that it absorbed less ink and could, therefore, be used for writing on both sides.

The paper produced in Samarkand’s mills was also far more durable than papyrus.

“Samarkand paper was polished with the help of an agate stone,” said Mukhtarov, the mill owner, whose paper is the superior of three kinds produced at Samarkand’s mills until the 19th century, when the city fell under tsarist control.

“The Chinese didn’t need to polish their paper because they used brushes to write instead of quills,” he added.

From pulp to paper

Mukhtarov’s paper comes from the branches of young mulberry trees that are indigenous to Uzbekistan and also used in the production of silk.

The branches are cleaned of their bark and peeled into long, fibrous strands that are boiled in a cast-iron pot for four to five hours.

The mixture is then pounded to pulp by a trip hammer powered by a quaint, wooden watermill before it is dried and polished.

This gruelling process in some way reflects Mukhtarov’s own journey to become an off-the-beaten-track gem on the Uzbek tourism circuit, dominated by striking Islamic architecture in cities like Samarkand and its sisters Bukhara and Khiva.

Mukhtarov first began building his paper mill in 2001 but it was only two years ago that it fully returned the investments made by his family.

“We had to borrow money from sisters, brothers, cousins. Our relatives sometimes asked: ‘What do we need this (paper) for? Better to find some other type of work’!”

Nowadays, nobody questions Mukhtarov’s vision for the family business, especially as Uzbekistan’s government inches away from over two decades of isolation under late ruler Islam Karimov by relaxing restrictions on tourism.

But the master craftsman says he is not content to stop at paper production as he beats a path back through the region’s storied past.

One project he is currently planning is a new wooden mill to press oil from walnuts and flaxseed, which will be used in the pilau he serves to visitors.

“Tourists will witness the birth of plov (local name for pilau) before their very eyes!” he exclaimed with enthusiasm. NVG